a great Trento wins by authority over Varese 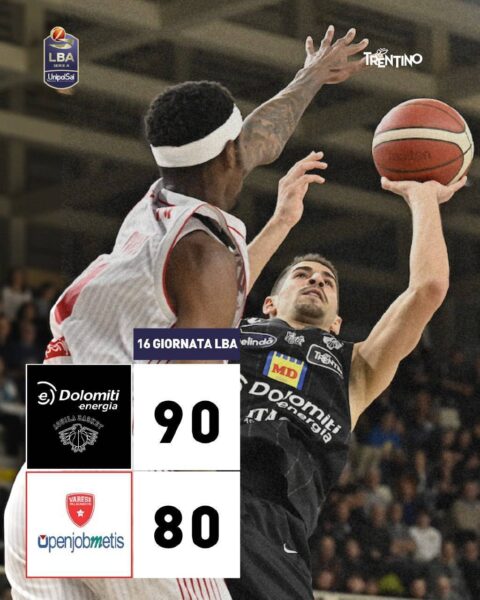 Trento, 22 January 2023 – The Dolomites Energy Trentino closes the triplet of matches to BLM Group Arena with a success in direct confrontation with the OpenJobMetis Varese. The blacks and whites thus win both direct clashes with Varese after the great success of the first leg. The Trentino players put an excellent offensive performance on the scoresheet, exceeding the 90 points scored for the third time this season (two of which with Varese, ed) at the same time forcing Varese to its worst offensive performance of the year. An important victory also for the standings: Trento, in fact, thanks to the double victory in the direct clashes with the white-reds, takes 5th place in the standings.

Dolomiti Energia Trentino probably played the best match, offensively speaking, of the whole championship. The numbers come in handy: the 28 points in the first quarter are the best run of the whole season, as are the 51 points at the end of the first half. Finally the excellent defense of coach Molin’s boys was paired with a worthy attack: especially the 8/22 from three points, despite not being a large percentage, helped in the enterprise. Half of Trento’s bombs came from Andrew Crawfordwho with a wonderful 4/6 from three points does what he was criticized for in the week after the defeat of EuroCup. Crawford is and should be primarily one scorer and today he proved it: the 17 points confirm it. Shooting very well too Matthew Spanish and a surprising Darion Atkins, authors of two triples each. The Real Madrid-owned youngster finishes with 15 points, 2 steals and 3 assists while the #44 totals 16 points and 5 rebounds.

A decidedly “no” evening for the best attack in our league. After the advantage in the first stages of the match, Varese was forced to chase, suffering a lot from Trento’s excellent defense. The hosts played a suffocating defense, which didn’t allow coach Brase’s men to run on the counterattack and find good shooting solutions. In fact, the 9/28 with heavy shooting comes mainly from shots taken by being satisfied by Varese, often unable to find the right passage. After sinking to -16 twice during the game, the guests raised their defensive intensity a lot, forcing Trento into a last quarter with just 16 points. Furthermore, the triples have begun to enter for Varese, who is therefore able to come back up to -5. Then the lack of team play and the bad evenings of the Americans meant that the Lombards lost the match. A heavy stone on the Varese defeat undoubtedly lies in the free throws: a miserable 19/32 (59.4%) for the team.

Ross is immediately protagonist with the assist for Owens and then with the penetration that immediately leads to the initial 0-4. Lockett unlocks the score for his, then helped by the Spanish basket and the triple by Atkins that give Trentino the first lead on 7-6. Trento’s long scores another bomb on Flaccadori’s discharge, followed by that of Spagnolo for +5. Baskets from Grazulis and Flaccadori bring the score to 17-8, thus forcing Brase into the first timeout of the evening. Crawford’s 2+1 and Forray’s penetration make it +13 for the hosts, who then suffers Brown’s triple and Caruso’s basket, thus closing the fourth ahead 28-16.

The second period opens with the basket of an inspired Spaniard, who gives +14 to his team. After a few pushes and pulls, up to the maximum advantage of the match arrived at 43-27 thanks to Lockett’s free throws. After that some revisable choices of Trento’s defense and the triples scored by Varese, the white-reds go to -9. Trento raises his head slightly, but the foul problems do not help coach Molin, forced to timeout after the triple of -8 scored by a revived Ross. Atkins’ basket brings Trento back up +10 at the end of the first half (51-41).

Trento starts the second half with a nice 7-2 run, with Varese responding thanks to a basket from a throw-in by Ross and a 3/3 shot by Johnson from the line after a naive foul by Lockett. Atkins’ 6 consecutive points and Flaccadori’s average shot bring the result to 66-50, the second +16 of the match. Crawford’s two triples close the third period with the round result of 74-60.

The final period opens with triples by Brown and Reyes in rapid succession, which lead to a partial 0-6 and a worrying -8 for the guests. The hook from Atkins’ post brings Trento back to a double-digit lead, but Johnson’s emergency bomb says -7. Flaccadori scores an emergency shot as a true leader, but the two fouls in rapid succession by Atkins cause Trento to use up the bonus. Ross’s runner and Brown’s two free throws lead the match to only 5 lengths apart, but Flaccadori’s 4 consecutive points give back some oxygen to Aquila. The waltz of free throws leads to a dunk by Grazulis in the final seconds, with Trento winning their ninth game of the season 90-80.

“It was a game to win and we did it in style. We controlled the match for practically its entire duration, always staying ahead in the score. The team gave a great sign of reaction because we were aggressive on both sides of the court, limiting the best offense in the LBA. In attack we played some quality possessions.”

“Congratulations to Trento, who played with great physicality and energy today. We suffered too much from their game and we were forced to chase throughout the game. In the last quarter we managed to get back to -5 but then Trento distanced itself thanks to offensive rebounds. It was not our best performance: that serves as a lesson for us.”

Matthew Spanish 7.5: fundamental with 9 points in the first quarter alone, he proved to be unstoppable from the dribble. Spanish then spent the rest of the game in the shadows, making some mistakes but also totaling 2 steals and 3 assists.

Toto Forray 7: the same desire as always, this time with more sensible shooting choices. The captain finished with 7 points, 3 rebounds and 3 assists.

Diego Flaccador 6.5: 12 points with a horrendous 0/4 from three points, but in the fourth period when Varese dangerously got closer, Flaccadori responded present with 6 fundamental points.

Mattia Udom 5: 11 minutes of little and nothing, if not the 4 fouls that certainly didn’t help a team already in difficulty from that point of view.

Andrew Crawford 8: 17/5/3 and a 23 rating, but Crawford’s game goes way beyond that. In the EuroCup defeat he didn’t take responsibility for shooting, he’s the best in the team. Today a great 4/6 from the bow with excellent choices, always in control. He is the creator of this Trento.

Andrejs Grazulis 7: 12 points with 7 rebounds, 4 of them offensive. Grazulis is one of the reasons why Trento won, thanks to the extra possessions often exploited to the fullest.

Darion Atkins 7: less dominant than usual, but Atkins is always a great presence under the basket. The two triples scored in the first quarter helped Trento’s spacing. Excellent data is that of the 4 assists, thus demonstrating that he also takes good care of the ball. The only note of demerit is the technician for the reaction he had.

Trent Lockett 6.5: a lot of physicality and desire, he is proving to be one of the inevitable for coach Molin. Lockett finished the game with 7 points and 5 rebounds.

Colbey Ross 5: out of the match, he alternated good moments with total chaos. The 16 points are a good figure, as are the 4 assists, but the 1/5 three-pointer reflects Varese’s shooting difficulties.

Andriu Tomas Woldetensae 4.5: did more damage than good. Only 2 points in 21 minutes for a player who started in the starting lineup is not a sufficient contribution.

Giovanni De Nicolao 6.5: the only one in Varese with a good shooting evening. 2/2 from the arc and 6 total points, even if he gave the Trento players a lot physically.

Justin Reyes 5.5: same speech of Ross, with the extenuating circumstance that Reyes is only in his second game after returning from injury. 1/5 revisable from arc.

Markel Brown 6.5: the best of the Americans of Varese. Not bad at shooting: 3/7 from three points and 5/6 in the line, certainly the most present in attack. A good figure that of the 4 assists, but the 4 turnovers weigh.

Guglielmo Caruso 5: not a great free thrower (61% in season, ed), but 1/6 of this evening is really embarrassing. However, Caruso was underutilized tonight even though he did some good things on the pitch.

Tariq Owens 6: too little involved in attack considering only 8 points. He suffered, like everyone else, the physicality of Atkins. On the other hand, he did very well under the basket, especially in defense: there are 12 rebounds at the end of the game, 10 of which are under his own iron.

Jaron Johnson 5.5: too little continuous during the 40′. In a bad evening for all of coach Brase’s Americans, a more cynical Johnson was needed, who still finished with 15 points. 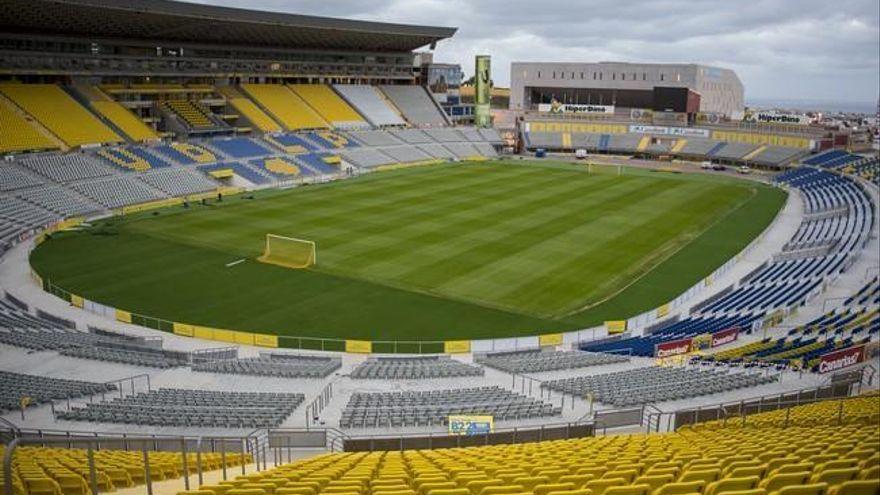 the Super 20 will have a Tucuman tune 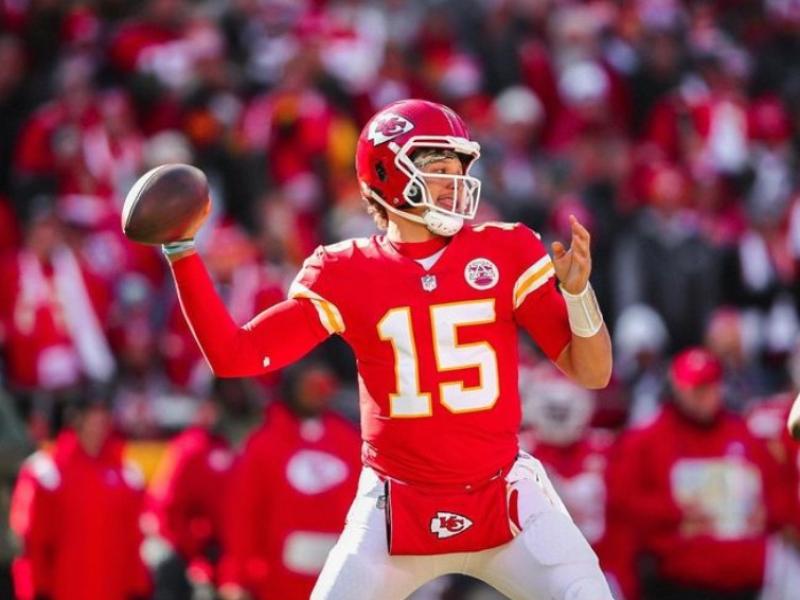