Italy-Spain in Pesaro, one more step towards the World Cup (9:00 p.m., Teledeporte) 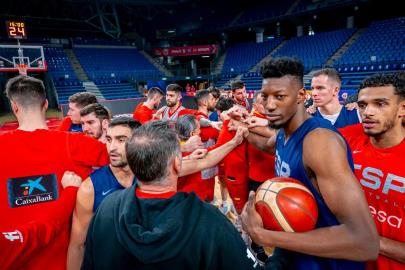 Italy-Spain in Pesaro, one more step towards the World Cup (9:00 p.m., Teledeporte)

Spain disputes this Friday in Pesaro against Italy the first of their two matches in the November Window. At stake is the leadership of the group and the opportunity to take a practically definitive step towards the 2023 World Cup. The match will be broadcast live by Teledeporte (9:00 p.m.).

Spain is already in Pesaro, where it has traveled this Thursday after its first two and a half days of training in Bologna and where this Friday it will play against Italy (9:00 p.m., live on Teledeporte) the first of its two games this Penultimate window of the qualifying phase for the 2023 World Cup. A game that means one more step towards the pass, which if it is already reasonably on track, can be clearer for the National Team if possible.

In the absence of the last four games – the two this month and the other two next February – Spain is leader of the group with the same balance as Italy. With Ukraine (1-5) and the Netherlands (0-6) off the hook in the standings, the three places are at stake right now, basically Spain (5-1), Italy (5-1), Iceland (4-2) and Georgia (3-3). Icelanders and Georgians also face each other this Friday in Reykjavik. A victory for Spain in Pesaro combined with a defeat for Georgia would put Spain a little closer to the goal; but in the event of victory for Georgia, especially if Italy also wins, the final pass will have to wait for the following days, to start, as far as Spain is concerned, next Monday in Huelva against the Netherlands.

In their balance with Georgia, with a victory for each, the National Team has an average of +22. With Italy he must still play both, the first this Friday, and the second in February. Iceland, meanwhile, was beaten by +30 (87-57) last August in Pamplona.

Two months ago, at the Eurobasket in which Spain won the gold medal, Italy finished in 8th position after losing to France in extra time in the quarterfinal match. In the round of 16, the team led by Gianmarco Pozzecco surprisingly eliminated Serbia.

THIS IS THE GROUP

Although the history of clashes between Spain and Italy is extensive since their first duel in 1950, recent precedents are rather scarce: only 5 so far this century, all of them in official competition, with a tight balance favorable to Spain (3 -two). The first of the duels dates back to the 2003 Eurobasket semifinal, decided in the last seconds.

The two Spanish defeats were in Eurobasket, but neither of them separated Spain from the podium (bronze in 2013 and gold in 2015). The last head-to-head dates from the second phase of the 2019 World Cup, which ended with a Spanish victory.

As a curiosity, in these only 5 games against Italy, the National Team has played them with four different coaches: Moncho López, Mario Pesquera, Juan Antonio Orenga and Sergio Scariolo (the last two).