Benzema, it’s going into clash on the L’Equipe channel 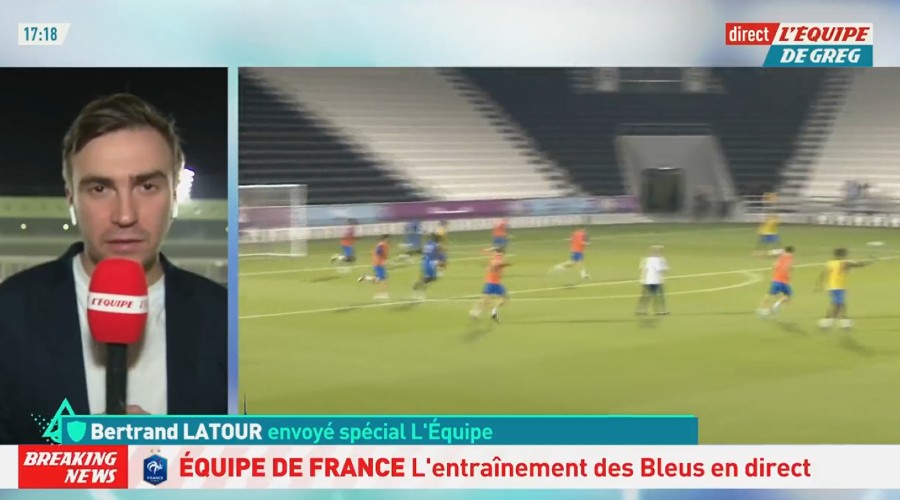 A debate on the physical condition of Karim Benzema led Bertrand Latour to raise his voice on the set of the L’Equipe channel.

Karim Benzema will he start for the debut of the Blues in the World Cup, next Tuesday against Australia? There’s always room for doubt as the Real Madrid striker slowly recovers from his thigh injury. This Thursday, he touched the ball, but was content with individual exercisesin the company of the other convalescent from the France team, Raphaël Varane.

So, will Benzema play? On the set of the L’Equipe channel, the speakers disagreed this Thursday at the end of the afternoon. While Ludovic Obraniak and Dominique Grimault believed that the last word would probably go to Benzema himself, due to the privilege linked to his status, Bertrand Latour disagreed. But then ” no way. »

“You still have to be serious for 30 seconds”

“No, but here we are not on an inter-company tournament, railed the journalist, special correspondent in Doha for the competition. Karim Benzema, he does not do what he wants, à la carte. It’s a first World Cup game. If Benzema only participated in one collective session, or barely two, to start a World Cup match, I’m not sure it happened that way. And I’m not sure that Benzema would ask to start a meeting if three days before he is unable to train with the rest of the group. That he can come into play, OK. But what are we talking about? We are talking about a player who since November has only played 28 minutes. You still have to be serious for 30 seconds. »

“And it’s the same for Raphaël Varane, added Bertrand Latour. I don’t think it happens in those terms. That there is discussion and dialogue, that there is a different listening for players who are over 30 and who have won 4 or 5 Champions Leagues, compared to a player who is new to the team from France like Marcus Thuram or Randal Kolo Muani, it’s obvious. However, they do not do what they want. And fortunately moreover that there is a medical staff and physical trainers, who have data. If Benzema is not there on Sunday (in collective training, editor’s note), obviously he will not play against Australia. »

Premiere of “And now?” by René Pollesch in Berlin