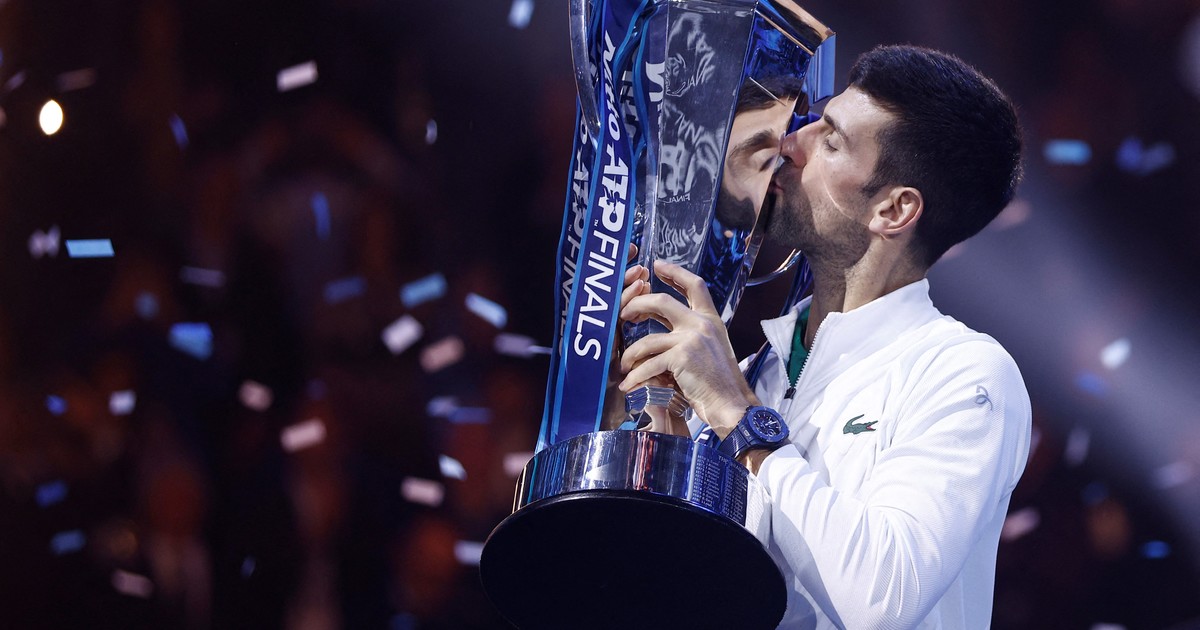 I couldn’t ask for a better end to the season Novak Djokovic. The Serbian lowered, with a huge celebration, the curtain on a 2022 that was too strange for him, marked by controversy outside the fields due to his refusal to vaccinate against the virus. coronaviruswhich left him out of several important appointments -among them, the australian open and the US Open– and relegated him to the eighth step of the ranking. A great celebration that had a reason for being: because the 7-5, 6-3 victory against the Norwegian Casper Ruud in the decisive duel of the Turin ATP Finals it allowed him to lift his sixth “Masters” trophy and to write, once again, his name in the big book of tennis.

It is that with this consecration, the former number one equaled the record of Roger Federer as the maximum historical winner of the final season contest, leaving behind the mark of the American Pete Sampras and the czech Ivan Lendlwho were second, with five crowns each.

The Serbian came out to press from the beginning and, after having comfortably won the first game, he had two chances to steal his rival’s serve in the next game, when the score was 15-40. But an unforced error of his own and a couple of good interventions from the Norwegian, who reacted well when he was against a rock and a hard place, prevented him.

With some problems getting the first serve – in the first four games, barely 50 per center was good – Ruud bet on moving the former number one all over the court and making him run to wear him down.

In the fourth game, that strategy paid off: she held serve to love and even made Nole slow down for a few seconds to grab her left leg and catch her breath, after a quick run to the net to return a volley.

Still, that gesture by Djokovic was not because of pain or discomfort. He made it clear in his next service game: physically whole, he hit two winners and also kept his game to love, to go ahead 3-2 in the set.

In a dynamic match, without too much rallying or long points, Absent It seemed to be a bit more on court. The statistics supported it, which showed that he was playing safer with the first serve and was more aggressive and finer with his shots. But Ruud responded well in uncomfortable situations -like in the eighth game, when he raised a new break point against- and maintained parity in the opening quarter, which was 4-4 after the eighth game.

And when it seemed that the set was heading to a tie break, Djokovic got the first break of the match, in the 12th game, and took possession of the set.

With the boost from that partial victory, Djokovic came out to play the second most aggressive chapter and with renewed energy. And he managed to get ahead much faster than in the previous one. In the fourth game, the Serb was very confident with the return, took the initiative on points and stole Ruud’s serve and then confirmed the break to go up 4-1.

More comfortable than ever on the court, Nole took care of the difference in the following games -Ruud had no chance to recover the break- and reached the ninth game 5-3 up, with the chance to seal the victory with his serve.

The Norwegian did not surrender and made him work in that final game. The match point for Absent it came after a point where the Scandinavian returned everything, moved all over the court and came close to stealing a break point. But the delivery did not reach Ruud and Djokovic ended up signing the victory with an ace.

Absent He celebrated with his fists clenched and his eyes raised to heaven and then with his family, who accompanied him this week. The first hug was with his son Stefan, who was waiting for him at the side of the field with a huge smile on his face. And the following, with his wife Jelena And your daughter Tara.

The Serbian’s joy was great. But the celebration also had some relief, after a very difficult 2022 for him. It is that his refusal to get vaccinated made him miss two Grand Slams -Australia and New York- and also four Masters 1000 (Indian Wells, Miami, Montreal y Cincinnati). The bleeding of points due to the absences of those appointments was added to the one he suffered after Wimbledon, due to the decision of the ATP to strip the British tournament of the units that it usually distributes. So Nole saw how much of his harvest disappeared and ended up resigning number one. The coronation in Turin could be the first step to leave behind that bitter taste.

The title also allowed him to mark some “milestones” in his extraordinary career. Djokovic became the oldest champion of the tournament. At 35 years old, improved the mark that was also held by Federerwho had been the first to win it with more than 30 years, in London in 2011, months after reaching three decades.

the serbian was crowned undefeated champion. In the round robin, he exhibited superiority to outpoint the Greek Stefanos Tsitsipas and the russians Daniil Medvedev y Andre Rublev. In the semis, he went down to the revelation of the tournament, the American Taylor Fritz, in a tough battle. And this Sunday he defeated Ruud in his eighth final, who was looking for the most important trophy of his career and had the chance to displace Nadal from number two in the world (he will appear third this Monday).

With this campaign, Nole -who had become the first tennis player to exceed 160 million dollars in earnings from his performances in tournaments a few days ago- he took $4,740,300, the highest prize in tennis history.

“This year has been very hard for me, my team has always supported me and this trophy also belongs to them”, commented the new champion. And he added: “I was nervous, but I’m very grateful that I was able to get the match out. I had a great ace to close it out. It had been seven years since the last time he had won this title. At the same time, the fact of having waited seven years makes this victory even sweeter and bigger“.