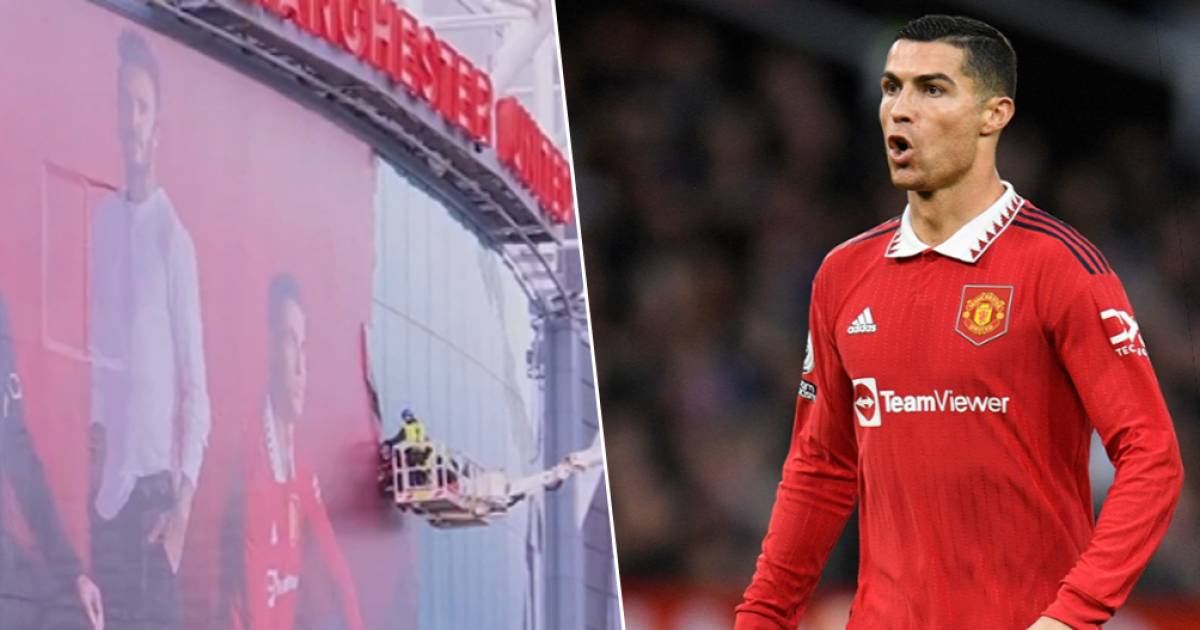 Foreign footballToday a giant poster of Cristiano Ronaldo was removed from the outside of Old Trafford. That just days after the 37-year-old Portuguese gave a scathing interview with Piers Morgan. Possibly a clear signal, but some English media reports that the bill was always intended to make way for the Rugby League World Cup.

When Ronaldo returns from the World Cup in Qatar, he no longer has to count on playing time at Manchester United. Coach Erik ten Hag has indicated that he no longer needs to see him at the club. Manchester United has imposed a fine of 1 million euros on the 37-year-old Portuguese. Images circulated on social media today showing a giant poster of Ronaldo being removed from the outer walls of Old Trafford. A clear signal from the club? Possible. Although English media report that it was always the intention to remove the poster today and replace it with advertising for the final of the Rugby League World Cup – next weekend.

Ronaldo gave a sensational interview with Piers Morgan, in which he lashed out at Erik ten Hag. “I don’t respect him because he doesn’t respect me either,” said Ronaldo, who feels unappreciated by the club. “It feels like the club wants to get rid of me. Not only the coach, but also the other two or three men of power within the club. People need to know the truth. Yes, I feel betrayed and abandoned.”

Those statements also seem to have an effect on the Portuguese national team, with which Ronaldo starts his fifth World Cup. The welcome from Bruno Fernandes, teammate at Man United, was very distant and a frustrated João Cancelo was also clearly not waiting for his captain. Raphael Varane – also a teammate at United – also thinks Ronaldo’s controversial comments have an impact. “Of course it affects us. We will follow what happens,” the French international told Europe1. “We are trying our way to calm down the situation, we are trying not to get too involved.”

LOOK. Ronaldo receives a cold reception from Fernandes after the interview

“What is happening with regard to the big clubs is gaining momentum in the media. Especially when it comes to a star like Ronaldo, so we try to build some distance. By that I mean that we are not trying to change the situation ourselves, but we are part of a collective,” says Varane

The full interview with Ronaldo will be broadcast tonight on TalkTV, but fragments have already come out. United said it would wait to respond to the negative comments until “all the facts are established.”

“It hurt that they doubted my words”: Ronaldo shares in controversial interview that United did not believe his daughter was ill

The Calimero in Cristiano: how Ronaldo with bruised ego makes himself impossible at Man United (+)