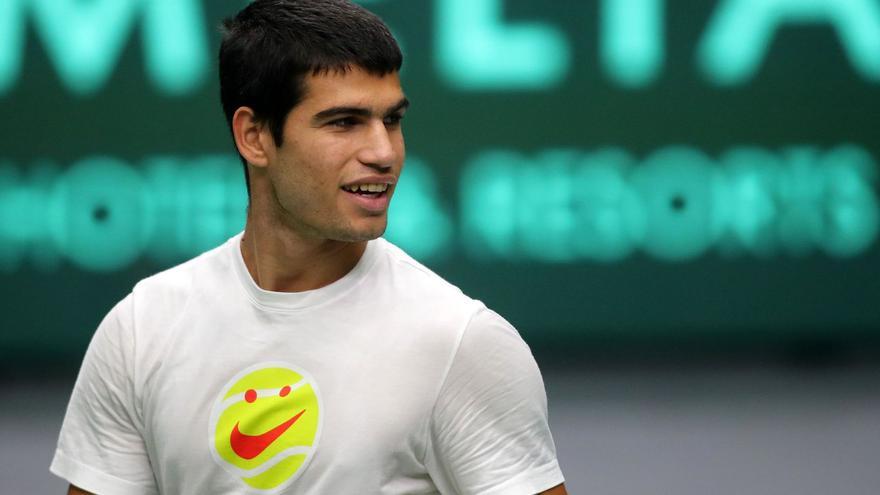 Carlos Alcaraz will be in charge of the Spanish team today against Canada with the aim of ensuring qualification for the Davis Cup Finals, a world tennis competition, which will be held between November 22 and 27 in Malaga. Despite the tremendous effort made in Flushing Meadows, the 19-year-old from Murcia has made every effort to help the National Team in search of the legendary ‘Salad Bowl’ title.

‘Carlitos’ hits the ball with his backhand. Juan Carlos Ferrero, Murcia’s coach, was very aware of his evolution.

Yesterday morning, ‘Carlitos’ returned to training on the central court of La Fonteta. He did it for an hour and a half and his feelings in training, along with Pedro Martínez Portero from Valencia, were positive. Consequently, both the Spanish captain, Sergi Bruguera, and his team, led by Juan Carlos Ferrero, assessed that he was ready to return to action after the success at the US Open, where he lifted his first Grand Slam on Sunday by winning the final to the Norwegian Casper Ruud.

In principle, Pedro Martínez (below), a tennis player from Alzira, will play again today together with Marcel Granollers in the doubles.

If the Canadian captain, Frank Dancevic, does not change his plans and the logical order of matches up to an hour before the start of the tie, Alcaraz will face Félix Auger-Aliassime. This would be the clash between the players with the highest ranking that have met in Valencia in the Davis Group B dispute. With Carlos Alcaraz as the new number since Monday, it will also be the most attractive game that can be seen in the entire group stage, divided into four venues. Aliassime, trained by Toni Nadal, ranks thirteenth in the world.

Only two top 10 are contesting the current group stage. In addition to Alcaraz, the British Cameron Norrie (8th). And, only, eight top 20. Between positions 11 and 20, Jannik Sinner (11th), Taylor Fritz (12th), Matteo Berrettini (15th), Marin Cilic (16th) and Diego Schwartzman (17th), in addition to Auger-Aliassime . Like Alcaraz, Sinner and Cilic did not perform on the first day as a result of the overexertion made in New York. And others like Frances Tiafoe or Rafa Nadal declined the invitation of the captains of their respective countries. All a sample of the will that ‘Carlitos’ has put in not missing the appointment with Davis.

The only precedent between Alcaraz and Aliassime was at the US Open 2021. Then, the Spaniard had to withdraw due to a muscle injury (6-3 and 3-1). In excellent form months ago, Canada’s number one is not at his best today and the slowness of the track in this Davis group stage works against him. On Tuesday, the 22-year-old Canadian fell in straight sets to South Korean Kwon (7-6, 6-3).

Roberto Bautista Agut, bulwark of the team in the victory over Serbia with the achievement of the second point, in principle, will face Vasek Pospisil in the first match of a day that will start at 4:00 p.m. (#Vamos de Movistar + ). Next, except for a physical setback in today’s training session, Alcaraz will face Aliassime. Marcel Granollers and Pedro Martínez would play the doubles match. The Valencian tennis player trained yesterday Thursday between 11:30 and 12:30 next to ‘Carlitos’, and under the gaze of Bruguera and the coaching staff of both players. Later, Roberto Bautista, Albert Ramos and Marcel Granollers did it on court 2.

Spain left the classification for the Finals in Malaga on track after its resounding victory against Serbia by 3-0, since in each group the first two go through. A win against the Canadians would settle the pass and make Sunday’s matchup with South Korea a mere formality.

Serie A – After 12 years of presidency, Andrea Agnelli resigns from Juventus

Red, where you vacation and recovery