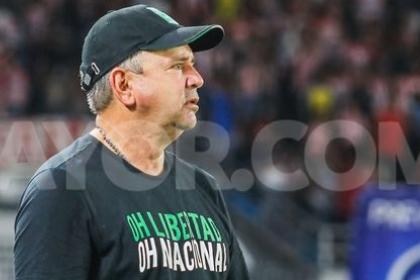 Atlético Nacional tied 2-2 with Deportes Tolima in Ibagué, for the fourth date in League II-2022. At the end of the match, coach Hernán Darío Herrera spoke about the process of the match.

“You have to assess the performance of the team today. Nacional played a great first half and showed a lot of class. In the second half, Tolima’s first 15 minutes were important, then we took control. In the end, a group error cost us the tie I am going calmly because of the functioning of the team”, commented Herrera.

In addition, the strategist remarked that “you don’t have to kill the players for that, but you have to value what they did well today. Tying Tolima and scoring 2 goals here is very complicated, but today Nacional showed what we are and for that we are champions. Nacional for the people was dead but no, it is not dead”.

The coach pointed out that “we hadn’t done any work, after the title, the work sessions weren’t good. This last game we had a week and the team recovered a little bit of its identity, and today it showed it with category”.

Regarding Aldair Quintana’s performance, the coach explained that “I’m happy with Aldair, we always trust him. If he is and stayed, it is because he has all the conditions to cover. I hope he continues at a very good level. Today he showed it and we hope from now on to watch the dispute in that position with Mier. Mier has given up and Aldair enters the competition. I’m very happy for him and we hope it continues like this.”

Finally, Herrera spoke about Dorlan Pabón’s role as a winger and changing sides with Daniel Mantilla. “Dorlan has been doing that job for a long time. He passes the line of the ball very well, when we have to do the two lines of four he does it very well. What happens is that sometimes we get tired, and we have to look at other options” .