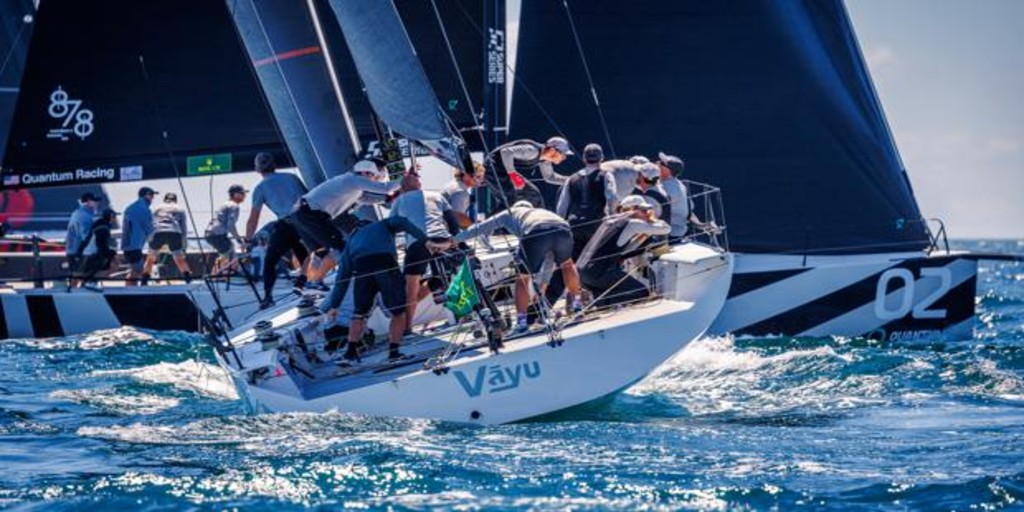 Vayú never ceases to amaze at the Rolex TP52 World Championship Cascais 2022. The rookie boat in experience and the oldest in material has climbed to second place overall, just two points behind the leader Quantum Racing after finishing fourth and second today in the two disputed sleeves. Today’s two wins were shared between Tony Norris’s Phoenix and, again, Andrés Soriano’s Alegre, thus achieving his third partial victory in the six races played.

And that Vayú went out to the regatta field today without two of his regular sailors due to indispositions. But the Whitcraft family sailboat is no longer a surprise, but a reality.

Today he showed again that this is a very open class and that if you navigate well, choosing the right side and making good starts, anything can happen. He finished the day with six points, the same as the disconcerting Alegre who matches wins and disappointing results. Andrés Soriano’s men have won three of the six races, which are championship numbers, but their other results, one eighth, one ninth and one fifth, separate them from being in the noble zone of the Rolex TP52 World Championship that has been held since Naval Club of Cascais.

Once again, the light wind kept the fleet waiting, which could not compete in the first round until 2:50 p.m. when it was scheduled to start at 1:00 p.m. And he did it again with a light wind of eight knots from the northwest.

The best start was made by Tony Norris’s Phoenix for the pin. The wind was much more reliable on that side and taking the pin he was able to decide when to turn and dominate the task. Next to him were the Provezza and the Platoon. Quantum Racing went back to the center of the fleet minimizing the risks, that is their strategy.

Phoenix had been solid the first two days, but without getting good results since he had to always recover as in the two motos in which he made an off-line. Today in the first heat of the day he tacked on it and achieved an incontestable victory supported by a reborn Provezza with John Cutler at the helm. Third finished, of course, Quantum Racing and fourth was made by the not so surprising Vayú.

The second manga was something different. At the start, the boats that had decided to go on the committee side, the closest to the Mouth of Hell, dominated. And there were the Alegre, the Vayú and the Sled. Those who started closest to the viewfinder suffered the decision, as was the case with the Phoenix and the Platoon. Upstairs they arrived very evenly, but the compromise allowed Alegre to pass the windward buoy first. Immediately after, Takashi Okura’s Sled did it.

As soon as the commitment from above was overcome, Alegre gybed towards land, leaving the right side of the open sea for the Sled, which in the stern was fighting side by side with the Englishmen led by Andrés Soriano to mount the leeward gate in the first place. And they did it with a two-length advantage over Alegre. Although Soriano seemed comfortable defending the dirt side in the heat and at the gate he took the one on the right and on the second beat he regained the lead of the heat that he did not leave until the end. Sled left second place in the hands of the impressive Vayú.

Ñeti Cuervas-Mon, Vayú grinder, explains: “I think we are still outside of our theoretical site. These light wind conditions help us a lot because they leave doors open and tactician Nick Rogers is to be congratulated for nailing it. It is true that we are well and regularly reading the race course very well and trying to make it as easy as possible thanks to good decisions. The team is very lively and happy, but with their feet on the ground. We are going to enjoy the moment and see if we can make a splash”.

John Mark, bow of the Phoenix, manifests: “The first regatta was very good, we won it with a good start and then sailing very well. In the second it was harder with a good start, but we stayed in the middle of the fleet and a penalty with Provezza left us with the wrong foot. In the end we almost made up a couple of places, but we couldn’t beat Provezza and Quantum by a second. There are four sleeves left and anything can happen. We work to be on the podium on Saturday”.