the video with the goals of Enzo Fernández, Romero and Álvarez 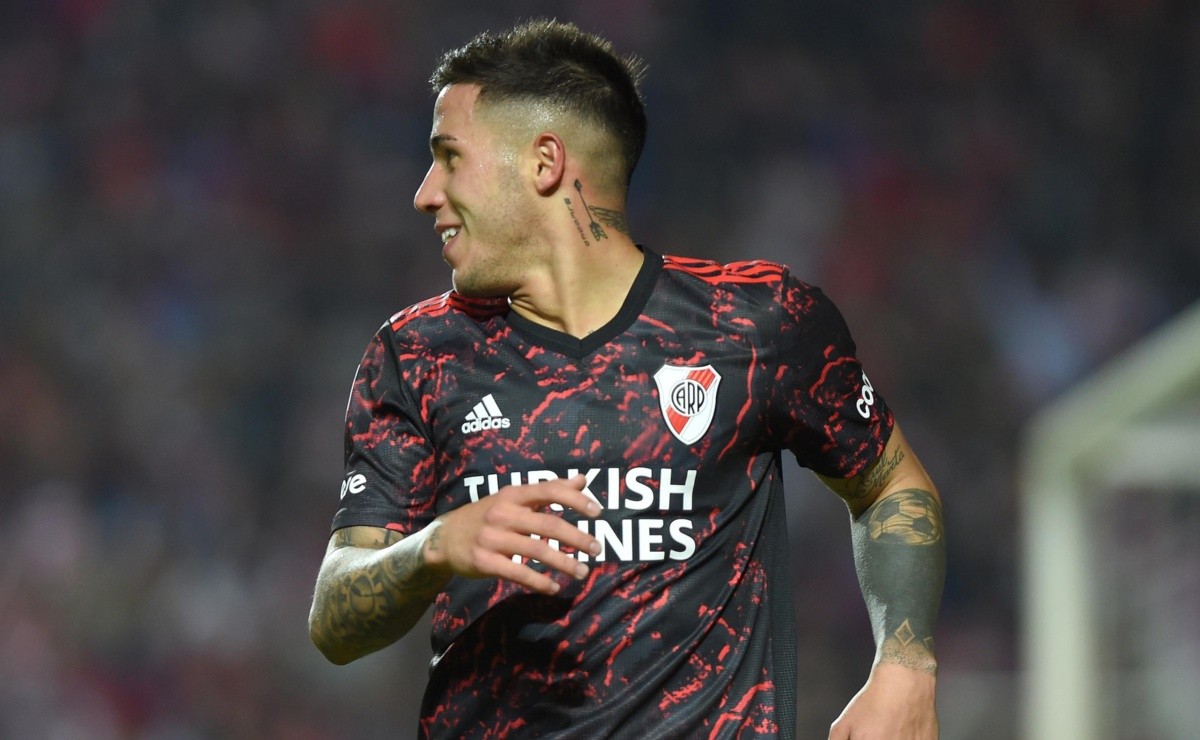 River presented a change of scheme in Santa Fe: 4-1-3-2, with Enzo Pérez on five, ahead Enzo Fernández, Paradela and De la Cruz on his sides and Braian with Julián on the points, something that the fans had been demanding for a long time. The start of the match was quite intense.. Union with the clear position of pressing in the rival field and not letting River breathewhile the Millionaire tried to get on his feet to accommodate himself in the match, with a very shifty Álvarez.

At 16′, the Millionaire commanded a counterattack in a great way and went up on the scoreboard. Romero dropped a difficult ball in the middle of the court, Álvarez faced in speed, hooked and took some more time to filter for Romero himself, who defined soft before Mele’s departure to score River’s first goal in the championship and get the scoff.

From the goal, River began to impose conditions on the game, with an Álvarez unleashed and constantly pivoting and having a lot of influence in the generation of attacks. But Unión was not far behind and at 25′ he almost equalized with a shot from Machuca (a slip by Elías Gómez made him free) that Armani covered with a great reaction and later a header from Peralta Bauer that hit the crossbar.

For the last stretch of the first half, the procedure was even and it also became quite hot, because the referee Echavarría began to make mistakes in some mistakes that generated a lot of disagreement in River. The Millionaire no longer attacked with such enthusiasm but he was in charge of preventing the Tatengue from growing with the ball.

The start of the second half and again it became intense with the passing of the minutes. Unión dominating the ball and River more focused on containing it and playing counterattack with Paradela or Romero shooting at speed. At 15′, Millo managed to be effective in a goat game and went 2-0, with a wonderful assist from Álvarez for Enzo Fernández to control and puncture goalkeeper Mele.

Despite winning, the Greatest could not avoid suffering, because Herrera’s back (from a weak match) was the main path chosen by Unión to hurt with dangerous overflows from Zenon and crosses into the area. Armani responded tremendously at 24′ to drown out Luna Diale’s cry after a play that originated behind River’s right back.

And all the goals missed in the first three dates were accumulated and materialized in this match. In another good moment of Union, River hurt again and settled the game. Like almost never in the year, he was effective and hit when he had to. Filtered ball by Enzo Fernández that, helped by a deflection, was left to Julián who calmly defined before Mele’s bailout to make it 3-0. Another consecration night for the Spider, who was three goals away from equaling Borré as the top scorer of the Gallardo era.

Despite the match being sentencedUnión put him in suspense because he discounted at 33 minutes. Center from the right by Cañete and lethal header by Peralta Bauer, who got between Martínez and González Pirez and overcame Armani’s resistance to make it 1-3. With the match defined, el Millo did not let go of the accelerator and scored the fourth almost in stoppage time: another great assist from Álvarez for Palavecinowho appeared on the left and defined, with a touch from a rival defender, to score the fourth.

read more  Transfers: Mohamed Salah believes he is not asking for anything "extraordinary" from Liverpool for a new contract

In case the strawberry was missing from the dessert, Julián placed fifth at 50 minutes. Surgical ball from Juanfer with the external face for the Spider who defined again with great category and serenity to make it 5-1.

Today River was a direct team, forceful and committed to the cause. It was necessary to add three and he did not display his high-flying and colorful football, but instead brought out his voracity when stepping on the area. El Millo attacked five times and made him get Union out of the way in the five

It wasn’t a steamroller but it rounded out a great performance that I needed almost like water. With this result, River added its first three points in the tournament and also scored its first goals in the semester. It had Julián Álvarez and González Pirez as high points and the best news was Braian Romero’s return to the networks after several months. Now, to think about Lanús, knowing that the expected reaction appeared in Santa Fe.