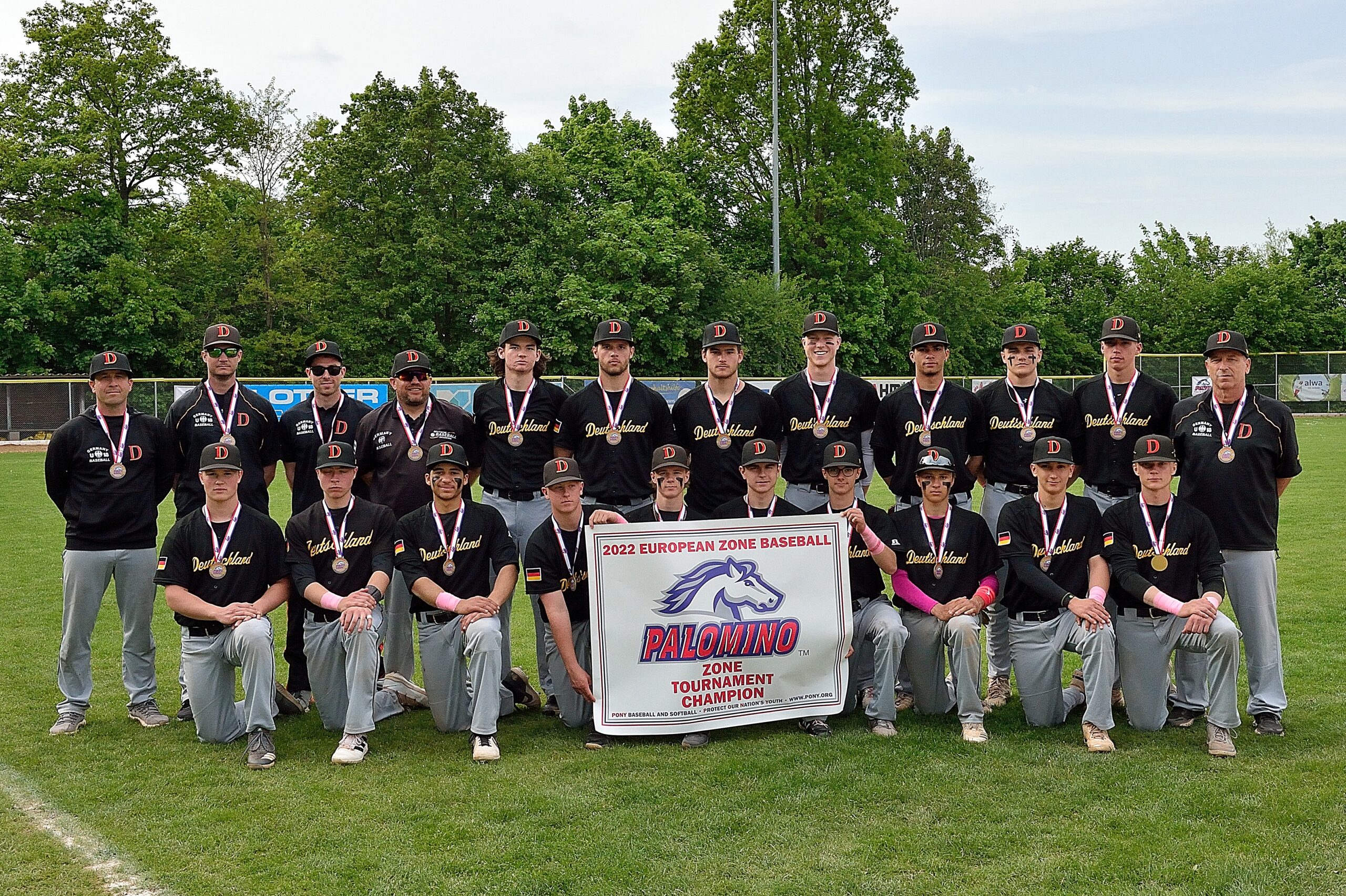 From Wednesday, August 4th, 2022 to Sunday, August 8th, 2022, the qualification tournament of the PALOMINO class took place in Stuttgart. The American but globally active sports association PONY (Protect Our Nation’s Youth) names all of its age groups after the stages of development of horses. After COLT (eligible to play from * September 1st, 2005), the DBA was also able to win Palomino with the juniors (eligible to play from * September 1st, 2002), whereby we only used players who are eligible to play for the European Junior Championships in 2022 – i.e. this year ( from *01.01.2004)

Since the DBV was unable to finance this junior measure, the German Baseball Academy stepped in, and so after the Winterball U 18 Camp and the March Tour, this international tournament in Stuttgart was the third for the German juniors in the EM year 2022 action of this year.

In Stuttgart it was about working on the 6th tool, repeating processes, philosophies, approaches and also for the national coach to see who should be used where best at the European Championships in the Czech Republic in the summer. With the exception of Tristan Russell (Texas), Luca Dickinson (San Francisco), Fabian Aquino (DR, Cabarete) and Noah Lindt (Bonn – exams and Bundesliga assignment), almost all of the candidates were actually there. Captain Yannic Walther, for example, caught on Wednesday evening, then drove back to Heidenheim to study for his last Abitur exam on Friday, wrote it and was back in action in Stuttgart in the evening as a DH. On Saturday he and center fielder Luca Hörger played in the Bundesliga again, Tim-Luca Lindemann pitched in Neuchâtel, but all three were back on Sunday.

These were insightful days for the coaching staff.

The first game on Wednesday evening under floodlights against the astonishingly and gratifyingly strong Stuttgart Reds was able to 10 – 4 be won. The 19-year-old Venezuelan with a Spanish passport – Jose Pimentel – threw for Stuttgart, who also plays successfully for the Reds week after week in the Bundesliga. The German boys took up this challenge energetically and convincingly and were able to score a total of 7 runs in 3 innings with 6 hits. This is not how Jose is attacked in the Bundesliga, some spectators thought. Tim Fischer from Regensburg started as a pitcher, followed by Mathias Vogl and Tim Luca Lindemann.

The second game was against the Croatian national team, who surprisingly won relatively easily against the Dutch Future Stars in their opening game. Also against us at least two thirds of the Croatians showed that they can hit pretty well, that they can play baseball appealingly. The Croatian manager brought a starter who threw very slowly but was still able to pitch: Different deliveries, curveballs, sliders…the whole deal. Our boys struggled to adapt, the Croatian field defense made every play. It was an exciting game. It was not for nothing that the German men had to admit defeat to the Croatians at the last European Championship. In the end, however, class and routine prevailed and the game could clearly keep up in the end 11 – 1 be won. Mo Van Bergen (Stuttgart) and Joshua “Der Germane” Harrison (Hünstetten) stood out as pitchers.

It was a lot tighter against the Future Stars from the Netherlands. The Dutch were able to muster two strong pitchers, which was great for the cause. We were in Stuttgart to grow together as a team, to get as many at-bats as possible, to try out our pitching rotation… and that’s actually only meaningful when there’s competition. That was definitely the case in this game, 7-3 we were able to prevail in the end. Bjarne Reinhardt from Paderborn threw a very strong 5 innings, had everything under control, then Mathias Vogl (Regensburg) struggled a bit with his control, like on Wednesday evening. Pitcher Tobias Maul from Paderborn came in to help with Null Aus and Bases Loaded and ended the inning with 3 strike outs

On Saturday, the second travel team from the Netherlands, Netherlands United, was waiting in the semi-finals, although they did The Netherlands was written on the chest, this team should not be confused with the Dutch national team. At the 0 – 15 they didn’t really stand a chance.

In the final we then met the Lithuanian national team, whose coach Virmidas Neverauskas I’ve met at tournaments for decades, who loves and lives baseball and against whom I’ve played before. His son Dovidas Neverauskas, so far the only major league player from Lithuania, was there for the first few days of the tournament before he went back to the Bonn Capitals, for whom he is playing this year.

The Lithuanians, favored by many walks, wild pitches, etc., had won against the Stuttgart Reds in Xtra-Innings with two outs and 8-11 deficit the night before and had no cuts in this final against the German starting pitcher Mo Van Bergen. Most of the German defensive innings were little more than 10 pitches long, on the offensive it took a little time to adjust to the speed, but then the boys let it rip. 10-0 after five innings.

Since we a) as DBA have not planned a budget for the Palomino junior class, we b) are already flying to the Palomino World Series with the COLT U 16 boys to the COLT World Series at the same time and the Strausberg summer camps are also taking place and we c) the juniors prefer to gather as planned in Regensburg to prepare for the European Championships, we informed the organizers on the first day of the game that we would unfortunately not want to exercise the right to participate in the World Series if we won the tournament. Now Lithuania flies.

In contrast to everyone else, we played with wood, trained as usual with vitillas, corn, peas and heavy balls and were very accommodating on the shot. Bjarne Reinhardt and Darrion Richards (both Paderborn), like Luca Hörger (Heidenheim), each hit a home run. These three, as well as Yannic Walther (Heidenheim), Nik Rossius (Mainz), Joshua Harrison (Hünstetten) also stood out a bit offensively from an overall strong team.

A few words about the tournament and the organizers: The Stuttgart Reds around tournament director Andre Fink, who always had everything under control in a friendly, reliable and competent manner, presented themselves as a well-oiled organization machine, as a club with many hands helping out. Bundesliga players like the Weber brothers Yannis and Danilo, Andrija Tomic, Marco Cardoso, Yannick Witt, the tireless and omnipresent ex-DBA European champion Jonas Van Bergen and a few others took care of the maintenance and preparation of the course, the scorer, the catering crew, the grill masters …..everything went very convincingly, many hands helped. 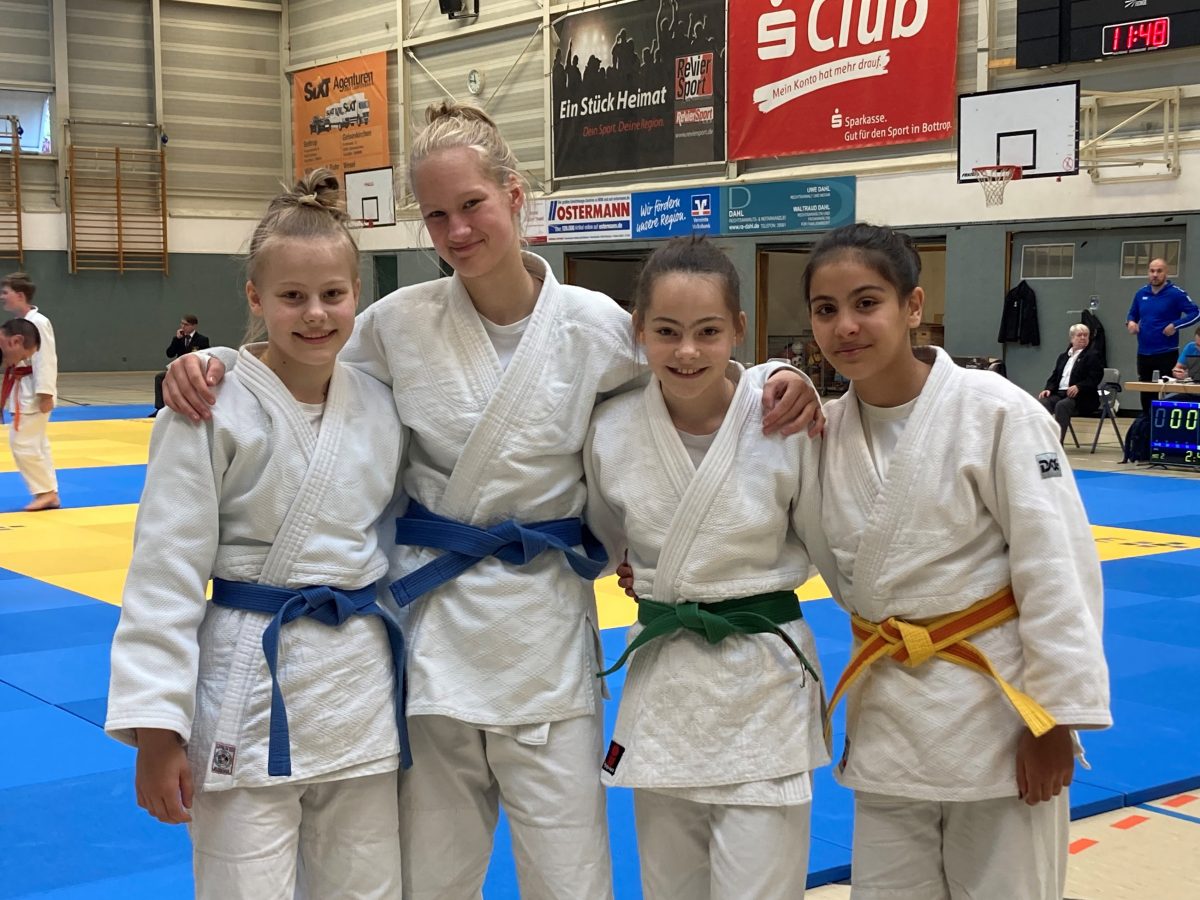