Olympic Games: Mikel Oyarzabal, Mikel Merino and Martín Zubimendi debut with the Olympian with a draw 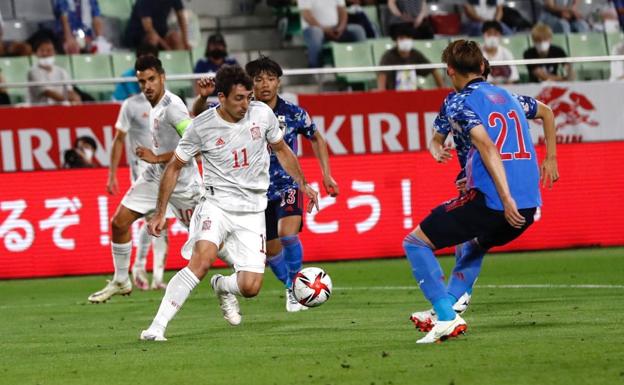 The captain of the Real was a substitute, entered to play in the second half and was about to score

Mikel Oyarzabal, Mikel Merino, and Martín Zubimendi made their debut this afternoon with the Spanish Olympic team. The meeting of the state team against Japan U23 has concluded 1-1. The three representatives of the Royal Society have had their share of prominence in a meeting that serves Spain in preparation for its official premiere at the Olympic Games, which will take place this Thursday. Merino and Zubimendi have been starters in the center of the field, forming a couple in the engine room, while Oyarzabal has had to wait for the second half to take the field.

The ’10’ txuri-urdin has been very active and has been very close to scoring, but his left-handed shot crashed into the side of the net. For their part, Zubimendi and Merino had a few good minutes at the Kobe stadium, despite the fact that the heat has reduced Luis de la Fuente’s players. Merino also tried to overtake Spain with a shot from the half moon, but failed to score.

Those of Luis de la Fuente were forced to react after the goal of the Japanese team, the work of Doan, and where, with the help of Pedri, they managed to neutralize it with a lucky goal from Soler and improve their image. In its first and only test before its debut in the Olympic event, Spain accumulated good and not so good feelings. The captain was Dani Ceballos, and there were also minutes for Pedri, Cucurella or Puado.

EdF: Fekir has every intention of coming back