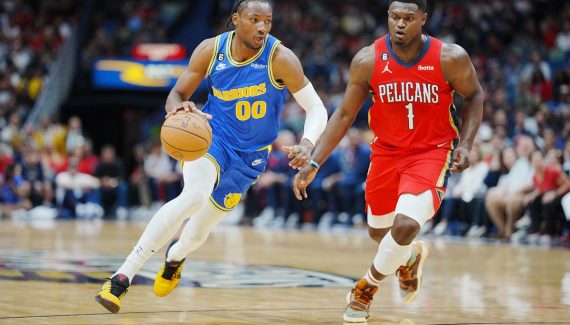 After the loss to Orlando, Steve Kerr announced changes and adjustments. Therefore, it is difficult for the Golden State coach to do better than to start the meeting in New Orleans without four starters!

Stephen Curry, Klay Thompson, Andrew Wiggins and Draymond Green absent, the other Warriors had a unique chance to shine. “To show the staff that they deserve to be on the floor”said the coach.

One player particularly took advantage of this opportunity: Jonathan Kuminga. The young winger had been left out of the rotation since the start of the season, including several games where he remained blocked on the bench, and only 21 minutes in total (in two games) in the last five matches played by the defending champions.

Steve Kerr offered him 38 minutes against Zion Williamson and company and the Congolese did not miss this meeting. He scored 18 points at 7/12 on the shoot, obviously making his best game of the season. Because in six matches played before, he had only compiled 16 points in total…

“We saw who played well in this match. Kuminga has been very good,” notes Steve Kerr for ESPN. “He gained minutes. He’s shown he’s ready to step into the rotation and contribute. But you have to do it every night, even on nights when minutes are scarce. »

Steve Kerr had mentioned “guys who are dying to be in the field” and no doubt the 20-year-old, frustrated with his lack of playing time, was among those who were hungry. He won his first bet and will now have to confirm.

“I give it my all every day to make sure I work on my game,” he explains. “It’s not perfect, but I give everything I have on the floor. I’m tough on myself, harder than anyone. »