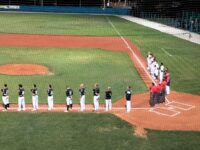 Great feat of Parma Clima that tonight broke the Serravalle field by defeating San Marino with the result of 2 to 1 and bringing the Italian Baseball Series to game seven.

The decisive match will be played tomorrow evening at 20.30 on the San Marino field.

The hosts entered the field with the same starting line-up in game five with Batista leadoff and Celli in fifth place in the line-up. After the spectacular performance in game three, the first ball of the match was once again touched to Kourtis.

News on the other hand at Parma Clima. Guido Poma was unable to recover Joseph and deployed his team with Rodriguez in third, Battioni shortstop, Talevi in ​​second and Sambucci in first with Astorri designated. Exterior line composed of Desimoni, Koutsoyanopulos and Gonzalez and battery formed by Mineo and Lugo. In the batting order Koutsoyanopulos was brought back to the first spot with Astorri in fifth and Sambucci in sixth place.

Koutsoyanopulos opened the match with a single on the second base cushion but immediately after he was caught stealing from a precise second assist from Lino: the ducal attack ended with a spectacular diving catch from Leonora.

The first round of San Marino also saw the leadoff arrive at the base: Batista received four balls and was taken to second by a sacrifice by Ferrini but Angulo (on the fly from Sambucci) and Lino (strikeout) were unable to produce the point of advantage.

Parma Clima tried again in the second inning. Four balls to Mineo, single to the left of Astorri: Sambucci performed a perfect sacrifice to which the home bench reacted with an intentional base to Rodriguez. San Marino’s tactic paid off thanks to the two consecutive strikeouts scored by Kourtis against Talevi and Battioni.

Parma Still dangerous climate – and ahead – in third place. Koutsoyanopulos made it to first base using an error from Angulo and Desimoni pushed him to third with a single in the middle after failing the sacrifice bunt twice. Gonzalez did not take advantage of the opportunity (k) but Mineo beat home the one-nil point with a sacrificial sprint to the right.

Doubling to the fourth. Rodriguez received four balls, reached the second thanks to a diamond serve by Talevi and completed the tour of the bases when Battioni placed, with two outs, a single surgery on the right field. San Marino wasted no time and replaced Kourtis with Fernando Baez who closed the second half with confidence.

On the other hand, Lugo was almost untouchable for three rounds. After the base ball to Batista in the opening he put in nine consecutive outs, scoring five strikeouts in the first three innings.

In the fourth, however, he suffered the first valid of the evening, conceding the point of 2 to 1. Ferrini received a base per ball and was pushed to third by a single from Angulo: the action continued with a successful “trap” to damage of Angulo and with the simultaneous winning race at home base of Ferrini.

The fifth round did not offer emotions as well as the first part of the sixth, easily dominated by Baez. Lugo, having exceeded the threshold of 70 pitches, started the sixth defensive round with a strikeout against Pulzetti, continued it with Batista’s flying out and concluded it with another elimination at the plate against Ferrini, the eighth of the evening.

Baez, author of a perfect relief, put in three consecutive outs even in the seventh inning and the outcome of the game passed into the arm of Marc Andrè Habeck, substitute for a Luis Lugo with 82 total pitches and only one valid conceded. In front of him the hitters three, four and five of San Marino. Angulo hit a single towards third base, Lino ran into a strikeout, Celli suffered the same fate, Ustariz kept the locals’ hopes alive with a valid right but Epifano fielded a bouncy ball that Talevi has turned into the out of victory.

Matches today Monday, for the Qatar 2022 World Cup: who is playing, schedule and TV