NFL | Jalen Hurts and the Eagles win against the Vikings 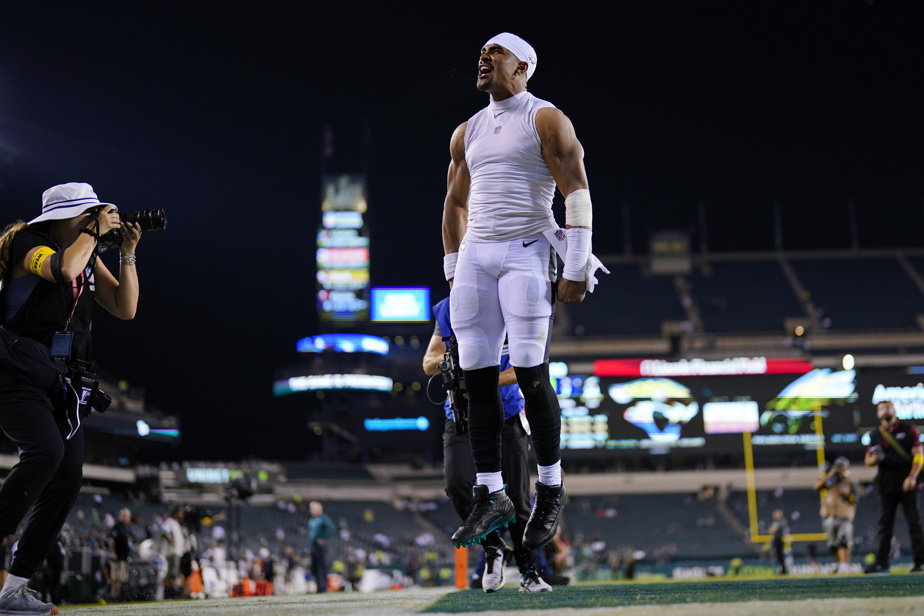 (Philadelphia) Jalen Hurts had 301 yards in the first half of the game that could set the tone for his young career.

Hurts finished the game with three touchdowns and helped the Philadelphia Eagles beat the Minnesota Vikings 24-7 on Monday.

In his second season in the NFL, Hurts is trying to establish himself as the Eagles’ starting quarterback for the next few years. Unstoppable from the first possession of the game, he gave indicators of a future cornerstone.

Hurts found takers on his first five snaps — including a 19-yard pass to AJ Brown — and finished the streak by scoring the middle finger himself with a three-yard run.

The touchdown was just the starting point for the 24-year-old quarterback who threw, ran and imposed his dominance against a Vikings defense that couldn’t neutralize him. At his 21e career start, he finished with 333 yards through the air, one touchdown pass, 57 yards rushing and two majors.

On the first play of the second quarter, Hurts spotted Quez Watkins and Watkins scored for 53 yards. The Eagles took a 14-0 lead.

The Eagles receivers shone in the duel. Brown caught five passes for 69 yards, DeVonta Smith caught seven for 80 yards and Watkins gained 69 yards, including on his touchdown.

Hurts made another highlight-worthy play with just under two minutes left in the first half. He left his pocket and ran towards the end zone. He dragged two Vikings players with him, but made his way into the end zone to score a 26-yard touchdown that sent the crowd into a frenzy.

Moments later, Jake Elliott made a 38-yard field goal and the Eagles retreated to the locker room with a 24-7 lead.

However, despite a dramatic comeback in the second week of NFL action, Cousins ​​and wide receiver Justin Jefferson were unable to breathe new life into the Vikings’ offense.