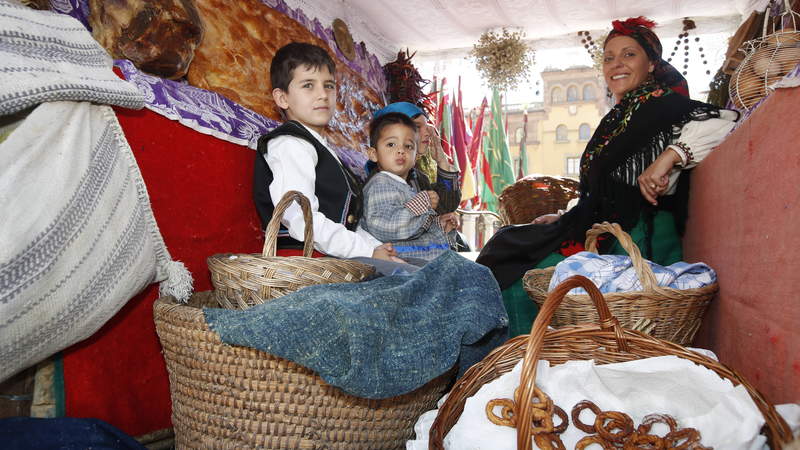 To the claim of “the people deserve it because we have already restricted ourselves enough”, the León City Council presented this week tomorrow the program of the San Froilán festivities. With a budget of 227,145 euros, well above the 120,815 of the previous year, in which there was no livestock contest, the program focuses on the event of Las Cantaderas, which will be held on Sunday, October 2 with banners and decorated cars , will maintain Come y Calle, in the San Francisco park from September 30 to October 5, and will open the Medieval Market, from 5 to 9. As a complement to these three major events, there will be festivals of traditional and modern music by groups of León, Illegales, Depedro and Shinova concerts, regional dances and sporting events of Leon bolo, Leon wrestling and others.

The commitment to maintain tradition but “focused on modernity and the future”, as explained by the Councilor for Festivities, Evelia Fernández, will feature the pottery and crafts fair. Without restrictions, the stalls will be placed in Ruiz de Salazar and Pilotos Regueral from September 30 to October 3 so that citizens can enjoy an event that already has 42 editions.

for the little ones

The little ones will have their meeting place in the Plaza de Puerta Obispo from September 30 to October 5. Children’s activities will be centralized in this area. There will be craft workshops for children to build their banner, to decorate their decorated car and make a medieval costume. In addition, they will teach you traditional games and it will be completed with local music.

In the Plaza de las Cortes.

If Puerta Obispo is reserved for the little ones, the Plaza de las Cortes Leonesa will centralize the regional dances. From September 30 to October 9, groups from León and the province will offer their performances on this stage.

Eat and Street in San Francisco

The appointment has already become common both in San Juan and in Froilán, the food vans will occupy the San Francisco park from September 30 to October 5, with ambient concerts vintage and flea market to spice up your menu.

DAY OF THE ROCKS

On October 1 in the Humid

It will be on October 1 and 1,100 people are expected to participate, as the councilor estimated. They will start from the Plaza del Grano, where the proclamation will take place and will move throughout the historic center, with Don Gutierre as another of the reference spaces.

Theatrical presentation of the delivery.

The day before Las Canteras, Saturday October 1, the prologue of the ceremony will be staged. From 10:00 a.m., the heralds will visit the four parishes of the historic center where the hundred maidens were historically collected. Until 8:00 p.m. they will tour the city, with the Sotadera as a guide. The day will end with the dramatization of the delivery of the young women who were offered to the caliph to maintain peace in the kingdom

On Sunday, October 2, the Las Cantaderas ceremony will be reissued. The corporation will depart at 11:30 a.m. from the town hall of San Marcelo to reach the cathedral, in whose cloister the debate will take place between the municipal representatives and the cathedral chapter to decide whether it is a forum or an offer for the offering of the city to the church for the end of the tribute of the hundred maidens.

With 307 ensigns to the wind

The banners will give to the wind throughout the day. In the parade there will be a record of participation: in total, there are 307 rods registered. They will leave at 11:00 a.m. from the esplanade of the Banners, they will go up Gran Vía de San Marcos, they will enter through the wide street and they will find the Cathedral’s grille as a base on which to rest. The association has demanded that next year the time be brought forward so that the act, at the end of the mass after Las Cantaderas, is at 1:00 p.m., instead of around 2:00 p.m.

Through Santa Marina to the grain.

The works of Carreras and the Los Cubos road mean that the route has to be modified. In the end, the passage through the Santa Marina neighborhood will be recovered, instead of opting for the alternative of the Puerta Obispo slope that the City Council had proposed or crossing through San Isidoro. The 40 participating adorned cars will depart from the San Pedro car park, enter through the calle de la palomera, turn into Alfonso el Justiciero, where it will run to Ronda Interior, and enter through the Arco de la Cárcel. There, they will take the same itinerary as before the pandemic: access through Arvejal and turn onto Cardenal Landázuri —instead of Pablo Flórez, which had already been removed due to redevelopment prior to covid— to focus on Plaza de Regla, where they will meet with the cars. From this point there will be no variation either: they will go down Calle Ancha, exit at Varillas, turn right at Platerías, arrive at Plaza de San Martín and, Zapaterías, Don Gutierre and Juan II through, will lead to Plaza del Grano.

From October 5 to 9 at the Romantic.

It will be placed again in Santo Martino, San Isidoro and El Cid. The proposal will have more than 230 craft and food stalls, as well as catering establishments. It maintains the medieval setting and theatrical performances to liven up the Romantic Quarter.

Next Thursday the festivities open with the XV International Celtic Festival Reinu de Llion. It will feature groups from Asturias, Scotland and Galicia. It will be held on September 29 and 30 and October 1 at 10 pm in the Plaza Mayor with free admission.

Two days, one for the women.

This edition finds in San Froilán a showcase for the best local groups on October 4 and 5. Every day there will be from 7:00 p.m., in the Plaza del Grano. The appointment on the 4th is reserved for female singers, musicians and composers with “great artists from Leon”.

It is presented as one of the novelties in San Froilán. It will take place from October 6 to 9, with concerts scheduled in the main square starting at 9:00 p.m. The program “combines traditional Leonese music with current trends such as postfolk or contemporary music,” Fernández explained. Eight groups from León, Catalonia, Andalusia and Galicia will perform.

The Palace of Exhibitions will focus this appointment. It will open with Illegales, on September 30 and will be completed with Depedro and Shinova on October 1. Tickets are sold at www.marcaentradas.com.

Leonese bowling will have two dates: on October 1 with the San Froilán trophy, at the Nocedo bowling alley, and on October 5, in San Francisco, with the frog as a complement. The fight from León will star on the day of the 5th, with the great circle of the Plaza de la Catedral. The sports program will also begin with squash, tennis, archery and the II Street Athletics Grand Prix, organized by CD Sprint Athletics León, in Ordoño II, as detailed by the responsible councilor, Vicente Canuria.