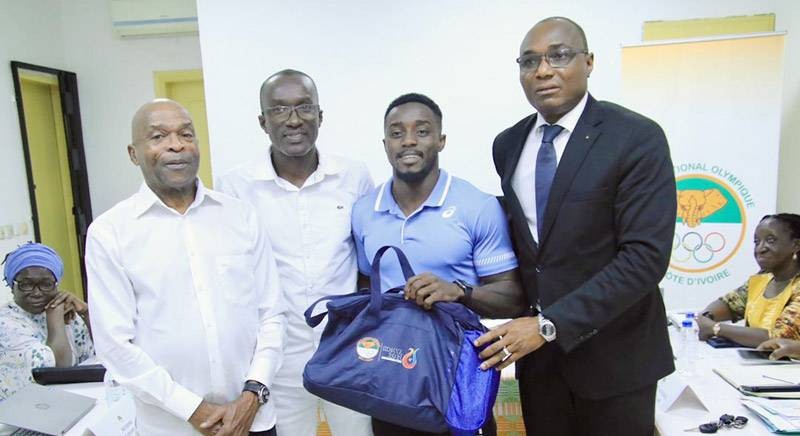 Côte d’Ivoire will participate in the fifth Islamic Solidarity Games, from August 8 to 18, in Konya, Turkey. Thanks to the diligence of the Minister of Sports, Paulin Claude Danho, the National Olympic Committee (NOC-Côte d’Ivoire) will be able to lead a team to this meeting of member nations of the Organization of Islamic Cooperation (ICC).

On Friday, President Georges N’Goan of the National Olympic Committee presented the Ivorian athletes selected for these games with a batch of sports equipment. During the ceremony held at the headquarters of the institution, in Deux-Plateaux, each Ivorian representative received a bag, shoes, T-shirts in the national colors, tracksuits, polo shirts and a national flag. A way for the successor of Lassana Palenfo to put them on a mission in favor of these Games.

The athletes, around the NOC President, promise laurels to Konya. (Ph:Dr)

“We are very proud to have initiated this ceremony because usually the athletes leave incognito and when they come back with laurels, we talk about it in the newspapers and then nothing. We decided to change that. From now on, we will receive the athletes before their departure for the multi-sport competitions, as far as the international competitions counting for the Olympic Games are concerned. A way to galvanize them and honor them, because they are the ones who are fighting on the ground,” declared President Georges N’Goan, who does not intend to stop at this first experience.

To justify his selection, the new boss of the national Olympic movement says he has counted on the disciplines capable of bringing back laurels to the country. “All of this, in the spirit of preparing our athletes for the 2023 African Games and the 2024 Olympics,” explained Me N’Goan, always pragmatic.