Lorena Ochoa and ATC Cares, Tennis and education for all in Los Cabos 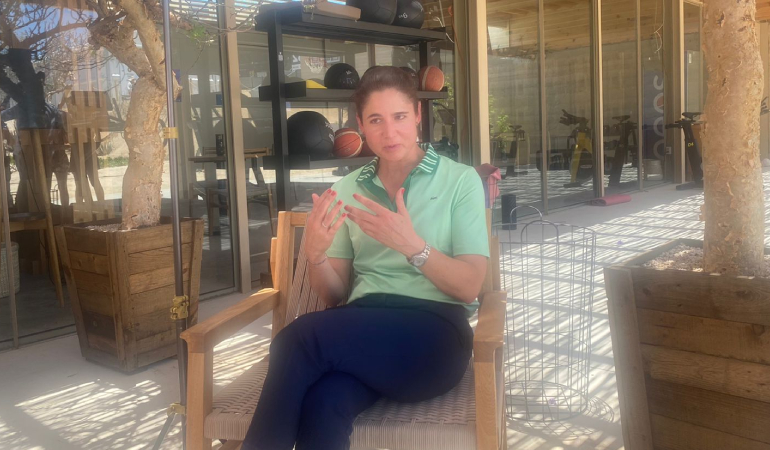 Since Lorraine Ochoa became a professional golfer, he started his foundation with the purpose of sharing with those who need it most a little of the fortune that life gave him. Behind the interest in helping others is the way he grew up, the example of his father and the firm conviction that “if you can do it, you have to do it”, that is how he related it in a talk with THISwhere he also assured that, although his La Barranca school has delivered great results, he needed to reach more people and so he decided to join the Becar Foundation

WE RECOMMEND YOU: “I hope that in the future Mexico will have what it deserves from tennis”: Santy González

After two years of being “godmother, friend and support” of scholarshipLorraine found in Mextenis the perfect alliance to reach more people, which is why they decided to approach and discuss a project to undertake an adventure that will benefit thousands of children by combining two fundamental pillars in life: sports and education.

“Life and dreams are about making alliances, meeting with those who know, with people who dare to dream. In Mextenis that happens, they have done so well because they dare to dream, what they have achieved for tennis is incredible, it is difficult for us to realize, but that will bring, in addition to many fans, great tennis players in the future”; explained the former number one in the world.

Through your program ATC Caresit is 2022 Mextenis intends to become a socially responsible company, for which they began a series of projects that include the donation of a community court in Los Cabosthe ‘Family Day’ and the alliance with Becar, in which they will donate 100 thousand pesos to the Pacific Airport Group Foundation (GAP)which will benefit hundreds of young people in the region with scholarships that will be managed by Becar.

“This foundation (scholarship) has been going on for many years and what we are going to do is join them in achieving education linked to sports,” he said. Geoffrey Fernándezdirector of Los Cabos Open.

“We will be working together with different schools in which we will be delivering licenses from the Oxford Academy,” he replied. Fernández.

The alliance between Mextenis y scholarship It was not complicated at all, since the rapprochement there was interest on both sides and they practically began to walk together.

“We work on the issue of education and when we met with them we asked them what they were doing about it and they opened their doors for us, we talked a lot with them about how many schools we have and they loved the project, so today we are one, we are working together” Lorraine said.

The scope of Becar Foundation It is national, it currently has 21 schools in nine states, which translates into almost 9 thousand supports a year. This has changed thousands of lives, for Lorraine Ochoa es invaluable.

“There are hundreds of stories, it’s something incredible when you see what these children do and what they achieve and above all the opportunity to continue impacting many more lives, that’s what motivates me,” he said.

One of the most important things for Ochoa is the comprehensive support provided in scholarshipIn addition to education, the Foundation is concerned with improving the environment of its beneficiaries.

“We already have the school here in Los Cabos which was the most important thing, we have the support in Baja California Sur and soon we will be in Guerrerobut it is all thanks to the commitment that they also have with the issue of education in the country, we are going to work with all our hearts”, he explained Lorraine.

“Becar Foundation He is 21 years old and what we know is that we have to give children education and quality, what we do must be made up of four pillars: human training, continuous training of teachers and directors, new methodologies and technologies”, he explained. a THIS the director of the foundation.

YOU MAY BE INTERESTED: Daniil Medvedev is already in the quarterfinals of Los Cabos

Lorraine Ochoa confessed that he is a lover of all sports, but tennis is one of his favorites, so he is grateful that in Mexico There are tournaments like Los Cabos Open that they bring the best in the world, that, from his perspective, “also changes the lives of many children”, because “seeing the best is impressive”. During the talk about the alliance between Fundación Becar and Mextenis, he appeared on stage Daniil Medvedev to whom the Guadalajara immediately asked for a photo and even had a talk.

Both athletes have been the best in their discipline, the Russian currently dominates the world ranking of the ATP just as Lorena did in the LPGA.

Receive via WhatsApp all our sports news, send the word ALTA in this link