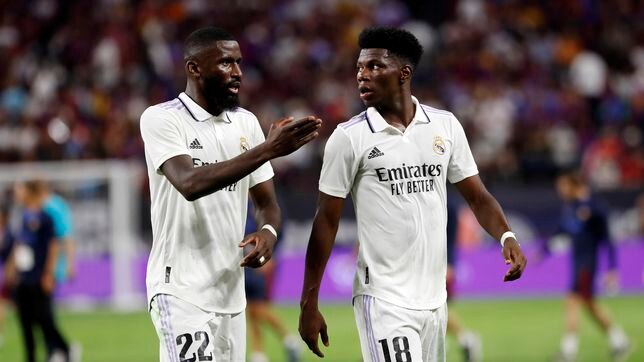 The Real Madrid tour of the United States passed, the third game of the tour against Juventus passed and with it the dress rehearsal that Carlo Ancelotti had announced for the European Super Cup passed., the first title that Real Madrid will play for in this 2022-23 season in which it aspires to six trophies. The Italian already anticipated after the Las Vegas Classic that he would use the match against Juventus as a final test to test a similar (or identical) eleven to the one he will play in Helsinki on August 10 against Eintracht Frankfurt.

And that eleven was formed by Courtois; Carvajal, Militao, Alaba, Mendy; Modric, Casemiro, Kroos; Valverde, Benzema and Vinicius. That is to say, the same one that beat Liverpool 1-0 in Paris to lift the 14th Champions League at the end of last May, the match with which Madrid won the ticket for the European Super Cup. The entire team lasted an hour on the pitch, except for Courtois, who played the full 90 minutes, and Militao, who made way for Rüdiger after the break. A declaration of intent by Ancelotti who, moreover, received the approval of the players with an impeccable performance against Juventus, which they won 2-0; although it is fair to emphasize that the players who took over in the second half maintained their level, so much so that in that final half hour the second goal was scored.

Ancelotti had already warned that he understood the European Super Cup as an extension of last season and, therefore, that he believed that it is the players who won that title who should also try to lift a new trophy in Helsinki. “You have to take into account those who won the Champions… It’s really a continuation of last season, we really want to close it with this title”, he explained after the draw against América.

And this situation means that those who want to become part of Real Madrid’s starting eleven must earn it by knocking down the door, starting with the two summer signings, Rüdiger and Tchouameni. The case of the German seemed simpler, since the theory that they handled in the club was that the German would play center back with Militao, returning Alaba to the position of left back, in which he played so many years with Bayern. But Ancelotti has not finished seeing that path well, for the moment, and he has shown it in the preseason.

So much so that against Barcelona, ​​Rüdiger started… as a left back. The German complied in the position and left the central couple for Militao and Alaba. Ancelotti explained himself after the defeat against Barça: “I’m not crazy, he’s very smart. In that position he can play, and trade with Alaba. He has done well. Alaba will play as a left back only when there is a need, I don’t want to change the pair of center backs from last year.”. An award from Carletto to the defenders of the League-Champions double. The finishing touch for Rüdiger came after the draw against América, when Ancelotti warned: “The starter on the left side is Mendy, the other two can help, one more offensively like Alaba, the other more positionally like Rüdiger”.

Thus, the panorama for the German right now is the following: it is the relief of three positions (the two central and the left side) and that is where the minutes will come. But if he wants to be in the eleven of the great duels, he is going to have to win it. The same as Tchouameni with Casemiro, who starts his first season with a specific replacement for the position (Only Marcos Llorente played that role in the past, but neither Zidane nor Lopetegui gave him much ball; Solari did and that’s where the youth squad exploded, now at Atleti).

The Frenchman has been a strong investment of the club with a view to the future: 80 million fixed and 20 for objectives to get him out of Monaco, nothing less. He wants to start playing now, but he knows that the race is deep and that he needs to remove Casemiro from Ancelotti’s mind as a permanent fixture in the eleven, which is a complicated task: not in vain, the Brazilian has been present in the five European Cups that Madrid have won since 2014, with a leading role in four of them.

Ancelotti tries to distinguish them, not to create direct competition: “He’s a different pivot than Casemiro, he has more chances of reaching the goal. We saw that against Barcelona he had more problems with the ball, he has to position himself better. He has dared more in this match”, he commented after the 2-2 against América. After the win against Juve, he referred to his starting midfielder in much more complimentary terms: “Casemiro, Modric and Kroos? I call them the Bermuda triangle, because the ball disappears when it passes between them…”. Tchouameni, the Casemiro of the future, needs to sneak into that triangle.

They are the two most important cases, but not the only ones. There is another large group of players with aspirations to become Ancelotti’s starters, but at the moment they know that they start on the second row of the grid. As Hazard, whom Ancelotti is improvising as a false strikerobtaining decent results in creating chances, although not very fruitful when it comes to finishing.

Or Rodrygo, one of the men in the last Champions League, with five goals in the entire edition and, especially with one against Chelsea and two against City with which he gave life to a Madrid that was fading in the tournament. His ideal position is the far right and he could sneak in there, but for that he needs Valverde’s level to drop, who finished in full swing last year, assisting Vinicius to make it 1-0 in Paris.

Camavinga and Ceballos also aspire to play more regularly, but they have two towers ahead of them like Kroos and Modric. Nacho has well assumed his relief role and knows that with the arrival of Rüdiger the minutes will be squeezed even more, but he trusts his versatility to end up having a gap. Like Lucas Vázquez, Carvajal’s main soft drink (Odriozola doesn’t count for much). And to all this it is possible to add the possible arrival of a center forward if Mayoral, finally, leaves for Getafe. They all need to break the door down.