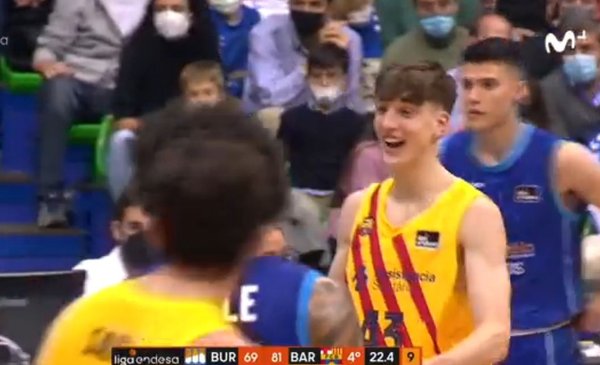 The Uruguayan basketball player Agustín Ubal celebrated in style, with a smile and clenched fists, his first double in Barcelona, his first official score with the Catalan first team, which was highlighted by the club.

The youth took the ball at the end of the game that San Pablo Burgos was defeated by the ACB League, penetrated the rival defense and launched to increase the score for his team and unleash their joy.

“The first is always celebrated,” he commented on his networks, where he pointed out that he had an “unforgettable week”, after having debuted with the Blaugranas in the EuroLeague this Friday.

In the account of the play, they highlighted their celebration. “Young talent who has been in Barcelona for more than two years,” said the rapporteur before his shot. “How not to celebrate! It is no wonder “, he added, to which the commentator pointed out:” The definition of happiness. “

Barcelona also highlighted its double and even the rivals, San Pablo Burgos, congratulated him: “Congratulations @agus_ubal, since you nailed us the lace, it keeps good memories of where it was “, they indicated in their networks.

The annotation also made the news on the Catalan portal Mundo Deportivo, with the title “what impudence!”, where they had also mentioned his debut in the EuroLeague.

A childhood dream come true. Thanks to the Club for giving me this unforgettable opportunity. @FCBbasket 🙌🏻🔵🔴 https://t.co/JNsXMdy1sJ

“The Uruguayan point guard, who already debuted in the domestic championship on the Betis court on matchday five, it is spark, daring, verticality. Ubal had the courage to penetrate swiftly and the mettle to stop once free of pursuers to draw a perfect and neat launch “says the note.

Ubal, 18 years old and 1.98 meters tall, is one of the great promises of Uruguayan basketball who, after training in Barcelona, ​​begins to take his first steps in the Catalans’ first team.

FC Barcelona – Benfica: The probable lineups and where to see this Champions League clash

Ancelotti’s group for the Sheriff unveiled!

NBA: The best tripler is a pvot of...