Home Golf Frédéric Lacroix stands out from the start for his debut on the DP World Tour!
Golf

Frédéric Lacroix stands out from the start for his debut on the DP World Tour!

Delayed by a storm, the first round could not be completed this Thursday in Joburg but these disturbances did not affect the player of the St Laurent Golf Team Frédéric Lacroix who took place in the morning in the leading group thanks to a very solid 67 (-4) two points behind the two provisional leaders.

Who says new season, says new faces. This first round of Joburg Open, initial tournament of the DP World Tour, smiled at a new tricolor representative on the elite. Frédéric Lacroix, fifth in the Challenge Tour last season, recorded a card of 67 (-4).

Starting from 10, he first signed a go in the par before accelerating with three birdies on the first four holes of the return. He then made a nice chip for eagle on the 6, then conceded a double on the next. The Parisian finds himself in 4th provisional place this Thursday evening.

The endless rise of Hidalgo

If the tricolor is not in the lead, it is because three players have mastered this even better Randpark GC located at Johannesburg. Member of the Alps Tour at the start of the year, winner of the Challenge Tour during the summer, Angel hidalgo continues his progression and Thursday he took the lead alone at the clubhouse with his 65 (-6).

Thriston Lawrence Joined him at the top of the standings, but the South African will have to complete his first lap by going to the 9 Friday morning. English Ashley Chesters alone occupies the third step of the podium one stroke behind.

He also a member of Team ST Laurent and deserving promotion of the Challenge Tour, Julien Brun (20th) also started his first season on the DP World Tour perfectly. The adopted Praguois signed two birdies without committing the slightest error but is one of those who will have to get up at dawn this Friday since he has two holes to play before tackling the second round.

3 holes to play for Robin Roussel

Robin Sciot-Siegrist (31st) and Romain Langasque (43rd) were able to complete the 18 holes on time, before the game was interrupted. With respective cards of 70 (-1) and 71 (par), the two Frenchmen are in the nails after this first round.

On the other hand, it is more complicated for Robin roussel (68th) +1 to 15, Joel Stalter (90th to +2) and Ugo Coussaud (105th, +3). Hopes are however high since the cut according to forecasts should be around par.

The Jaguar for JC Ritchie

First tournament of the year and first hole in one. South African JC Ritchie took his iron shot on 17 and at the same time won a beautiful yellow Jaguar. 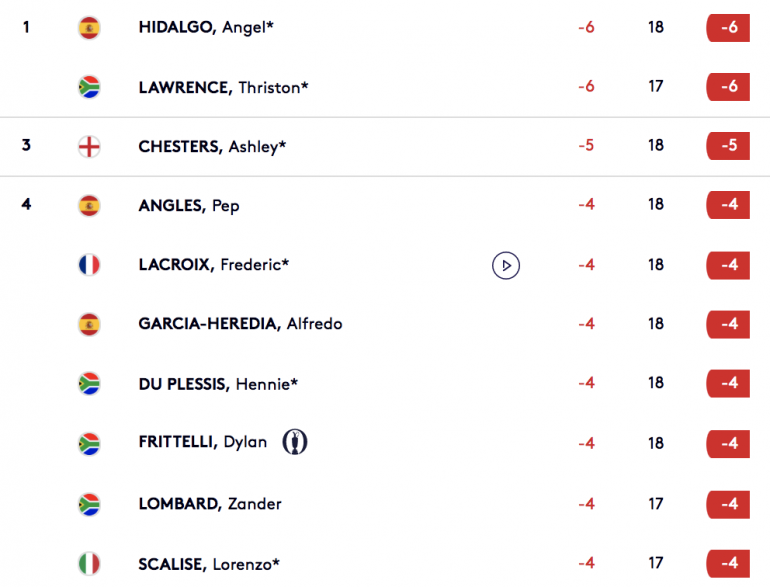 Golf: Tiger Woods refuses to talk about his...

Top start for a two-week marathon

Tiger Woods spoke after the serious accident: the...