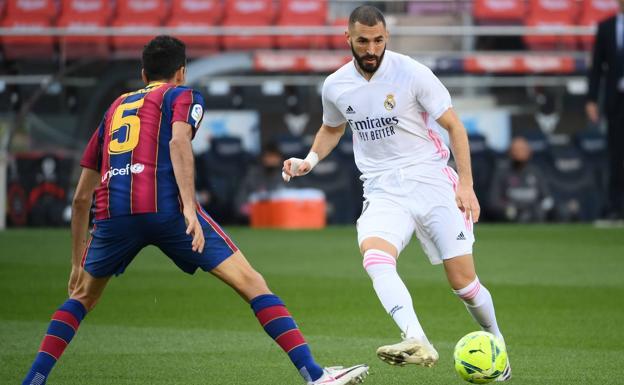 Benzema, in an action against Busquets during the classic at Camp Nou last season. / Lluis Gene (Afp)

The two teams face a decisive month, with the duel on October 24 at the Camp Nou as the main course

Real Madrid and Barcelona will have no respite after the national team break. Both teams face a calendar of infarction with up to seven games in just 20 days, among which is neither more nor less than the classic. The duel between whites and Catalans seems more crucial than ever after a month of September plagued with doubts and with the need for the two teams to reinforce self-esteem and hit the table against the eternal rival.

Leo Messi, Cristiano Ronaldo, Andrés Iniesta, Xavi Hernández or Sergio Ramos will no longer be there, but a classic is a classic and all planning is determined by that match that will stop the planet football. For this reason, the national team stoppage has served to gain strength for the next four days of the League and the next two of the Champions League, competitions in which Real Madrid and Barcelona have punctured and in which they cannot afford to lift their foot from the throttle.

Barcelona is the team that arrives most in need in these 20 days without respite. The blaugranas left for the national team break in the midst of a sports crisis and return with a calendar in which they will face Valencia, Dinamo Kiev, Real Madrid, Rayo Vallecano, Alavés, Dinamo Kiev and Celta Vigo again. In this period, Koeman’s men will have to clear all doubts about their performance and add the six points in the Champions League and the maximum possible in the League, a competition in which they are ninth, although with a less disputed game.

With the aim of winning everything, Ronald Koeman will be able to recover troops. In addition to Ansu Fati, Pedri and Jordi Alba, already training at the same pace as his teammates, the Dutch coach could have Sergio Agüero and Ousmane Dembélé at his disposal throughout this month of October. The return of the two attackers is essential for a Koeman who has already dropped on more than one occasion that the lack of punch is one of the team’s problems so far this season.

Despite the return of the injured, the calendar will pose a new challenge for a Barcelona that does not have the depth of staff of other seasons. Last month, with a similar agglomeration of matches, the Catalans accused the number of matches and scored points against Bayern Munich, Granada, Cádiz, Benfica and Atlético. «What I don’t understand is how they put us on a calendar in which we play on a Tuesday, then we have the whole weekend to play and they put us to play on a Monday, and then play today Thursday and then Sunday at four in the afternoon , to return to play on Wednesday in the Champions League and on Saturday against Atlético de Madrid “, said Gerard Piqué in the middle of Everest prior to the national team break.

If the mountain of Barcelona in the next 20 days is steep, so will that of Real Madrid. The whites will not play this weekend against Athletic because they will play Conmebol matches on Friday 15 that led to the postponement of the pulse against the lions, but they will have a crucial match in Ukraine against Shakhtar on Tuesday 19. That day those of Carlo Ancelotti They will play against a rival that already complicated the group last year. A game that will serve as an aperitif for the classic that same weekend. Osasuna, Elche, again Shakhtar and Rayo Vallecano will close the marathon before the next break in November.

To face this decisive month, Ancelotti will resort to all the wardrobe that he has been polishing in the first months of competition. The Italian coach has broadened the group of trusted players who can start from the starting eleven with Marco Asensio already recovered for the cause, Camavinga as an alternative to the traditional white midfield and Vinicius and Rodrygo getting closer and closer to eating Hazard’s toast . With all this and the usual pillars such as Kroos, Benzema, Modric or Casemiro, the whites hope to reach the November slope well and crown in the classic, the most anticipated duel.

They promote sports and volunteering in Apizaco; IMJuventud and Sports Directorate sign an agreement

knowing how to swim, a necessity in life

Qatar assures F1 drivers will be able to...

“They made his heart burst”

Sports scientist on Kimmich and consequences for unvaccinated...