Home Sport news Carlos Sainz: «I give the sheet to the mechanics a lot with next year»
Sport news

Carlos Sainz: «I give the sheet to the mechanics a lot with next year» 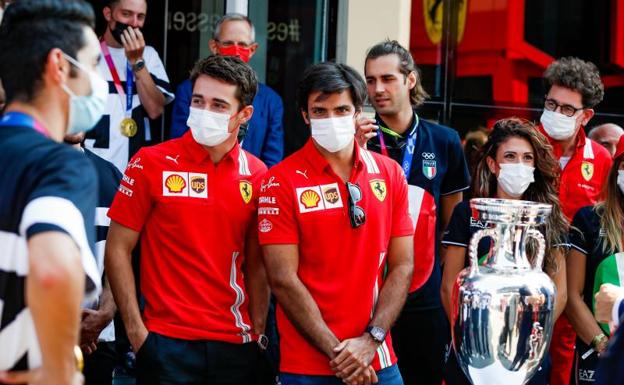 The Ferrari driver is optimistic but still with room for improvement to feel completely comfortable in the Scuderia, as happened in McLaren

Just before embarking on the trip to Sochi, where he suffered one of the biggest scares of his professional life in 2015, Carlos Sainz stopped by Madrid for a meeting with the press, an opportunity especially appreciated by journalists who cannot cover ‘in situ’ the great prizes. As he enters the final stretch of his rookie season at Ferrari (which is almost a new restart of his career), Sainz feels more and more comfortable in the team. And that shows on the track: the results speak for themselves. Seventh with 97.5 points and a podium, he can only qualify as remarkable his 2021 … although as always he does not get a note.

His adaptation to Ferrari is being good, but he still has it. It’s a trick question. You see that I am going fast and comfortable, but there are still errors due to lack of knowledge of the car. I keep paying it. You have to spend years with the team to get the most out of it. We already saw it at McLaren. Every time I adapt more, but there are times I think: ‘How I would like to have known this or that’ “, he admits. Along the same lines, he points out that although the podium in Monaco was his best result, he remembers that he fell short by not getting pole the day before. «There is still enough, eight races. I thought there was less left and there is a third of the season left. There are circuits that I like, like Austin or Mexico, where I have always been fast. I want to keep improving and going faster, learning about the car and feeling more comfortable. Right now the team is very focused on next year, and although we all think in the short term, in Maranello they are well above next year. I give a lot to the mechanics with how the car is going, “he revealed.

And it is that 2022 is on everyone’s mind. It is a critical moment, where Formula 1 is going to restart with the regulatory change. Before, he does not rule out giving another great headline to the media this year. «I wish there were some more surprises, that I could fight for a podium on merit like in Monaco or Silverstone. Why not try to have a surprise in these eight races where the car is there for it. We’ll see. In the circuits that remain there is no clear opportunity, but in Silverstone or Hungary it was the same and we were there, “he recalled. Of course, the focus is what it is, to the point that day by day its primary function is to prepare for next year. «The simulator sessions that I am doing are 90% for next year. The objective is to reach the maximum number of preparations for next year, and leave everything to us, ”he insisted.

Being a Ferrari driver outside of F1

Arriving at a historic team like Ferrari has allowed him to experience unique moments, like a few days ago when he was in a triplet and was able to ride his parents and sisters. «It is something that I will never forget. And the GP in Monza, with the ‘tifosi’, who almost overturned my caravan with the illusion of having a Ferrari driver close by. Or be at my office in Maranello and get a call to try a classic Ferrari at Fiorano. These are things that do not happen in other teams. I’m starting to enjoy the experience of being a Ferrari driver, ”he said.

The adaptation to Ferrari is absolute, to the point that he is certainly annoyed by the comparison with McLaren, more so now that Daniel Ricciardo (his replacement in Woking) has just won. “When I was fighting for pole in Monaco, nobody asked me about McLaren or if I missed him. Now that he has won, they ask me. Last year I was very close to winning at Monza… Do I miss McLaren? No. I am enjoying F1. I have a lot of confidence in Ferrari in the long-term project and we are working very hard to win it, “he concluded about it.

At 27 years old, he is in full sporting maturity, and he knows well who his references are: his father and Fernando Alonso are well over 40 and are still active. Will your career last that long? «My working method is to try to extend my sporting career and prepare myself to be as long as possible. For me, athletes who seek to extend their sports career is a commitment to their sport. If I’ll be 38 or 40, I don’t know. Right now I would tell you that I do. I am working for it, for health reasons, it is something that everyone should do on a smaller scale, “he said.

Much remains to be disputed. Including, for example, fighting for third place in the Constructors’ World Championship with McLaren. “We know it is difficult, but if we manage to be third it would be very good to get stronger next year,” he said. It is clear what the focus is.

[VIDEO] CdMx: “73 thousand tennis”. Family spends more than a million pesos in one day (Note of However)

Joe Johnson continues to hope for a comeback in the NBA