The Suns and the Grizzlies are solid, LeBron James too

Phoenix won without trembling in New Orleans, to consolidate his second place in the Western Conference on Tuesday in the NBA, while Memphis and Ja Morant confirmed their excellent pass in Cleveland and LeBron James won the Lakers against Sacramento.

In the lead all along, the Suns did not panic when Devonte Graham (28 pts) brought the Pelicans back to two lengths, at the start of the money-time.

Chris Paul (11 pts, 15 assists) took matters into his own hands and got his team back on track, Devin Booker taking care of putting on the baskets (33 pts, 9 rebounds), well helped by Mikal Bridges (23 pts, at 9/13) and Bismack Biyombo (16 pts, 6 rebounds, 3 blocks) effective in the racket.

In back-to-back, after their resounding victory the day before in Brooklyn, the Grizzlies did not weaken in Cleveland (110-106), where Morant, in the wake of his superb performance against the Nets (36 pts), has made the difference on his own, scoring his team’s last eight points with 1 min 36 sec to go.

Author in the end of 26 points and 6 assists, he killed the suspense with in particular an extremely difficult basket, by remaining suspended in the air longer than his defender, before making an interception on the next action to score on the counter-attack. .

“I had some important shots to conclude. At the end of a game, I like to be the guy who takes the shot,” said the best rookie of the 2019-2020 season, well supported by Jaren Jackson Jr ( 22 pts), the French Killian Tillie, still holder, having been discreet inside (5 pts, 3 rebounds).

Memphis consolidates its 4th place in the West, the Cavaliers slipping into 6th position in the East, despite the efforts of Darius Garland (27 pts, 10 assists) and Jarrett Allen (22 pts, 12 rebounds).

In Los Angeles, the Lakers also made the difference in the money-time, when LeBron James pulled out all the stops by planting 14 of his 31 points (5 assists, 5 rebounds), to beat Sacramento (122-114).

A third consecutive success, also due to the paying efforts of Malik Monk (24 pts) and Dwight Howard (14 pts, 14 rebounds), which allows the 2020 champion to return to positive (20-19) and overtake the Clippers in the 7th square.

This 4th consecutive setback pushes the Spurs 11th in the West, with the same record as Portland (14-22).

Julius Randle scored 30 points for his return with the Knicks, in his team’s victory over the Indiana Pacers on January 4, 2022 in New York / GETTY IMAGES NORTH AMERICA / AFP

At the same place in the East, New York defeated Indiana (104-94) at Madison Square Garden, where Julius Randle (30 pts, 16 rebounds) made his comeback, after having to submit to the anti-Covid protocol.

The Knicks were also able to count on RJ Barrett (32 pts, 8 rebounds), to compensate for the big air gap of Evan Fournier, author of a rare zero point in the scoring (0/4, 2 assists) which to him was worth staying on the bench during the last quarter. 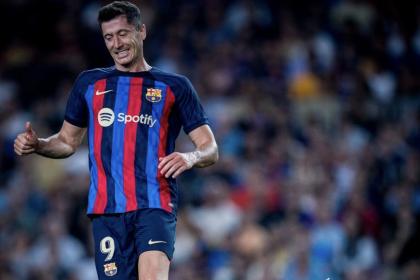