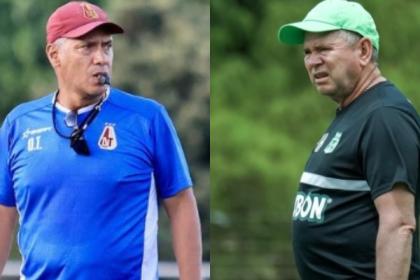 The situation could not have been more difficult for Deportes Tolima and Atlético Nacional, in a final that had all the ingredients: physical display, anguish and a lot of attack, good football for long stretches and talent, the one that decides everything, especially titles. The joy was for the green after the final 2-1, a 17 star covers the defects in Ibagué and that revalidates the phrase that does not cease to be true because it is a drawer: soccer belongs to soccer players.

Hernán Torres did not have too many options: let go of the full-backs to add them to an attack in which Ureña and Rovira had to multiply their mark and start and suffocate with Ibargüen, Cataño, Lucumí and Caicedo. Plata was unable to overcome his injury.

The goal was a goal as soon as possible and he achieved it: at 18 minutes Hernández forced Olivera’s own goal. It was necessary to continue long but Ibargüeny was injured and that was how Miranda, the newcomer, opened the way to 2-0 with an impeccable center to Caicedo. Series tied at 36 minutes. Mission accomplished.

Meanwhile, Herrera’s bet was clear: keep the two brand men (not three, as feared) and add Andrade, hoping that he would add a brand but also association and pass on the counterattack, with Mantilla and Pabón as wingers and Jefferson Duke on point

But on the field, Nacional’s great weakness was the wingers Mantilla and Pabón: they knew that their first obligation was the mark and not only did they not comply, but they were also not clear after the goals to regain control of the game.

Tests? In Tolima’s first goal, Pabón looks at Junior Hernández even inside the area; in the second Mancilla never manages to cover and Miranda passes free with Banguero for the center to Caicedo.

But the second half came and the situation changed dramatically: Tolima was left with ten after taking a penalty that Cataño wasted and that later, in an effort to take the rebound, cost Mier a red card due to a foul. Herrera had already taken out Duque and Andrade, both inconsequential, and had given way to Guzmán and Mejía to secure the ground. He gave him results with ten and it was then that he bet on Gio Moreno, with which he won ownership and partnerships. Result? He threatened with the discount in the 69th minute when Pabón’s goal play was well annulled due to Duque’s offside.

The sacrifice would come. Tolima understood that he could not continue betting on opening those spaces like in Medellín and Caicedo left to give his place to Ramírez. He was fresh but his team was not: the great effort of the first half took its toll, Lucumí had no savings to get back on the mark, Ureña and Rovira felt the rival’s extra man and could not disconnect Moreno -recently arrived-, who added a threatening pause against an exhausted opponent.

And so the 80th minute arrived and Torres, aware that he would no longer achieve the feat of the third goal due to fatigue, decided to bet on penalties while Herrera played it in the closing with Jarlan Barrera to score the goal that would avoid that definition. It came to work for him after 90 minutes, in a corner kick in which they left the shortest player alone in the area and the title was resolved like this, by dint of individualities, the same way by which the green reached the final: a goalkeeper who saved a penalty that could have been definitive and a bench that resolved the suspicion of overconfidence in coach Hernán Darío Herrera. Today happiness is all green!