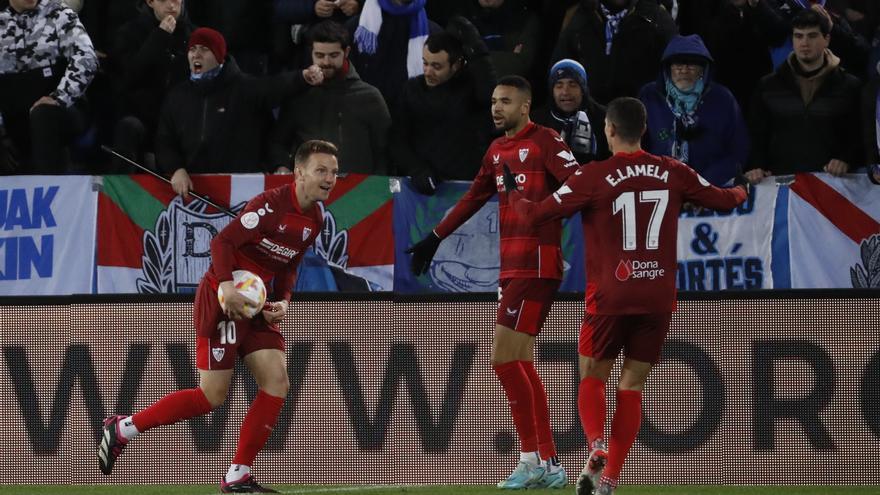 An iron shot from the Sevilla player after passing through the changing rooms saved the furniture of a team that was surpassed by a Second Division team that cornered him at times but found himself with a great Marko Dmitrovic.

The locals started hungry. They forced four corners in the opening minutes after they Jason Remeseiro gave the first warning 30 seconds after the start with a shot that was poisoned after hitting the rival defense.

The stopped ball put fear in the body of the sevillistas who endured the runaway start of an Alavés who was forced to run after the ball after Jorge Sampaoli’s men, who watched the game in the stands, passed the local pressure.

Luis Rioja warned with a cross shot at the culmination of another of the albiazules arrivals in Marko Dmitrovic’s domain, forced to work on strategic plays.

While, neither Acuña nor Rakitic found friends in their filtered passes in a well-planted local defense.

The first half hour passed without much fanfare from either team, although it was Alavés who showed the most desire to go for the game.

At that moment Nemanja Gudelj he was forced to stop dead at a thrown Mamadou Sulla that he went alone towards the Seville goal, in an action in which the expulsion of the Balkan defender was claimed, but Soto Grado left him yellow.

Dmitrovic saved Alavés’ first goal in the 32nd minute, in the subsequent play, after a drop by Víctor Laguardia in a free kick perpendicular to the Andalusian goal, which Luis Rioja put next to the post’s strain.

Sevilla took the lead after going through the changing rooms after a good group play that culminated Ivan Rakitic with an iron shot at the far post to a pass from the newly incorporated Jesús Navas.

Despite the goal, Alavés did not change their script and continued with their offensive spirit and showing their teeth at the Andalusians. Jason Remeseiro found Dmitrovic in a good free-kick that the squad was looking for.

Set pieces were once again the biggest threat for the Basques in a phase dominated by localsin which the stands claimed the second warning for Badé, who stopped a counterattack from Alava.

Sevilla tried to sleep the game in view of the revolutions that Alavés printed with the changes of Luis García Plaza, who launched himself for the game leaving three pure defenders.

However, the babazorros could not finish braiding their arrivals. The visiting goalkeeper reappeared in the discount to avoid the tie of Jason Remeseiro and Salva Sevilla crossed too much the last one that the Glorioso had in the last breath.