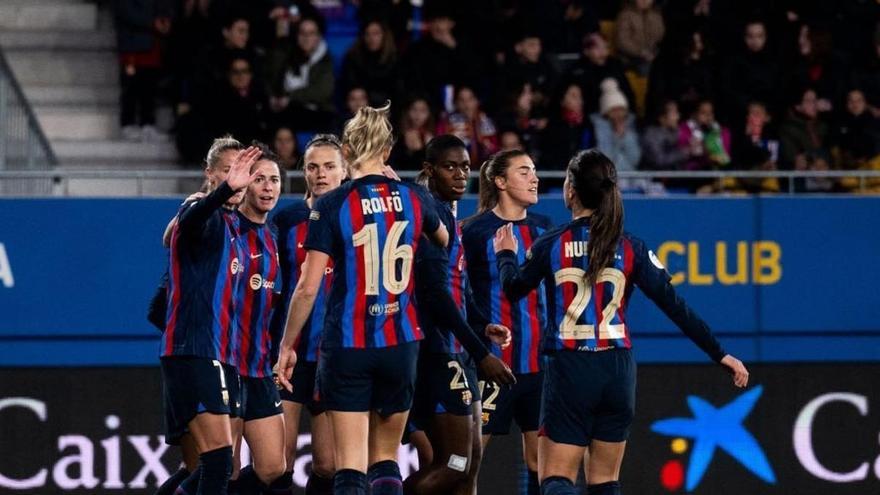 Jonatan Giráldez’s Barça adds a new one record on his record. With the last victory against Llevant Les Planes, the Blaugrana team has become the first team of professional football – women’s or men’s – to be added 50 consecutive wins in league The team’s last defeat in the national competition was on June 1, 2021, two days after achieving the treble, against Atlético de Madrid, and still with Lluís Cortés on the Blaugrana bench.

Until now the record belonged to theOlympic of Lyon, their greatest rival in the Champions League, who achieved 46 consecutive triumphs from December 2011 to January 2014. Barça, with the defeat against Atlético in 2021, lost an unbeaten run – in the league – of 758 days . And since then, they have not found themselves on the road to defeat again. 50 victories and 247 goals in favor.

Llevant Les Planes met Johan Cruyff on Barça more devastatingthey dominated every facet of the game and barely allowed them a shot on goal in the 90 minutes of play.

Rolföwho played this Wednesday as a winger and not as a winger, is leaving appropriate from the left side and challenged Garrote and Bou, who were unable to cope with the physicality of the Swede, who was easily planted in the opponent’s area.

Crnogorcevic es he soon took care not to leave the record to chance. He took part in the first four goals of the Blaugrana and annulled any hope he might have left at Llevant Les Planes. The Swiss attacker scored the first from the far post after an assist from Rolfö, who showed technical quality in the area to get rid of Garrote and find the Blaugrana on the side of the area.

The right winger was one of the architects of the Blaugrana triumph and, after a change of heart from Clàudia Pina, assisted Asisat Oshoala, the top scorer of the team and with very clear options to revalidate the ‘pitchitxi’. It was also Crnogorcevic who put the icing on the scoreboard by scoring his own doubled and deciding the match before the break. Again, after an assist from Clàudia Pina, he finished in front of Bacic, who, although he stopped in the first instance, scored his own rejection, which made it 3-0 for Blaugrana.

With the number ’30’ on her back, Vicky López is called to be a very important footballer in the Blaugrana project. She was the player month young to debut and she is also already the precocious scorer. Despite the fact that he arrived for the Blaugrana subsidiary, he showed this Wednesday that he has the level to be in the first team. He generated a lot of play in the first half, but ran into the post and Bacic.

🔥 Vicky López is the youngest goalscorer in the history of Barça! pic.twitter.com/O9HC2rFj00

Nobody could stop her in the second half, with a first goal with the first team that will not go unnoticed. She was assisted by Crnogorcevic, who concentrated the defense of the Plains and left sola to frontal of the area the midfielder, who finished from full to add a new record to her palmares.

The Nigerian forward has already redeemed herself from a bad start to the season. Oshoala has passed from frustration to euphoria. Against Llevant, Les Planes again demonstrated its great moment of form and established its place as the team’s top scorer, with 10 goals in League F and 15 in total.

Oshoala has become in the last games the finisher that the team was asking for. His second goal of the game came after the recovery of Pina, who assisted the Nigerian at the front of the area to make it 5-0 on the scoreboard. And eight minutes later, he made it 6-0. After a shot by Mariona, the Nigerian, tireless, took the rebound in the small area and beat the goalkeeper.

After scoring three goals against Llevant Les Planes, Oshoala brushed aside his insistence on the goal and went in search of Mariona Caldentey’s goal. And he succeeded. She went down the right side to assist the penalty spot for the Mallorcan, who missed her first shot but was faster than the two defenses of the opponent and collected her own rejection to score the Definitive 7-0.

Feelings of happiness in Cologne, but worried about Selke