World Cup: England unleashed, the “One love” armband abandoned… What to remember from Monday November 21 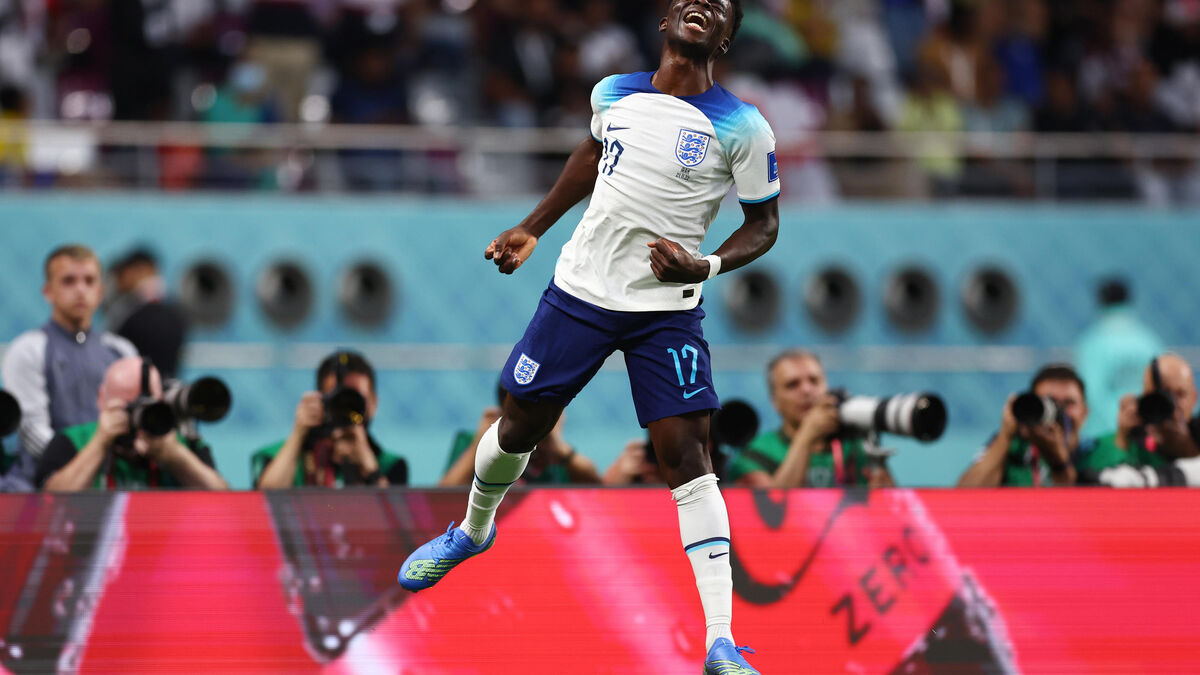 Stop purring. In the aftermath of a rather soft start, England increased the volume from the first match of the day. The “Three Lions” easily beat Iran (6-2) and took the lead in Group B, ahead of Wales and the United States, forced to a draw (1-1). Meanwhile, the Netherlands have made their realism speak against Senegalese deprived of Sadio Mané (2-0). A day of football, therefore, but also of arm wrestling, with the end of the soap opera around the armband “One love”.

The knockout suffered by Iranian goalkeeper Alireza Beiranvand did not plunge England into a false rhythm. The exit of the doorman, completely stunned, took some time to take shape. A few moments of respite before Team Melli fell into the English whirlwind. The Three Lions confiscated the leather and piled up the goals late in the first half. If they did not breathe serenity on the goals scored by Mehdi Taremi and that adversity was not really there, the men of Gareth Southgate displayed more collective ambitions than during their previous campaigns international.

The intensity did not drop during the game between Senegal and the Netherlands. A ping-pong match, where the ball traveled from one surface to another, without either team having a real chance to smash a winning shot before the break. Senegal gained confidence, perhaps too much, because the Lions were surprised by the back of the head of Cody Gakpo and the bad dismissal of Edouard Mendy, in the legs of Davy Klaasen. A well-paid but sufficient Dutch victory to join Ecuador at the top of Pool A.

[📺 RÉSUMÉ VIDÉO] 🏆 #beINFWC2022 #SENNED
🥵 In a long undecided match, the Netherlands take the best of Senegal!
🔥 A 2-0 victory at the end of the suspense, thanks to Gakpo and Klaassen!
🤕 Note the injuries of Diallo and Kouyaté! https://t.co/IOokbLqSfn

Finally, the United States led for a long time, propelled by former Parisian Timothy Weah at the end of the first act. The Welsh were boosted by half-time, retaining enough freshness to equalize in the 82nd minute. Gareth Bale took charge of converting the penalty he got himself. This draw suits the English rival, favorite of the group and alone in the lead with three points at the end of the first day.

Harry Kane didn’t even need to score. Against Iran, the top scorer of the 2018 World Cup was eclipsed by two stars of the English selection: Bukayo Saka (21) and Jude Bellingham (19). The latter rose in the sky of Doha to catapult a good ball from Luke Shaw with his head and open the counter for the Three Lions. The midfielder of Dortmund brought his dynamism and created many shifts well exploited by his attacking partners.

Among them, Saka scored twice. His volley, on a clever delivery from Maguire, punctured the opposing skylight. The Gunner also proved his lucidity when scoring England’s fourth goal. Found at the entrance to the surface, he took his time, settled into an armchair before adjusting the Iranian goalkeeper.

The highlight: “One love”, it’s over

Faced with the “yellow card” threat brandished by Fifa, the European nations have given up on the “One love” initiative. The English, Welsh, German, Belgian, Dutch, Swiss and Danish federations had planned to provide their respective captains with an armband to promote inclusion and fight against discrimination. These selections were ready “to pay fines” but did not want to expose their players to penalties on the ground, according to a statement signed by the seven allies.

First and second periods combined, 27 minutes of additional time were counted during the game between England and Iran. These extra-time stoppages are explained by the shock suffered by goalkeeper Alireza Beiranvand as well as by the new directives from Fifa. Losses of time due to Var interventions, celebrations or substitutions, among others, are now compensated.

This rab notably allowed Mehdi Taremi to reduce Iran’s score on penalty (90th + 13), the latest goal in the history of the World Cup, excluding extra time.

The sentence: “It will surely be my last World Cup”

The information is not surprising but reminds us that time also passes for the artists of the game. Lionel Messi is about to play his final World Cup. “It will surely be my last World Cup, my last chance to realize this great dream that I have, that we all want,” he announced at a press conference.

And the future opponents of the Albiceleste can tremble. While he had trained away from the group several times last week, the Argentine number 10 reassured his supporters: “I feel very good physically. I’m having a great time, both personally and physically. I have no problem. I trained separately because I received a blow (on the ankle), but it was as a precaution. »

The unusual info: the emotional elevator of Ismail Jakobs

A few hours before the kick-off of Senegal-Netherlands, Aliou Cissé could not put the name of Ismail Jakobs on the score sheet. However, the Monegasque replaced Abdou Diallo on the hour mark. The change of sporting nationality of Jakobs, ex-German Espoirs international and born in Cologne, was validated during the day by Fifa. The Lions hoped to be able to count on him for the next game. The 23-year-old side finally discovered the World Cup as soon as Senegal entered the fray.