11/18/2022, Xalapa, Ver.- The Veracruzana University (UV) hosts the third edition of the Basketball Camp, which takes place from November 18 to 20 at the “Nido del Halcón” University Gymnasium, located on the Campus for Culture, Arts and Sports.

This event is organized by the Basketball Academy alliance hawks UV and Chileros de Xalapa, in conjunction with the “Tu Futuro Basketball (TFB)” program; Participating students from other basketball schools in the city and state will train for three days and will have the chance to be evaluated to be considered for future recruiting.

This was announced at a press conference headed by Facundo Pacheco Rojas, General Director of the UV Foundation; Rubén González, president of the Basketball Academy hawks UV and Chileros from Xalapa; Alfredo Lobato, representative of the TFB program and technical manager of the camp, and Gustavo Plascencia, youth world champion of school games.

Facundo Pacheco explained that the Basketball Academy hawks UV is the comprehensive sports program of the UV Foundation, which has a staff of 13 coaches with sports certifications. 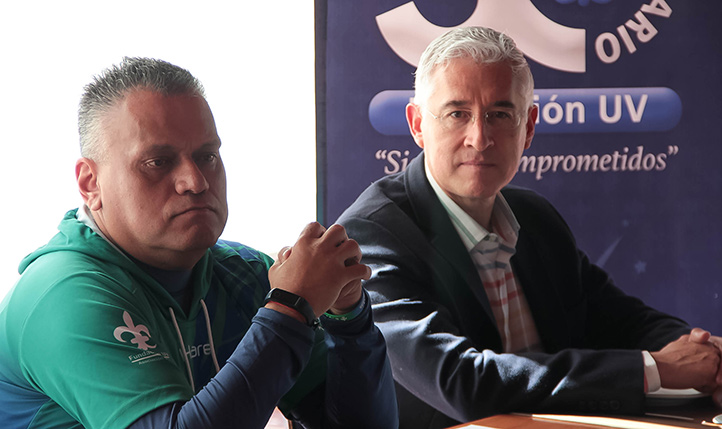 He shared that for a year and a half he has been operating in collaboration with the Chileros de Xalapa organization, an alliance that has generated results, since during this time there has been significant growth in enrollment, reaching almost three hundred students who occupy basketball as a complementary way of life.

Rubén González stated that the purpose of the Basketball Academy hawks UV is to use sport as a common thread to train comprehensive citizens who contribute to society.

He affirmed that “Your Basketball Future” is a unique organization in the country, creator and discoverer of talent, which makes it an excellent ally to carry out the camp.

He shared that those who stand out for their skills within the camp will be invited to an event called Showcasewhich is carried out with coaches from the United States and Mexico, which in turn will serve as a filter to access the next stage that bears the name Elite Camp.

He highlighted that to date, TFB has managed to benefit more than 100 young people by generating links so that they can obtain a scholarship.

Gustavo Plascencia, who is part of this organization, stated that through it he does not knowfromlo is looking to identify basketball players who show their talent immediately, but also those who are very good at the sport and have not been discovered.