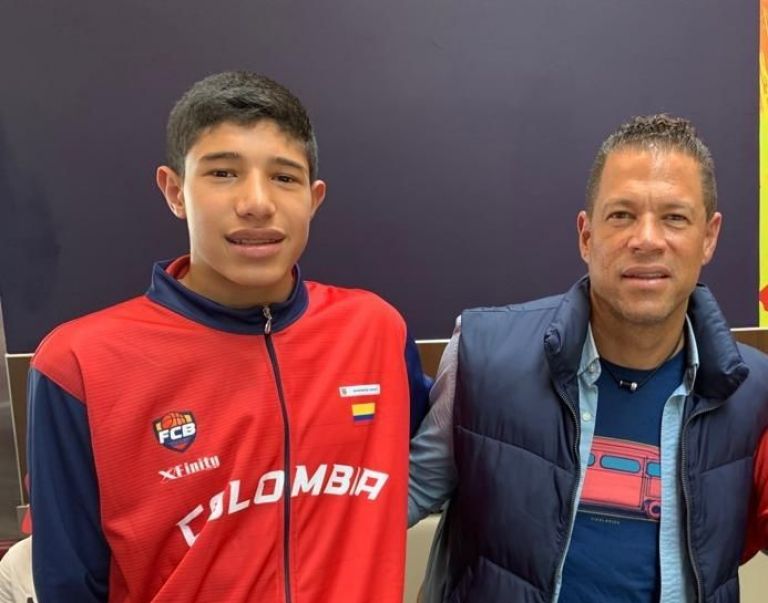 Adrián Córdoba is 14 years old, he measures 1.91 meters. and he is the top rebounder in the tournament representing Colombia for the first time in an international tournament.

In the South American basketball U15 that is being played on the Obras field, the teams seek to qualify for the FIBA ​​Americas U16 with the best young talents that already ask for clue.

Among them, several surnames with a history in basketball appear in the Argentine team, such as Tomás Scola, Matías Dominé, Gino Ciorciari and Felipe Minzerrepresentatives of the 2007 litter that is beginning the path in the selected, children of former professional players who inherited the passion for this sport.

In the Colombian roster with the number 4 shirt appears Adrian Cordoba, who also copied his father’s taste for sports. Y After having tried his luck under the three sticks, the skinny and lanky son of the famous goalkeeper, chose to keep the orange ball.

The popular former Boca goalkeeper (1997-2001) and the Colombian national team (1993-2006) played basketball when he was a boy and welcomed Adrián’s change of sport. In fact, another of Óscar’s daughters, Vanessa, is dedicated to tackling in women’s football Giving continuity to the paternal legacy.

But in the case of the youngest in the family (who has already surpassed his father in height), basketball beat soccer and thus he stopped occupying a place in the goal to bet fully on his other passion.

“I was a goalie. My dad told me to start playing basketball and I fell in love with basketball”Adrián said after grabbing 12 rebounds in his first game for the Colombian U15 team at the Sudamericano in Buenos Aires.

He knows that his father is very loved in Argentina, especially by the fans of Boca, and He says he feels very comfortable in the city where his father shone in football, but he only knows his career through the videos that Óscar himself showed him.

“It’s a very cool experience. I like the atmosphere here,” said the little giant very enthusiastically. But he shyly clarified that no one has yet discovered that he is the son of Óscar Córdoba and for now he has not received any comments on the matter. Except for this chronicler who made him blush by asking him to do an interview before the charges of his companions.

the famous “marabout” of the player comes out of silence!

Falivene “A Consortium in the future of Top Volley Tank”