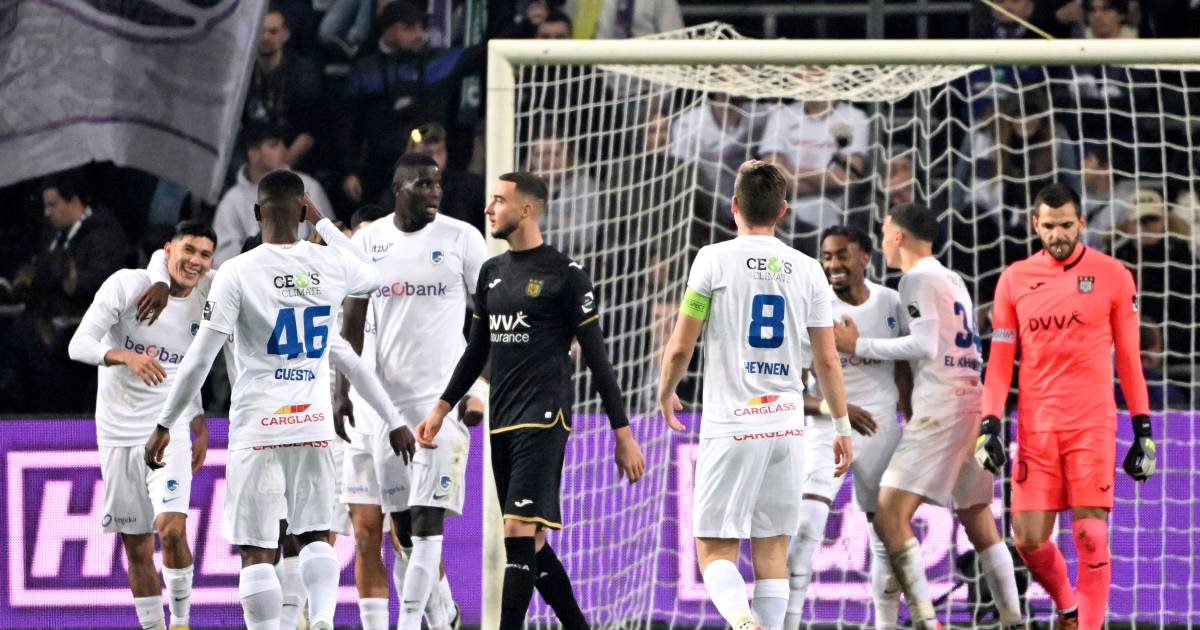 Belgian footballRacing Genk enters the World Cup break with a great feeling. The Limburgers took their tenth win in a row against Anderlecht. The leader went on to win 0-2 in the Lotto Park and deepens the gap in second place again. Once again, the match was marred by misbehavior by some supporters.

LOOK. Ultras launch a volley of flares onto the playing field. Match is stopped for minutes

It just keeps going. The Lotto Park was also full of smoke a few minutes before rest. Match interrupted for a few minutes. Not only with purple smoke bombs and Bengal fire this time, but even with real fireworks. First outside the stadium, not much later in the stands. The 10th anniversary of the ‘South Leaders’… Wrong party.

Not that the supporters really had any right to complain about fireworks on the field. Genk had the best chances, but to say that Anderlecht did not come in the lead against the proud leader would be an exaggeration.

Racing Genk started sharply, but first El Khannouss – in the underbelly of Onuachu – and then Trésor – on Van Crombrugge – did not score. On the other side, Verschaeren aimed too high on Amuzu’s pass. A class flash from El Khannouss broke the spell after 19 minutes. Lovely splitting pass to Muñoz, who gave Onuacho (again him) the 0-1. His thirteenth (!) in eight matches.

Anderlecht continued to participate nicely after that, also because Genk played football from one seat. The very young Anderlecht defense had a hard time with Genk’s offensive impulses. Veldman had dropped Sadiki in the team at the expense of Murillo, but the latter had to show up after half an hour. N’Diaye was put out of his misery. It gave Amuzu another chance before half-time, but we could hardly call his soft attempt a shot.

The injured Vertonghen calmed down the Anderlecht supporters during the break. However, a few minutes after the break, their hopes of winning points were painfully crushed in front of them. Again sublime preparatory work by El Khannouss, Arteaga then ran Paintsil’s cross over the goal line without realizing it himself. 0-2.

Anderlecht had to come. Verschaeren couldn’t get the ball past Vandevoordt. It didn’t really pose much of a threat. The difference in quality between these two teams is too great for that. Even after the (disputable) red card for Arteaga, the number of opportunities for the home team remained scarce. It was no longer possible to score.

Anderlecht lose for the first time under Robin Veldman, Racing Genk is just 10 points clear of first pursuer Union. Wouter Vrancken and his colleagues can take a break undisturbed during the World Cup break, if they are not in Qatar. It is hoped that Roberto Martínez has watched the tricks of El Khannouss, soon to be seen in the shirt of Morocco.