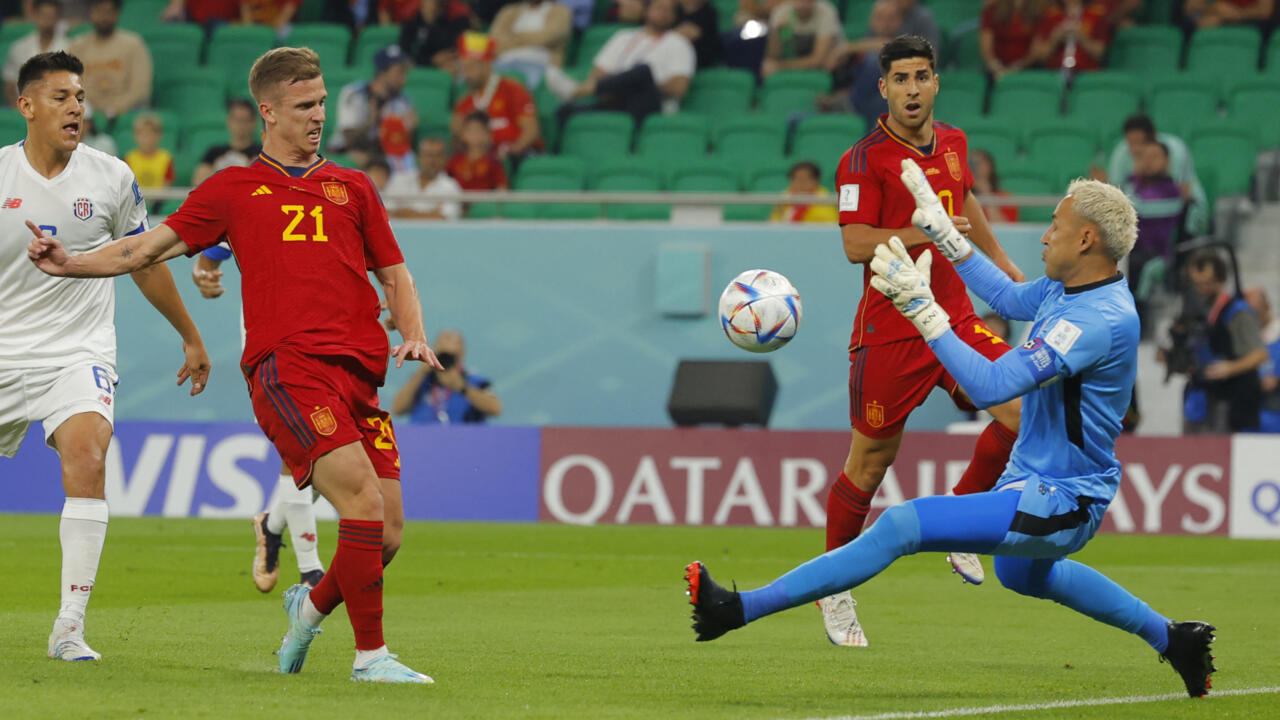 For its entry into the running in the World Cup-2022, Spain won in large widths against Costa Rica (7-0), Wednesday, in Doha. The Costa Ricans quickly sank against the possession game of La Roja, who knew how to concretize their highlights.

After Germany’s surprise defeat against Japan (1-2), Wednesday, November 23, Spain had the opportunity to take a three-point lead over the Mannschaft in the event of success for this first match of the World Cup-2022. . And La Roja won well in the big widths (7-0) against Costa Rica at the Al-Thumama stadium in Doha.

Spain start the match in a classic 4-3-3 against Costa Rica grouped in 5-4-1. La Roja, as usual, started the game with a possession game dear to coach Luis Enrique. The Spaniards, well in place, were quick to create danger: Olmo, launched by Pedri behind the Costa Rican defense, missed his cross shot against Navas (5e). First alert on the goal of Costa Rica. A few minutes later, Pedri serves Asensio again at the entrance to the opposing area, a shot that grazes the post of the Costa Rican goalkeeper (9th). Second alert.

The third opportunity is the right one: on a one-two with Gavi, Olmo comes into the Costa Rican area and beats Navas with a small, subtle dive (1-0, 12e). By the way, he writes the 100e Spain’s goal in a World Cup. Costa Rica struggled to exist during the start of the match, failing to project themselves into the Spanish half of the field. La Roja, on the contrary, masters his subject and logically scores a second goal: on a millimeter cross from Alba in the Costa Rican area, Asensio emerges to regain the ball with a flat cross-foot victorious (2-0, 21e).

Spain seems to be on the move for this first match in the World Cup-2022, while Costa Rica has been suffering the opposing game for half an hour. He ends up cracking again on this breakthrough from Alba and concedes a penalty converted by Torres (3-0, 31e). The match then took on the air of correction, and Costa Rica did not materialize with its free kick, a rare incursion into the Spanish surface (33e). Even when they try to build an action, the Costa Ricans fail to create danger in the opposing camp (39e). Spain, meanwhile, spin the ball around and manage their advantage at the end of that first half. Asensio is close to increasing the score before returning to the locker room, but he fails to frame his shot (45e+5).

A score that turns to correction

With a lead of three goals, the Spaniards are settled in an armchair for this second period. They are not resting on their laurels, however, like Asensio who fired a shot over the frame of Navas (48e). Torres’ low ball also sends a shiver through the Costa Rican defense (52e). And the opportunity that follows materializes: Torres dribbles in the opposing box, caught between two defenders he slips the ball under the belly of Navas (4-0, 54e).

The essentials are assured for La Roja, and Luis Enrique rotates his squad by replacing Torres and Pedri (57e) by Soler and Morata. Morata also wants to go for his goal, but his curling shot misses the frame of Navas (63e). The Spanish coach, always in a logic of preserving his vital forces, brings out Busquets and Alba for Koke and Balde (64e), then Asensio for Williams (69e). Costa Rica, helpless, suffers the scenario of the match, leaving the door open to new goals from his opponent.

As we enter the last twenty minutes of regulation time, the match seems already over: Spain have made their five substitutions, are four goals ahead and Costa Rica is not creating any chances, still suffering the possession game of his opponent of the day (84% possession for La Roja over more than an hour of play).

And what had to happen happened: Spain gives even more scope to the scoreboard on a breakthrough from Balde, then Morata shifts and crosses for Gavi who scores the fifth goal with an outside right foot which makes a re-entrant post (5-0, 74e). Morata misses scoring a sixth goal (81e) but was eventually flagged offside.

The last minutes of the match took place at a false pace, Spain took the opportunity to improve their possession (more than 87% at the end of the match)… and their goal average. On a center from Williams repelled by Navas, Soler appears in the axis and scores a sixth goal close to the post (6-0, 90e). Costa Rica is an absent subscriber. He even conceded a seventh goal in stride, this time after a victorious strike from Morata (7-0, 90e + 2). The referee finally whistles the end of the meeting, probably a release for Costa Rica.