Skating contest between Ayuso and Montero 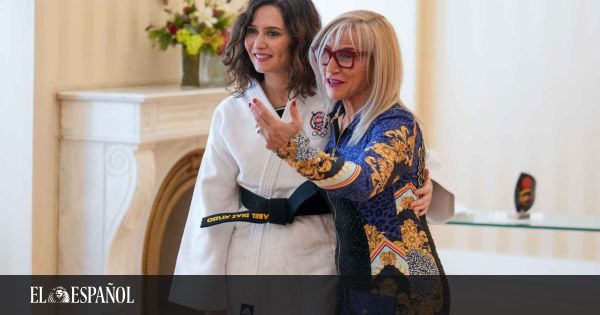 The parallels are always illuminating. These days, two powerful women are facing the consequences of their own decisions, which have led them to slip up, as the result of a conspiracy against them by malevolent agents. They do not stop placing themselves in the Hispanic tradition: see the treacherous charmers who for the good Alonso Quijano were always behind his setbacks and misfortunes.

The president of the Community of Madrid, Isabel Díaz Ayuso, receives the honorary black belt from the Madrid Judo Federation.

It is a setback, no matter how you look at it, that the legal reform that sought to strengthen the protection of women against crimes against their sexual freedom has as a consequence the reduction of sentences or even the release of convicted sex offenders. Could its maximum promoter, the minister Irene Montero, ask yourself to what extent the result is due to an improvable legislative technique, that is, to an error that your department should correct. But it’s quicker to pin the blame on a conspiracy of backward judges.

It is not a triumph, far from it, that the reorganization of extra-hospital emergencies, with the ostensible purpose of saving personnel and resources, leads to its collapse and a wave of mobilizations of enraged health workers and citizens. Nothing prevents its last responsible, the president Isabel Diaz Ayuso, meditate on the opportunity and success of the measure, in a post-pandemic context in which the sensitivity towards health issues is maximum. But, again, it is also less difficult to label all those mobilized as resentful communists.

Of course, the problems in today’s societies are always very complex and when something goes wrong it is not entirely impertinent to invoke any of all those factors that ultimately affect any mishap. It is true that criminal laws (especially when the Criminal Code is used as a kind of broad-spectrum antibiotic) raise interpretive questions that judges can and should resolve. It is also true that there is a general problem of lack of medical manpower (especially to fill low-paid positions) and that this lack complicates the management of health care.

However, it is no less true that well-written laws (for example, with adequate transitory provisions) raise fewer interpretative doubts, and more when it comes to a right such as favorable criminal retroactivity, which must also always be appreciated in the light from the beginning in doubt for the accused. And it also happens that the scarcity of any resource is usually better managed from the pact with those affected than from administrative despotism and nocturnal transfers.

Something must touch Montero and Ayuso because of the fire that both have in their living room, and some fire extinguisher, no matter how lazy or angry they feel, they will have to find. Persevering in the transfer of responsibility to abstract scarecrows does not seem like a path that leads anywhere, as a certain former tenant of the Moncloa palace liked to say so much.

Another question is whether this involuntary blundering contest is being faced by those who feel like its beneficiaries in the most appropriate and promising way for their interests. Those who are now merciless with the minister, or those who are delighted with the president’s misstep, believing that here is finally the opportunity to get off one and interrupt the flight of the other, perhaps they forget that at the moment of truth, politics has a purposeful dimension that should never be ignored.

Neither the Government is going to fall nor can Podemos be undone by this false step by the purple minister. And the Madrid left will do wrong to believe that this sanitary blunder will knock Ayuso down. The votes must be won, not wait for someone else to lose them.