Pierre Pineau in the top 10 in Brisbane…

The only Frenchman present this week in Brisbane for the launch of the 2022-23 season of the DP World Tour, Pierre Pineau (photo) signs an excellent 67 (-4) and offers himself 9th place in the tournament, two lengths behind a 100% Australian trio: Min Woo Lee, Jason Scrivener and John Lyras. Winner in 2020, Adam Scott is 4th at -5 (66). Winner of The Open at St Andrews, Cameron Smith, double winner of the tournament in 2018 and 2019, is in 14th place at -3 (68) along with Dane Nicolai Højgaard and Pole Adrian Meronk.

Finalists from Road to Mallorca (Challenge Tour) at the beginning of November in Majorca (Spain), Pierre Pineau is at the start of the first event of the 2022-23 season of DP World Tourco-sanctioned with the PGA Tour of Australasia. On the par 71 of Royal Queensland Golf Club de Brisbanehost of Fortinet Australian PGA Championshipthe Frenchman ideally launched his week.

Summoned from tee No. 10 at 12:00 local time (02:00 in France), he started with a bogey before quickly taking the measure of the route, first completing his first leg in 34 (-1) with three birdies for two bogeys before achieving a clear round on the return thanks to three new birdies including two on his last three holes (at 7 then at 9).

With a card of 67 (-4), the pupil of Guillaume Biaugeaud moved into the top 10, two points behind an all-Australian trio of Min Woo Lee12th you DP World Tour Championship last week in Dubai and 32nd in the last European ranking, Jason Scrivener102nd in this same European ranking, and John Lyrasmembre du PGA Tour of Australasia.

The course is very hard, the greens are concrete and there is quite a bit of wind.

« I’m super happy to be hereexplains the current 394th player in the world. The course is very hard, the greens are concrete and there is quite a bit of wind. I hit the ball fairly moderately, especially on the greens attacks but put a lot of putts and optimized on the par 5s. So I’m pretty happy with that score despite not having not taken a lot of greens. »

Winner in 2020, Adam Scott, 34th player in the world, one of the big favorites for victory, also made a success of his entry by posting a solid 66 (-5). Double winner of one of the flagship events of the Australian circuit (in 2018 and 2019), Cameron Smithrecent winner of the Claret Jug at St Andrews and since passed on the LIFE Golf pour the modest sum of 100 million dollarsalso launches his tournament perfectly with a serious 68 (-3) which already places him in ambush (14th).

Present in Dubai last week for the final of the 2021-22 season of the European Tour, the Pole Adrian Meronk (8th in the European ranking) is alongside Smith, just like the Dane Nicolai Højgaard and the Spanish Alfredo Garcia-Herediawho lost his full right to play at the end of the Portugal Masters.

He too is a defector on the LIV Golf, Marc Leishman appears in 26th position at -2 (69) with Rasmus Højgaard, 16th in the European rankingand the Spanish veteran, Alejandro Canizares62nd in the European Cards final in Tarragona… 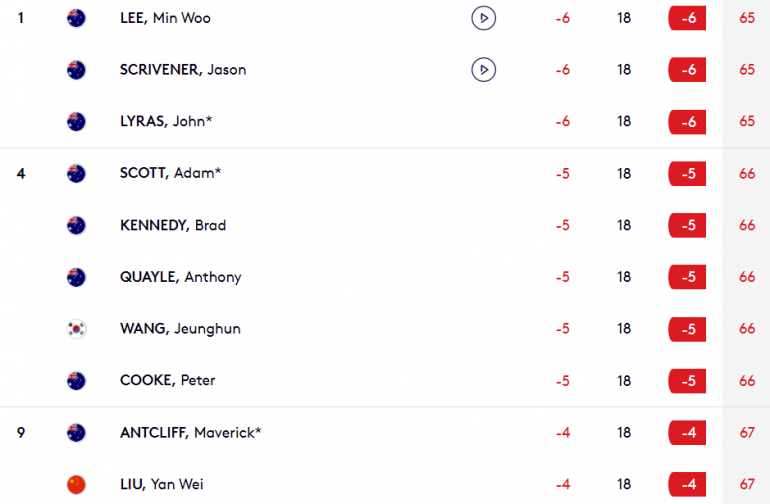