Jorge Martínez Aspar: “If there are two circuits that should not have alternation, they are Cheste and Jerez” 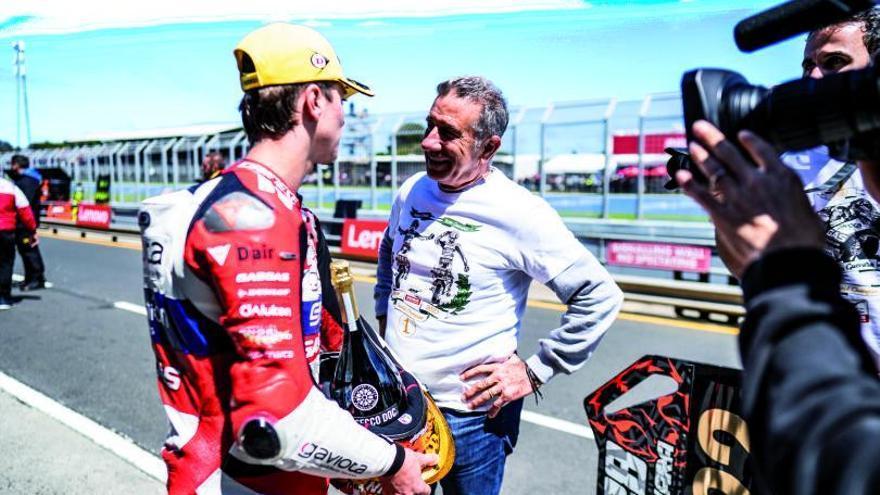 This season the Valencian pilots, in the absence of chest, add up to 26 podiums, which equals the figures of 1988 when you achieved the historic double by proclaiming yourself champion of 80cc and 125cc. What balance does it make?

It is very satisfying that, no less than 34 years later, the Valencians continue to be at the top, winning great prizes, and I am very happy that they equal a historical record from 1988, which is mine together with Miralles and Champi. This is undoubtedly the fault of the birth in 1999 of the Ricardo Tormo Circuit and the Cradle of Champions.

All that remains is Ortolá to get on the podium, to see if he does it in Cheste.

I wish!. I would love for Iván, because he is a boy that I bet on him five years ago when he was 12 years old, and it would be the final touch for a rider like him to be able to get a podium.

Has the icing of seeing a Valencian champion been missing?

I think it has been a spectacular year for Valencian motorcycling. It is a pity that a title is missing. Aron Canet is a talent and has beastly potential, he is having his best season in Moto2, but he has lacked a bit of consistency. And Sergio García Dols was the leader until the end of the season, too bad England fell, Sasak threw him out, and Italy fell, but it is his best season. Hopefully I can make the brooch with the runner-up in the world.

Has it been a great year for the Aspar Team?

A practically record year. We also had good years in 2006 with Bautista, Faubel, Gadea, 2007 with Talmacsi and Faubel, 2009 with Smith and Julián Simón. We have had very complete seasons, but in this one, being world champions with Izan, hopefully runners-up with Sergio, and also team and brand champions with GasGas is a brutal finishing touch.

At the Valencian level, it is true that the Circuit Ricardo Tormo helps, but now the Circuit de la Ribera, which it has just acquired, will also help.

There is no doubt, for me it is a brutal brooch. I made my debut in Guadassuar 43 years ago and now we can have the circuit in my name… I have a crazy desire to reform it and put everything in good condition. What is clear is that Valencia and Spain in the last 30 years have taken a step forward in the world championship. We have to keep reinventing ourselves so that others don’t copy us and don’t improve us.

Perhaps there is still a need to consolidate a Valencian pilot in MotoGPafter the attempt with Barberá and Lecuona?.

I wish a factory would arrive and sign a Valencian pilot. Barberá was competing. Arón is one of those who could make the leap. We were in MotoGP for 9 years, and it really is very difficult to be as a private team. We are in five structures, and if we went back to MotoGP, which I do not rule out, it would be solely and exclusively from the hand of a manufacturer. That would be very positive, but I repeat, only from the hand of a factory.

Is the Aspar Team worried about the alternation between Spanish circuits that Dorna promotes, because of what could affect Ricardo Tormo?

I hope there is no alternation, although I know that it is Dorna’s decision. But personally I think that if there are two circuits that should not have alternation, they are Jerez and Valencia, I think they are two circuits that have shown enormous potential at the level of fans, entertainment, and organization in all senses. The work that has been done at the Circuit Ricardo Tormo is brutal.

How is your relationship with Sergio García Dols now after everything that happened and that he lost his title options?

The relationship is very good and I wish him the best.

¿Albert Arenas leaves and leaves his place to Izan Guevara in Moto2, is the most outstanding change for next year. Is everything already closed?

The whole issue of pilots is closed, we are with GasGas closing some fringes of a project in the medium and long term as well

and with sponsors we have more than 80 percent closed.