J.6: Spar Girona stops being undefeated in Zaragoza while the classics take air at home 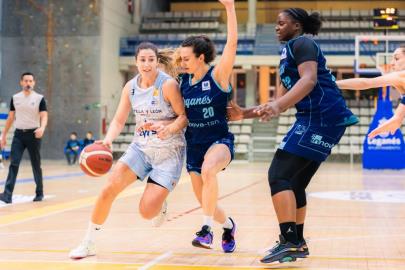 J.6: Spar Girona stops being undefeated in Zaragoza while the classics take air at home

It hasn’t been an easy start to the season for any of the classic teams in the competition, but Saturday night gave them some fresh air with their respective away wins. Starting with Perfumerías Avenida after a tough battle in Leganés, followed by Valencia Basket in a demanding match in Lugo and ending with Cadí La Seu on their visit to Tenerife. A few hours later, Spar Girona lost its undefeated status against Casademont Zaragoza, which reinforced its leadership with the support of 7,864 spectators.

A day of important victories for some of the classic teams in the competition who took the air away from home thanks to their solvency away from home. A Saturday night in which Perfumerías Avenida, Valencia Basket and Cadí La Seu breathed a little more relief and in which Lointek Gernika and Pajariel Bembibre took a step forward with the complicity of their fans.

PHOTOS: The best images of the day, in the Flickr FEB Gallery

It has not been an easy week for Perfumerías Avenida who, after their European victory, had to put on their work overalls again to recover the lost ground in the LF Endesa. A goal that the Salamancans were able to accomplish during their visit to Leganés, but it was far from easy given the competitive nature that Innova-tsn Leganés seems to have achieved. Because the girls from Madrid came to see themselves ahead on the scoreboard for a good number of minutes, putting their rival’s victory in serious danger. But once again, Maite Cazorla’s direction was decisive so that his team could turn the score around in the early stages of a fourth quarter in which a basket by Crvendakic a few seconds from the end was decisive (WATCH VIDEO). Avenida put the first at home in his locker and the team returned home with the feeling of having fulfilled their duty (78-85).

And if the meeting at Perfumerías Avenida was demanding, it was no less difficult for a Valencia Basket team that arrived in Lugo much reduced. Because the usual casualties of Cristina Ouviña, Alba Torrens and Rebecca Allen were joined at the last minute by a Raquel Carrera injured in the last training session. A complicated scenario that the taronjas knew how to weather with a good start to the match and with Queralt Casas adding and contributing in the different facets of the game. A key piece when it comes to containing the attacks of Blanca Millán and Paula Ginzo to be able to close in their favor a match in which they would still have to suffer a new setback. Specifically, with Leticia Romero’s injury on the last play of the game, having to receive medical attention on her left shoulder. The negative note of a night in which the young women were once again one of the differentiating factors.

For his part, Cadí La Seu returned home with an important oxygen balloon in his luggage after beating a Tenerife in the Canary Islands that did not quite hit the desired key. Because once they were behind on the scoreboard, it was difficult for Claudio García’s men to keep up with the game pace of a decisive Laura Peña from the Catalan side (46-67). A night that was not particularly productive for the island teams as SPAR Gran Canaria could not surprise either, in this case during their visit to the Lointek Gernika track. A duel in which the balance was already decided during the first period with a solid partial for Anna Montañana’s men and in which not even the infallible Sika Koné could prevent the victory from staying at home (80-62). In this way, both teams see a distance between Embutidos Pajariel Bembibre who balanced his balance of wins and losses (3-3) with a victory in his fiefdom against the always demanding Movistar Estudiantes. The always effective Roselis Silva was in charge of it, who was key so that the local fans could celebrate the victory together with their team (67-61).

Already on Sunday morning, the competition experienced the great meeting of the day with the court of Prince Felipe as the protagonist. A stage in which a total of 7,864 spectators gathered to see how their Casademont Zaragoza achieved the most difficult yet, a prestigious victory, without the captain Vega Gimeno (low due to injury) and with which to stay one more week in the most table top. Because those of Carlos Cantero were imposed on a Spar Girona undefeated to date and that lost its condition in a duel marked by equality. All this thanks to the drive of an impeccable Fiebich throughout a game in which the direction of Laia Flores or the solidity of Marianna Tolo under the hoops was not enough. Especially in the last stages in which the Girona team was imprecise in passing (61-60).

Minutes before, the local plenary had begun to cook from Barcelona where Barça CBS did not fail in front of their fans. In the case of the Catalans, coming back from a game in which Kutxabank Araski had 13 goals at halftime and in which Carolina Guerrero forced an extension that Diarrá could not avoid by missing two free throws. In this way, the winning inertia allied itself with those of Isaac López to be able to emerge victorious, taking a new step forward towards permanence. For its part, the IDK Euskotren once again offered one of its most solid versions, driven by Natalia Rodríguez at the beginning and supported by Joy Adams during the rest of the match. All this in order to prevail over a Hozono Global Jairis who, hand in hand with the fireproof Erika de Souza, fought for victory until the end (84-73).