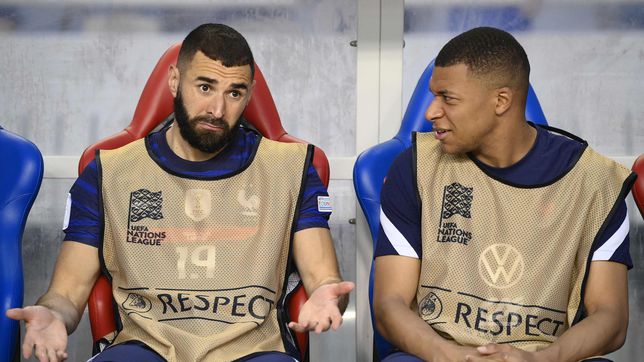 From heaven to hell. That is the journey that Benzema has been on in just a few months in which he has gone from being the hero of Real Madrid who won the double (League and Champions), and for this reason to lift the Ballon d’Or at the age of 34, to suffer one of the biggest setbacks of his sports career: being left without what could well have been the last World Cup of his career due to injury. The Madrid staff has already been put on guard to cover their star. Contact with Benzema is permanent since the tests carried out on the player at the Aspetar clinic in Doha determined that he suffers a quadriceps injury in his left leg that will keep him out for three months. The player returned to Madrid on a private flight on Sunday morning and misfortune is already chewing at home.

Ancelotti has spoken with the player by phone to find out first-hand his state of mind and has told him that the most important thing now is for him to rest and recompose himself mentally. There is still no date indicated for his return to work. Non-World Cup players must be under the command of the Italian coach on December 1. Benzema is a special case. After what happened, the Frenchman is facing a great acid test for him. Madrid needs the best Benzema for the remainder of the season, with five titles still at stake (League, Champions, Spanish Super Cup, Mundialito and Cup) and the open sextet.

At the club level there is another pending issue with Benzema and that is his renewal. On the part of the entity there will be no problem for Benzema to continue for another year, at least, wearing the Madrid shirt. Contrary to what happened with Modric, there is no clause in his current contract that guarantees him another year for having won the Ballon d’Or and he must negotiate. At the club it is understood that this series of injuries is just a matter of bad luck and that the best Benzema should last several seasons.

A via crucis since September.

But the truth is that Benzema has experienced a true ordeal since he was injured in the Champions League match against him Celtic on September 6. He left the field with his hand on the back of his right knee. The official medical report revealed that there was an injury to the semitendinosus muscle, one of the three that make up the hamstrings, and that there was also an overload in the quadriceps of the same leg, the right.

Since that date, Benzema has stopped playing for Madrid nine games out of the next 15 that the team played. He played the 90 minutes against Osasuna and Shakhtar before resting against Getafe. He played three other games (Warsaw, Clásico and Elche) and disappeared again, this time to only play 27 minutes (against Celtic at the Bernabéu) in the last six games for the white team before the break. For this last absence there was another official medical part issued on October 22: “Muscular fatigue has been detected in the quadriceps of the left leg.” Exactly the same area where he was injured in Sunday’s session with France.

Benzema has only been able to play 50% of the minutes with Madrid so far this season (955 of 1,850), and although there is concern at the club, the alarms have not yet gone off since nothing has changed in the extreme care that Benzema makes of his body and his diet. The club’s medical team attributes it, in any case, to the emotional stress that Benzema may have suffered feeling on the wire facing the World Cup due to these injuries so close in time. As Karim said after lifting the Ballon d’Or, The most difficult moment of his career was when he was removed from the national team due to the Valbuena case: “I saw myself alone, training in Valdebebas, when the others were playing with their countries.” This World Cup meant a lot to him.

Benzema has already missed 9 games out of 21 this season with Madrid. More than in all of last season, in which he could not play only 7 of 53 (he scored 44 goals). In the previous one, 6 of 52 were lost and in the previous one, 2019-20, only one of 49. Now begins the great acid test for the forward: to show that he is still the player who leads the project and that he can be, at least one more season.