Don’t play the World Cup, but deliver packages: ‘How much bad luck can you have?’ 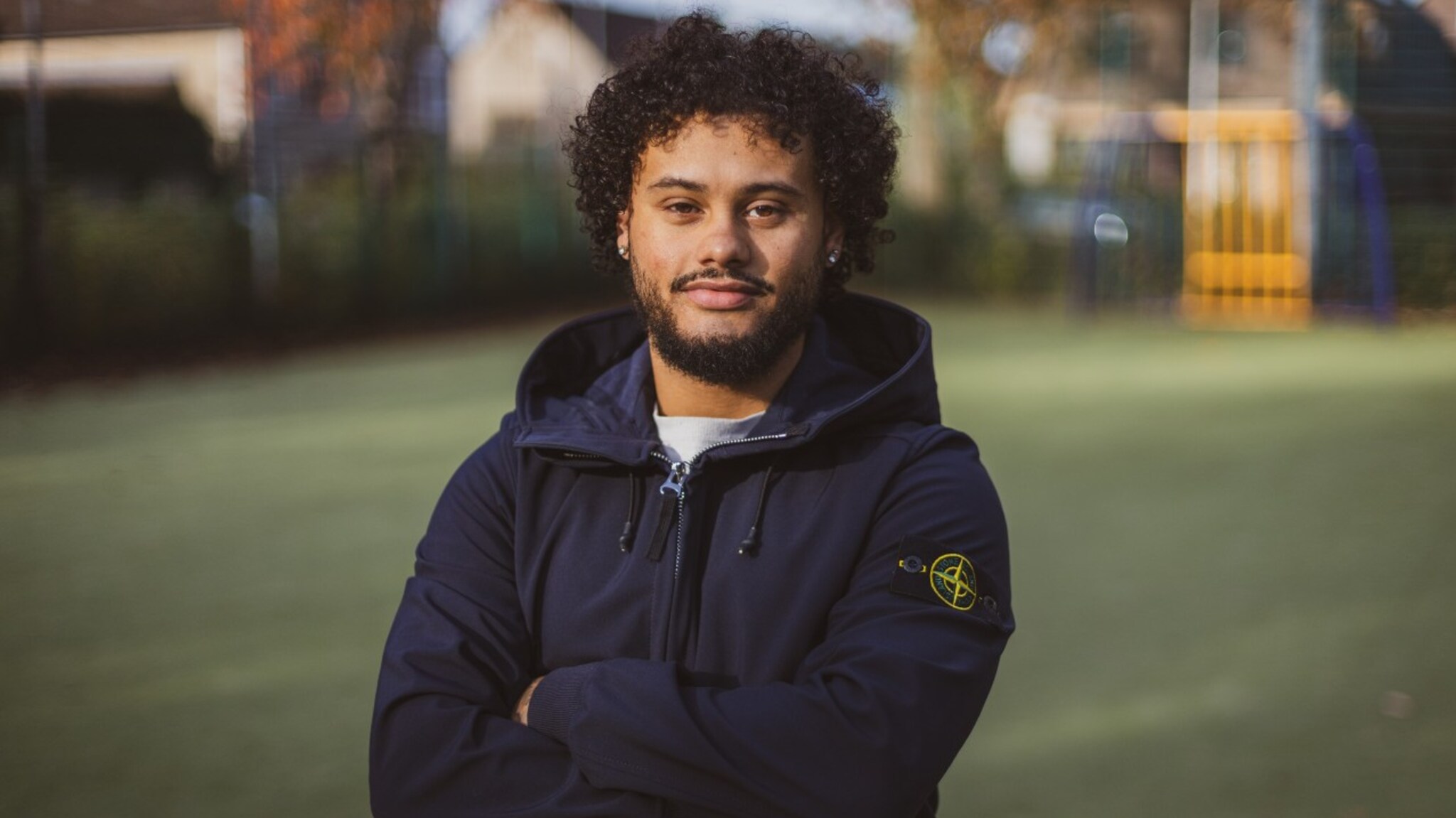 May 21, 2014. The Wilhelmus sounds just before the final of the European Football Championship under 17 years. Shivers all over his body. Wellington Verloo proudly wears the orange shirt. Very proud. Playing such a grand final for your country, he didn’t even dare to dream of it. The Dutch, with Wellington in the base, lose the final to England. After penalty kicks. That’s a disappointment.

But now, more than eight years later, the moment that the French former top footballer Michel Platini hangs the silver medal around his neck is still the highlight of his football career. And it will stay that way, because Wellington (now 25 years old) no longer plays football. Never again.

How else could it have turned out.

Wellington was born in 1997 in the slums of the Brazilian city of Recife. His parents could not take care of him. At the age of five he was on a plane to the Netherlands with his little brother Washington. “I can’t really remember anything from that time,” says Wellington. “Only from the moment I was on the plane did I know everything.”

He wants to know who his natural parents are and what he has taken from them. Wellington has none of them, no photos or other leads. He wants to look for them. “I’m talking about it more and more. You’re always missing something.”

Wellington and his brother ended up in a terraced house in Bennekom in Gelderland. He now tells his story in the same house. He had a happy childhood with his adoptive parents, he says. “Although I wasn’t the easiest. I didn’t listen, I was stubborn, and I didn’t like school.”

Wellington only wanted one thing: to play football. After school on the football field in the neighborhood with friends. Every day. “When the lampposts came on, I had to go home, but I never actually did.”

“I was just happy when I played football, on the football field or at the club, it didn’t matter.”

Wellington and his little brother Washington—it soon became Welly and Washy—were the only black boys in town. On the fields of VV Bennekom, Welly stood out for his talent. Although he didn’t really notice it himself. Want to become a professional football player? Or play in Orange, which many boys and girls dream of? He didn’t think about that at all at the time. “I was just happy when I played football, on the football field or at the club, it didn’t matter. As long as I could play.”

Even when professional club Vitesse came forward, it had not occurred to him that he would ever be able to earn his money playing football. “Nice man.” That was it. Nice to be able to play football at Vitesse, against big clubs such as PSV and Ajax.

Also because he was small, he was not immediately the star player. That came when he was a little older. First as an attacker, but later in midfield and in defense. “Actually, I was pretty good everywhere,” he says with a big smile. When he thinks back to that beautiful carefree time, he becomes happy. He was taken out of school earlier to train at Vitesse. “My friends in Bennekom were really proud of me.” Friends with whom he still played football every free hour on the football field.

Wellington was there. That was ‘horrible’, he recalls. “I remember everything. We were so good, we could have won the tournament,” he says convinced.

At Vitesse he was against the first team at the age of 18, foreign clubs wanted him and kept a close eye on him. Nothing seemed to stand in the way of a future as a professional football player. Almost nothing.

The first time it went wrong.

He remembers it exactly. As if it happened yesterday, he describes how he tore his right cruciate ligament. It was during a practice game. Rubbing his knees with his hands – as if to make them better – he tells of that moment: “The ball was blocked by an opposing player and flew up. I was facing the ball that went over me . I turned around and wanted to take the ball, but while turning I felt pain. A lot of pain. I cried out.”

By one wrong move. He had to have surgery and a year of rehabilitation. Just when his real breakthrough was near. It even became eighteen months, because he fell again on crutches and had to be operated on again. He swallows, waits a few seconds and says, “It sucks man. You see your teammates outside playing soccer and you’re inside doing strength training.”

But Wellington is a go-getter. Not for a second did he think about stopping. Not being able to play football drove him crazy. “I was not immediately afraid of my future, but I just wanted to play football. At the highest level, I was so close. That gave me the strength to continue.” There was nothing but football in his life.

That’s why it was ‘very nice’ when he could and was allowed again. First training and then the first real match at Vitesse. “I was overjoyed.”

But then. The second time it went wrong.

The unbelievable happened in that match. Wellington tore the cruciate ligaments in his other knee. “The same feeling as the first time. My good knee got swollen and I knew enough. My world came crashing down. Again. I cried out: how can this be?”

He got no answer to that question. Disbelief at his team, his family. Nobody got it. No, no weak knees, just bad luck. Very bad luck, he whispers.

Rehabilitate again. That long road again. Again so long without his love football. But also the same positive attitude. “I wanted to come back again. It couldn’t be that it stopped here.” This time it was twelve long months of rehabilitation. Vitesse also kept faith in him and extended his contract.

Another fresh start. With fear, yes. “Fortunately I was still able to play football and I had confidence, but unconsciously you are a bit more careful. You don’t want it to happen again.”

The boys with whom he played football before had not stood still. And fit guys had been added, also for the position in which Wellington played.

He had to fight for his spot. In a practice match where he got the chance to show himself, it was again the cruciate ligaments of his left knee that burst. pats. What else can you say? “The doctors assured me even after this time that I don’t have bad knees. It was just bad luck again. Really bad luck.” The same disbelief.

The same story. But this time Vitesse did not extend his contract. “Logical. It was a risk to continue with me.” Wellington himself began to have doubts. “Thought it just wasn’t supposed to be.” His parents’ support persuaded him to try one more time.

He was able to rehabilitate and train at the KNVB in Zeist, together with other boys without a club. The Dutch national team also trained there. He met Memphis Depay, Steven Bergwijn, Frenkie de Jong, the boys with whom he previously played in the Orange squad. They asked what he was doing there. Wellington explained. “They said they really thought it was a shame. Also a lot of disbelief.”

The ambition to ever play with them in the big Orange was gone. Wellington would be happy if he could still play at a level. He went on trial with the Canadian professional club Toronto FC. They were happy, but Wellington suffered a minor injury there. Little going on. “I went to the Netherlands to be treated. A day before I was to fly back to Canada, the lockdown started because of corona.” Wellington had nowhere to go.

The strict lockdown lasted longer in Canada than in the Netherlands. Now that he was finally injury-free, he also wanted to play. He was able to go to Gibraltar, trained with it for a few days, but turned down an offer. “The level was really too low and I would hardly earn anything. It was just too much for me. I had to live on it.”

The fourth time. The final blow.

He eventually ended up at amateur club IJsselmeervogels, where he could train for a week. That went well. “They said after three days that I probably got a contract.” On the day he was going to sign it, disaster struck during training. His cruciate ligaments tore for the fourth time.

Unimaginable. Finished. Even for go-getter Wellington, this meant the end of practice. His cheerful voice suddenly sounds more gloomy. “I had a scan done, hoped for a miracle.” But the miracle did not come. It was ‘shit’ for the umpteenth time. He was numb, couldn’t even be sad or angry anymore. He didn’t want any more surgery. It was no use.

He still occasionally feels pain, for example when he has to stand for a long time or when he makes an unexpected movement. But it hurts much more that he will never play football again, not even on the football field where his friends still play in the evenings. He’s not coming back, can’t stand it. “I hated my knees,” he says, adding: “But I’ve accepted it. There are people who have much worse things.”

A new life, without football. That is difficult for Wellington. “I’m looking,” he says. He has not completed an education, everything had to make way for football. He does various jobs to earn his money. At the moment he delivers postal packages, on demand. “Temporarily, I don’t want to do this all the time.”

How else could it have turned out.

“When I look at the World Cup later, I will sometimes think that I could have been there.” Still, he wants to see as many matches as possible. “Because I love football. And I miss it, man. I really miss it.”