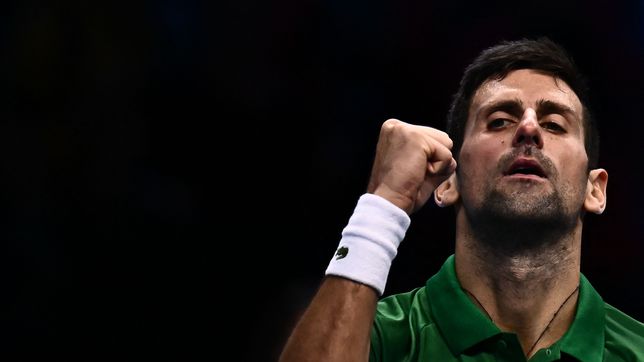 Novak Djokovic and Daniil Medvedev staged this Thursday at the ATP Finalswith victory for the Serbian (6-3, 6-7 (5) and 7-6 (2)) despite the bird that came over him in the second set, the story of two tennis players that since they met in the final of the US Open last year they have led opposite trajectories. That defeat hurt the Serb and then, due to his refusal to get vaccinated, not only the start, but practically the entire current season, became very complicated. But he managed to be champion on clay (Rome), grass (Wimbledon) and hard court (Tel Aviv and Astana). And now he is the main favorite to win the Masters Cup. He showed it by winning the longest game so far in the tournament (3h11), despite the fact that nothing was at stake for the classification.

Medvedev, for his part, left New York with great confidence, but losing the Australian Open final against Rafa Nadal when he had a two-set lead, took it away with a stroke of the pen, and his campaign, despite the fact that he lifted trophies in Los Cabos and Vienna, has left something to be desired. Winner in 2020 and finalist in 2021, he leaves Turin this year without winning a game, as happened in his first participation in 2019. His balance in the course is positive (45-19), but more was expected, especially in the rest of the Grand Slams. “What happened? It’s simple, in those moments I sucked. A horrible disaster. Luckily in this case it was worthless, ”he lamented.

Djokovic was already first in the Red Group, which was expected to be fierce and then it was not so fierce. But he took the game with tremendous seriousness, as if it were a final., so as not to forgive Medvedev, a staunch enemy, for the 200 points and 370,000 euros that were at stake, spurred on by the possibility of going to the semifinals undefeated. It is the third time in a row that he has beaten him since that duel in New York. After running off to the locker room for a contact lens change, At the most critical moment he faced in the second set, he saved three set points from the Russian with a serve and volley, an ace and a forehand after a hard and lengthy exchange. He could not with the fourth, in the tiebreaker, and sat down with signs of exhaustion, to the point of shaking his hands when he brought the towel to his face. “I was not feeling very well physically in the third set, I suffered a lot (“It was just fatigue, there is no illness”, he clarified later). I am very proud to have found the last bit of energy and the concentration necessary to return to the match”, explained the man from Belgrade.

She could have withdrawn, but she continued and the third sleeve saved her by gobbling all kinds of liquids, pills and vitamin supplements; thanks to the serve, which has worked wonderfully for him all week; and despite the big mistakes he made in the eternal ninth game, which cost him a break. Because, immediately afterwards, he billed an impeccable rest turn, helped by a double fault from Medvedev. The victory closed it with a magnificent drive and a scream. “I didn’t think about withdrawing, because I don’t know the rules and I didn’t know if I could play the semifinals if I withdrew. I didn’t even think about it, to be honest, because this match against one of my biggest rivals is really important, regardless of whether I’ve already qualified.” If he continued like this until he lifted the trophy, he would win the biggest prize in tennis history: 4,500,000 euros. On Saturday (2:00 p.m., Sports on M+) the Balkan will play for the 11th time the penultimate round of the tournament against Taylor Fritz, still five away from Roger Federer’s record (16).