Atlético Bucaramanga: Armando ‘Piripi’ Osma is not going anymore? What is known about the technician’s departure | Colombian Soccer | Betplay League 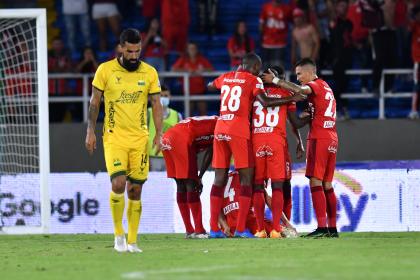 This Sunday, Atlético Bucaramanga fell in his yard at the hands of Junior, in key duel for a place in the eight. Luis ‘Cariaco’ González’s goal caused the second loss in a row for the urgent leopard, who cannot give up any more ground if he wants to get into the semi-final homers.

That last fall left them reeling, in 13th place with 21 points, and Armando ‘Piripi’ Osma would be the new “headless” coach in the Betplay League.

A sector of the press assures that Osma will not continue at the helm of Bucaramanga and that they are even looking for a replacement for him. Four games remain for the Santander team: Equidad, Medellín, Patriotas and Pereira. Four finals that, if won, would install them among the eight, since they will fight with direct rivals in the classification.

The journalist Pilar Velásquez, from ESPN, assured on Twitter that ‘Piripi’ Osma “It doesn’t go anymore in Atlético Bucaramanga“And he even mentioned that the Venezuelan Richard Páez, a technician with a past in Millionaires, was an option to replace him. “They spoke with Richard Páez but it is complicated about documents“.

On the other hand, the journalist from Win Sports, Alexis Rodríguez, mentioned that “Osma’s hours are numbered in Bucaramanga. At this time, termination of the contract is being negotiated with the directors. The club is already analyzing options for a new DT“.

Diego Rueda, director of Caracol Radio’s Vbar, also assured that Harold Rivera is another of the candidates.

In the post-match press conference, the coach mentioned that Bucaramanga has 12 points left, which if added would put them in the semifinal phase. “We played a great football game and lost due to two unforced errors by two players who have given everything for the team. In the first half, Bucaramanga was much more than Junior (…) I am positive and optimistic, I think 12 out of 12 “.

🚨 Piripi is no longer in @ABucaramanga. Contract cancellation. They spoke with Richard Páez but it is complicated about documents.

At this time, termination of the contract is being negotiated with the AB directives

The club is already analyzing options for a new DT

Rare…. They fired the “piripi” Osma from Bucaramanga… Incredible, what did the owner think? That he was going to be champion this semester? Please… There he is still in the fight, that is what Bucaramanga aspires to, to enter home runs…

A few games before the end of the season and with the latent possibility of entering the Copa Sudamericana, it would be an impulsive act to fire Armando Osma from Bucaramanga. The appropriate thing would be that they leave it for these last games.