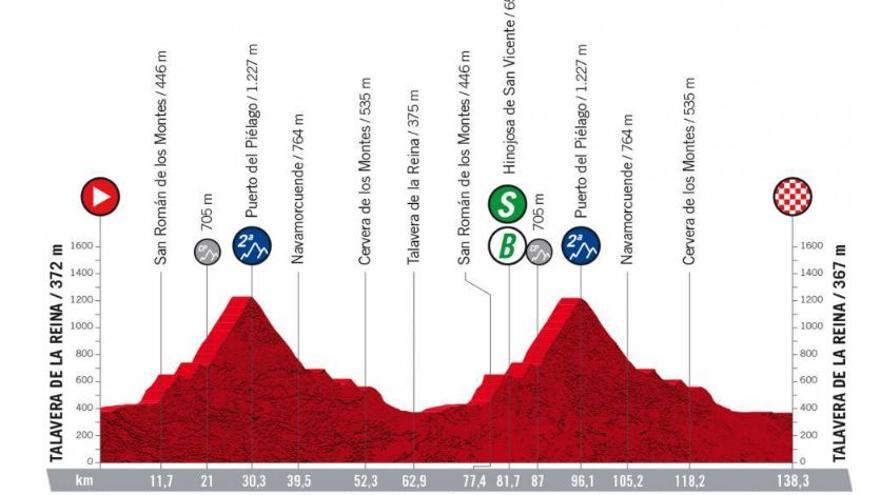 This Thursday’s stage of the Vuelta 2022, the nineteenth, with departure and arrival in Talavera de la Reina (138.3 kms.), It is a day with a high of Second that is climbed twice, the Puerto de Piélago, which will surely encourage a getaway and, if there is strength and ambition, it could also be an ambush against the leader Remco Evenepoel or the runners who escort him on the podium, Enric Mas and Juan Ayuso.

However, the Puerto de Piélago (9.3 kilometers at a 5.6 percent slope up to 1,227 meters of altitude) ascends very far from the goalthe first time at km.30 and the second at 96.1, so the attempt should be very far.

In fact, the stage is a circuit with beginning and end in Talavera, through which it passes three times, which is traversed twice. A route that what runners fear most is how short it is and the consequences that a mistake can have. “As someone takes a wrong step …”, warned Carlos Verona (Movistar)

The technical director of the race, Fernando Escartín, believes that it is “an interesting tour, short, but misleading”. A total of 138 km. about a “a circuit with two passages through the Puerto del Piélago that will force the escape to grit its teeth if it wants to prosper”.

Escartin believes that “Runners with good top speed who pass the mid-mountain well will have many options to win” to the sprint. That, if given, is not expected from too many units.