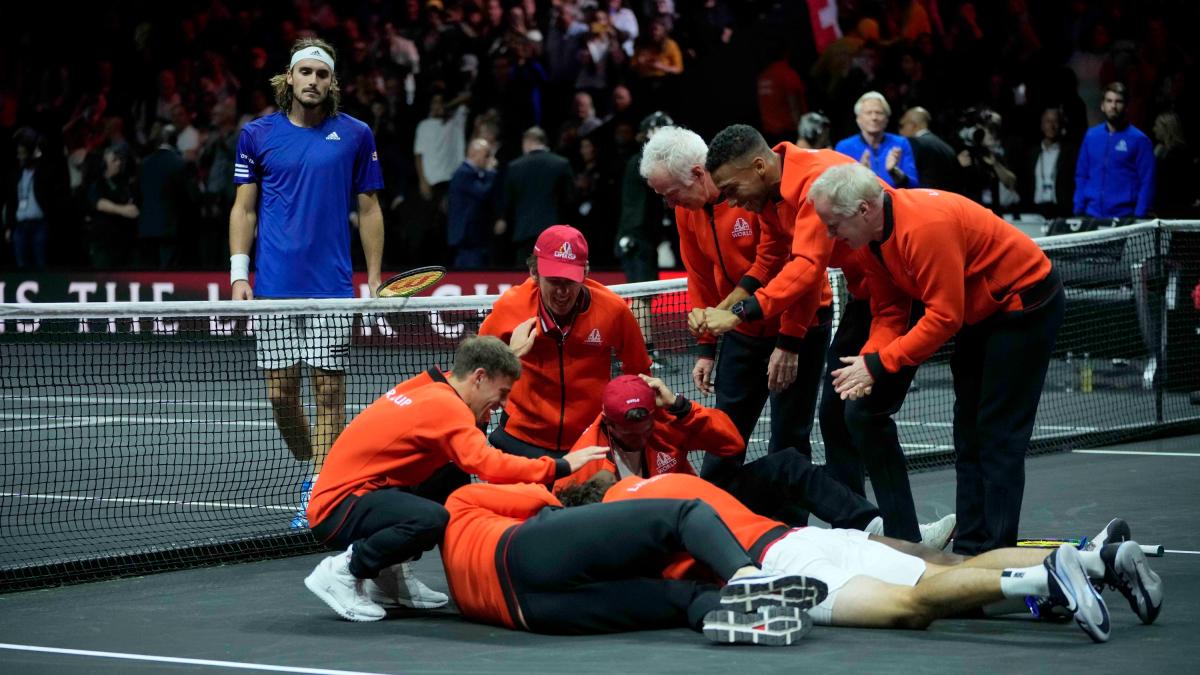 Ironically, when Federer left, Europe lost the Laver Cup for the first time

Team Europe won the first four editions of the Laver Cup. Despite the deficit until Sunday, the world selection was surprisingly able to prevail this time, of all things when saying goodbye to superstar and initiator Roger Federer, who outshined everything until the end.

The pictures of the two crying superstars Roger Federer and Rafael Nadal touched tennis fans all over the world. After Federer’s last official match, the 41-year-old Swiss and his long-time rival and current friend Nadal (36) sat next to each other on the bench and let their tears flow freely. While the English singer Ellie Goulding sang in honor of Federer in the arena in London, the two exceptional athletes in the industry could no longer hide their feelings.

It was one of the many emotional highlights of a farewell gala full of emotions and feelings for the Swiss tennis legend. At 0.25 a.m. local time on Saturday night, one of the greatest sports careers came to an end. With tears in his eyes, Federer said goodbye to tennis in London. After more than 100 tournament wins and a total of 20 Grand Slam titles, the Swiss maestro ended his impressive career.

“It felt like a celebration and that was exactly what I wanted,” said Federer in the subsequent interview on the pitch. Again and again he had to interrupt the conversation with the American ex-professional Jim Courier because he had to cry. “It was a perfect trip. I would do it all over again,” said the longtime number one in the world. “I’m happy, not sad.”

On Saturday and Sunday, Federer then slipped into the role of the spectator. In the blue tracksuit, he stood behind the players’ bench with his colleagues from Team Europe and acted as tipster and supporter. But even in this role, Federer continued to be the center of attention. Again and again the Swiss was displayed on the video cube. Again and again there was thunderous applause when Federer was in the picture. The celebrated smiled and waved to the audience. Tears stopped flowing.

Not even when the American Frances Tiafoe made the triumph of the world selection perfect with a 1: 6, 7: 6 (13:11), 10: 8 in the tiebreak match against the Greek Stefanos Tsitsipas. Captain John McEnroe’s team won the Laver Cup for the first time ever. Tsitsipas missed four match points in the second set. The previous four editions of the team competition had each been decided by the European selection.

The Europeans started the final day with an 8:4 lead, but were unable to win a game on Sunday. Among other things, Serbian Novak Djokovic surprisingly lost 3: 6, 6: 7 (3: 7) to Felix Auger-Aliassime from Canada. On the final day of the team competition, three points were awarded for each win.

Even after his farewell performance, Federer fought bravely for a long time. But when he was asked about his wife Mirka and his four children, it finally happened to the 41-year-old Swiss. Federer cried bitterly and couldn’t speak at first. Then he said to his wife in a halting voice. “I would never have gotten this far without you. You allowed me to keep going.” A long and heartfelt hug followed with Mirka, Federer’s daughters had tears in their eyes. More feelings than in these moments were not possible. “It was one of the most beautiful moments I’ve ever been through in my life,” said Novak Djokovic.

Federer quickly checked that Federer was denied a win in his last official match. “I will remember the looks on all the people’s faces and their emotions,” said Federer, “not the game, which was kind of weird.” At Nadal’s side, Federer had to admit defeat to the US duo Jack Sock and Frances Tiafoe in the tie-break match 6: 4, 6: 7 (2: 7), 9:11 and the score was 9: 8 in the last set even awarded a match point.

In mid-September, Federer announced that he would end his career after the Laver Cup, which he also helped to launch. The longtime number one in the world had to have a total of three knee operations. He played his last game on the ATP tour at Wimbledon over a year ago. The Laver Cup pits a European team against a selection of players from the rest of the world from Friday to Sunday.

At his last appearance, Federer flashed his exceptional talent again and again. The duo Federer/Nadal, who have won 42 titles at Grand Slam tournaments together, delighted the audience who had traveled from all over the world. Celebrities like Rod Laver, Alexander Zverev and Bastian Schweinsteiger came to London to see Federer play again. “It wasn’t easy to trade all the things that day,” Nadal said emotionally. “When Roger leaves the tour, a large part of my life also goes,” said the Spaniard, who came to London especially for the final chord with Federer before flying back to his pregnant wife on Saturday.