Second division: After jumping to the top, Heidenheim’s coach angrily stomps to the Düsseldorf bank 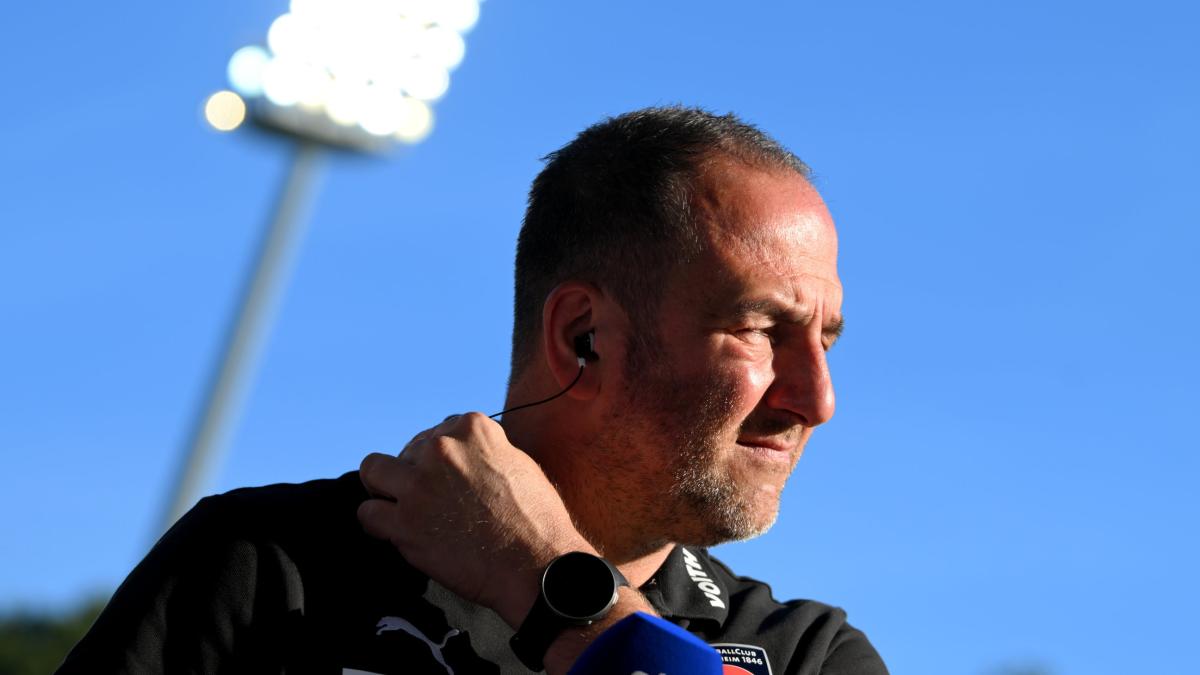 After jumping to the top, Heidenheim’s coach angrily stomps to the Düsseldorf bank

Heidenheim is the new leader in the second division. In the top game against Dusseldorf, a lucky victory was achieved. However, coach Frank Schmidt did not feel like celebrating. Nuremberg is deep in the crisis, which lost a half-time lead at the bottom of the table.

NAfter the final whistle there was initially no room for celebration. Frank Schmidt had just completed the victory in the top game of the second division with 1. FC Heidenheim and at least temporarily took the lead in the table.

But the coach still had something to clarify with the opponent. So the coach trudged with a determined look to the Düsseldorf bank and buttoned up the manager. Schmidt addressed clear words, vented his anger before he entered into a dialogue with Fortuna head coach Daniel Thoune and the matter was resolved after a few minutes.

It was initially unclear what it was about, and the FCH coach did not have any reason for negative moods after an overall happy success. His attacker Tim Kleindienst had turned the game upside down late in the chasing duel (87th).

In an intense game, Heidenheim took the lead through Adrian Beck (22′) before Dawid Kownacki made it 1-1 in the 59th minute. Dusseldorf put pressure on. But the goal fell for the FCH.

Kownacki missed the early lead for the guests after 15 minutes. Things went better for Beck on the other side. After a header from Kleindienst, he steered the ball over the line.

After the change of sides, the midfielder remained the most conspicuous Heidenheimer. But once he failed on the crossbar (56th) and only two minutes later Fortuna goalkeeper Florian Kastenmeier stood in the way of the 2-0. So Düsseldorf could continue to hope for a point – especially after Kownacki’s equalizer. Fortuna was more active in the final phase, but Kleindienst took advantage of one of the few chances and secured FCH’s fourth win of the season.

1. FC Nürnberg has to look at the other end of the table. The club hit a temporary low on Friday. After the next heavy defeat with 2:4 (2:2) at the previously winless promoted Eintracht Braunschweig, the promotion places are far away. The traveling fans articulated their displeasure after the final whistle.

The injury-plagued team even gambled away a two-time lead through midfielder Jens Castrop (10th minute) and striker Kwadwo Duah (29th). “We can’t get our foot on the ground after the break. Four goals conceded are amazing,” commented midfielder Lino Temepelmann.

Robert Klauß’s team just can’t find consistency and only sporadically use their potential. Head coach Klauß and his players inevitably find themselves in need of explanation after just seven points from seven games. “We failed as a team. You can’t win a second division game like that,” said goalkeeper Christian Mathenia.

The 17,173 spectators at Eintracht Stadium witnessed an amazing game. The hosts initially ran helplessly after the ball and opponents before they finally deservedly won, led by double goal scorer Fabio Kaufmann (13./61.). Anthony Ujah (44th) and Immanuel Pherai (59th) with a long-range shot scored the other Eintracht goals. “It’s hard to find an explanation for what happened, Mathenia said. “I’ve had a bad day too. In the second half we missed getting second division football on the plate. We were no longer there. These things happen to us on a regular basis.”

Initially, Nuremberg had clearly determined the game. They were superior in midfield. Young Castrop’s first professional goal and attacker Duah’s third goal of the season were the logical consequence. Defensively, however, the “club” lacked any stability.

Goalkeeper Mathenia looked bad at Kaufmann’s first goal from an acute angle into the near corner, and he was also unlucky with the second. After the double strike to 2: 4 after the break, the rearing up was unsuccessful. Tempelmann hit the crossbar (79th).