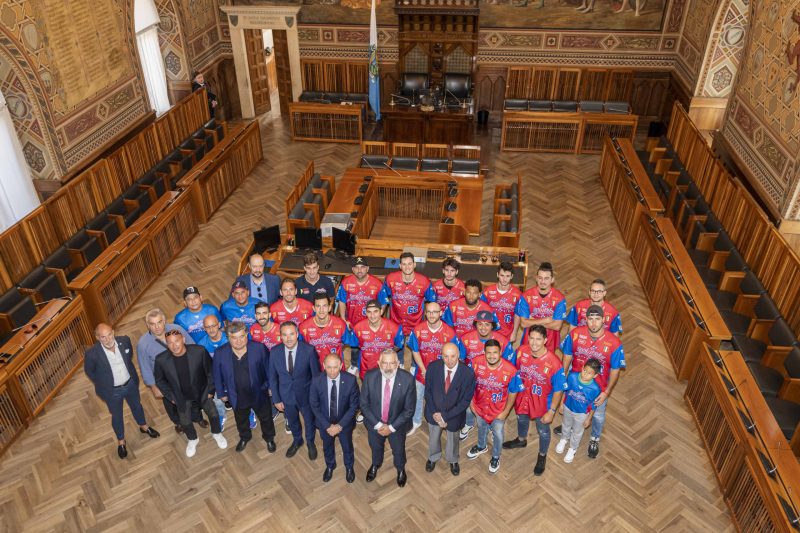 An honor and a pleasure. Day of great prestige, today for the San Marino Baseball. Management, technical staff and players were in fact received at the Palazzo Pubblico by Excellent Captains Regent of the Republic of San Marino, Oscar Mina and Paolo Rondelliand from State Secretary for Sport, Teodoro Lonfernini.

For the club a moment of reflection and joy that comes to crown a fantastic year that will have its epilogue next weekend with the Italian Cup.

This is the speech given in the boardroom by our President, Mauro Fiorini. “As always, today there is great emotion and pride to be received by the Heads of State in the Public Palace of our Republic, to celebrate the 6th success of San Marino Baseball in the Italian top league, the second consecutive after that of 2021, which once again it has brought great satisfaction to our country.

This is, in my opinion, the worthy conclusion of the 2022 competitive season, which was less complicated due to the pandemic, but which still imposed containment measures that we have gladly addressed, in full compliance with the indications of the government, health and athletes, aware that the role of a top team also includes an example function for their practicing sportsmen, especially for the younger ones. Speaking of young people, I point out that for some years the fruits of our nursery have been increasingly deserving entry into the first team, and I am particularly proud to remember that the very young Alessandro Ercolani is continuing his experience with an American team, and is playing in the United States, which is the nation where baseball is at the highest level in the world. The merit is undoubtedly to be ascribed to our highly qualified technicians, who manage many children and young people, fielding various youth teams of every age group each year that often achieve important results in the championships and tournaments in which they participate.

However, in order to better develop youth activity, it is necessary to overcome the lack of a dedicated field, which could also be used for women’s softball. Unfortunately, and I say this in full respect of the institutions, also in 2022 an instance of Arengo was rejected which could have represented an important step in this direction. However, we can reaffirm that San Marino is an increasingly consolidated reality in the world of Italian and European baseball, confirmed by the victories in the top national championship achieved in 2008, 2011, 2012, 2013, 2021 and 2022 (in addition to the finals reached in 2005, 2009, 2017, 2019 and 2020, the 2006, 2011, 2014 Champions League and the 2006 and 2009 Italian Cup).

We must strive every day to maintain this position, even if the economic contingency continues to be always difficult, today it is essential to involve the San Marino economic reality to help us continue to represent one of the San Marino excellences, with constant visibility even outside our borders. In fact, all of the above would not have been possible without the financial contribution of our sponsors, to whom a big thank you goes. The logistical and organizational contribution of the San Marino Baseball-Softball Federation, the Olympic Committee and the Secretariat of State for Sport should also be noted. who always support us with enthusiasm and without which all this could not have come true. As I approach the end, I want to thank the players, proudly highlighting the award of best player of the Italian Baseball Series that our Gabriel Lino has achieved, the technicians, managers and volunteers who have collaborated in all phases of the championship, each competing for the their part in creating a winning group appreciated by all, and that it is our commitment and duty to continue to maintain at this high level.

These results have come thanks to the foresight of Alberto Antolini who has been the promoter and protagonist of the new course of our team since the first championship and the support of his companies, also present in the Republic. The hope is that together with entrepreneurs such as Antolini, other new companies in our economic fabric will be able to support this Sport project which we believe, without false modesty, has brought and is bringing prestige to our country, as demonstrated by the space that televisions, websites and Italian national newspapers have dedicated us again in these days. This difficulty in finding financial support is unfortunately an increasingly topical issue and which is causing us serious concern. I do not want to bore their Excellencies with this subject, but I know that our Captains Regent are men of sport and they know well how difficult it is to maintain prestigious positions for a long time. Thanks again, Excellencies, for this audience, which fills us with pride and I assure you that we will do everything to find an opportunity to repeat in the coming years. “

Nina Ortlieb is fastest in training at Lake Louise