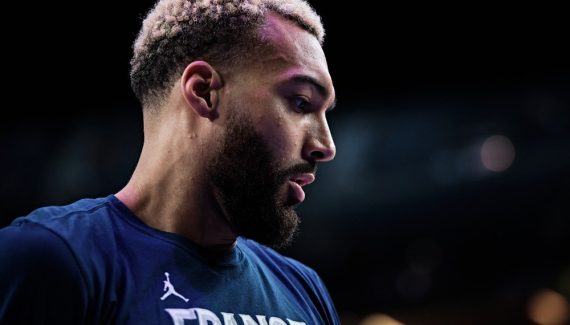 Before flying to the United States and turning completely to the new NBA season, his first among the Wolves and its first in a different jersey than that of Jazz, Rudy Gobert stopped at our microphone to take a final look at theEuroBasket.

A Euro which obviously ended on a bad note for the France, dryly beaten in the final by Spain and who had to settle for a silver medal. Proof that money does not (always) bring happiness, because the Blues had come to Germany to leave with gold around their necks, and nothing else.

In any case, this is what Rudy Gobert, the French vice-captain, told us a month ago. A few weeks later, we can not say that his fifth international medal fills him completely. Even if, at 30, she at least motivates him to progress further, to finally triumph collectively.

« It will help us for the future, we will come back even stronger. »

— Between the Olympics and the EuroBasket, it now makes two consecutive defeats in the final for France. Which hurt you the most: that of 2021 against the United States or that of this year against Spain?

« It’s hard to compare. I can’t speak for everyone, but I think many will respond [la défaite] this year, because it’s the Euros and it wasn’t Team USA opposite. But a gold medal at the Olympic Games is still something incredible… Afterwards, you lose a final in any case, so it’s hard to take and it motivates you to come back better. »

— Against Spain, you failed to weigh as in previous games (6 points and 6 rebounds in 27 minutes). How much did the Spanish defense hinder you?

« We didn’t manage to put the ball inside like we would have liked. [Les Espagnols] succeeded in destabilizing our passing game and imposing forced situations on us. For my part, I was not aggressive enough. But it motivates me to progress more, to no longer depend so much on the players around me, to allow my team to win and to weigh even more on the game. »

— How do you explain your collectively failed start to the final, which then forced you to chase after the score throughout the match?

« It’s a story of small details, such as unsteady and insufficiently precise passes. I wouldn’t say we missed it [de notre finale]because it is also Spain [qui a joué un rôle là-dedans]. I haven’t watched the game yet, but I think I will watch it again in the near future, to understand and analyze what made us thwart at the start of the game. Because [les Espagnols] took the lead quickly and, even if we pick up in the third quarter, we unfortunately run after the score, so it was hard. In addition, we felt that they were having fun, unlike us, because we were up to 20 points behind… »

— In a way, wouldn’t this Euro 2022 final against Spain remind you of the 2019 World Cup semi-final against Argentina? Where you had already lost against a more disciplined team, collectively irreproachable and who punished each of your mistakes…

« I see the idea, but I don’t like to compare the two contexts. Without wanting to find excuses, when we face Argentina in 2019, we were rinsed. We had beaten Team USA and, the next day, we got up at 6 o’clock to catch the plane, while the Argentinians had been waiting for us quietly at the hotel for a day. There, we face Spain who, tactically, put us in check and took us out of our rhythm, our comfort zone. We never managed to play our game. There were some good sequences, in particular to pick up the score, but between our loss of ball and their address, it hit us. »

— Did the lack of additional creators on the team fail you?

« Clearly. Already, you can’t replace experienced players like Nando [de Colo] and Nicholas [Batum] for example. They are present at each competition and they have been there since my debut in the French team. It’s when they’re not there that you realize that everything gets a little more complicated. But these transition periods like this are part of the sport, no one is forever. It gave us the opportunity to progress and that’s something positive. We gained experience and we were pushed to our limits without our facilitators. So it will serve us for the future, we will come back even stronger. »

« No matter what, I’m here to win and that will never change. »

— Finally, wouldn’t this defeat in the final of the Euro be the biggest failure of your career?

« There are two ways of seeing things. It’s obviously frustrating to miss this new gold medal opportunity, but nothing happens by chance in life. It motivates me to go the extra mile and I know I have to do it, to be the player I know I can be. Sometimes these defeats create in your head this little spark that allows you to do what is necessary to cross [ce cap supplémentaire]. So if I have to lose two finals in a row to reach this level, that’s fine with me. »

— How do you perceive the possible arrival in the French team of players like Joel Embiid and Victor Wembanyama? Especially since they are playing your position…

— You are one of the captains of the Blues but, in the event of the arrival of these two players, your role may change. Are you comfortable with this potential change?

« As I said, we will see when the time comes, things are constantly changing. For the moment, these are only hypotheses, so it’s hard to say anything about it. Whatever happens, I’m here to win and that will never change. »

« I will be able to be in a different position from the one I had at Jazz. »

— What’s next for you now that EuroBasket is over?

« I’m going to stay a few days in France to rest, then I’m going to go back to the United States, for Wolves’ Media Day. […] My presence counts, it is important to show that I am present directly. There, I know that all my teammates are already in Minneapolis, they were watching my games together, it was cool. They sent me photos and messages during the tournament, it made me happy to see their support. »

— Earlier you were talking about the kind of player you think you can be. We have seen this summer that when you receive good balls in attack, you can score 15-20 points in a game. Has your offensive use been discussed with your new coach, Chris Finch?

« Sure. [Les Wolves] know what I’m capable of offensively and they also know that confidence is something magical. When you give a player confidence, he is able to shine and exploit his full potential. So I think I will be able to be in a different position than I had at Jazz and it will be beneficial to the team in the long term, in addition to being beneficial to me. »