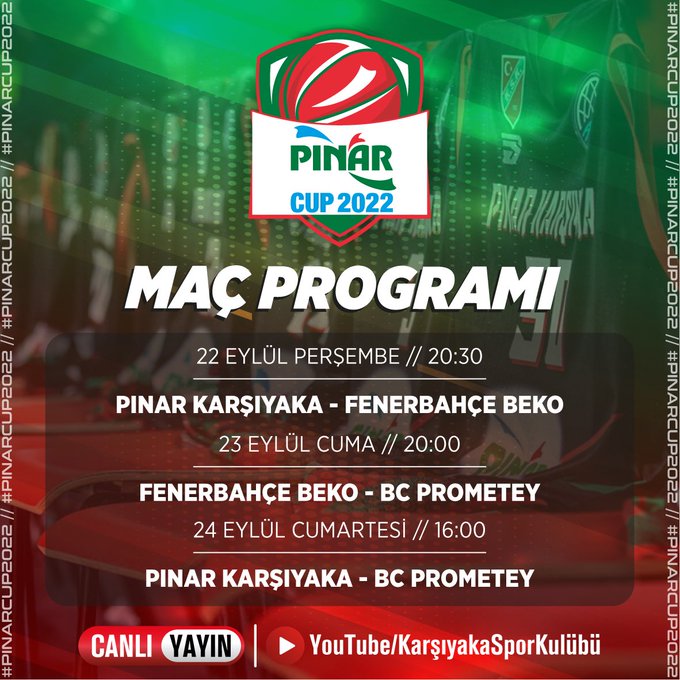 Organized by Pınar Karşıyaka, Pınar Cup 2022 starts on September 22. The match schedule of the tournament has been announced!

The participants of the Pınar Cup 2022 tournament hosted by Pınar Karşıyaka and the match schedule have been announced. In addition to host Pınar Karşıyaka, Turkish Airlines Euroleague teams Fenerbahçe Beko and 7DAYS EuroCup team Prometey Slobozhanske will participate in the tournament.

Fenerbahçe Beko, who brought Dimitris Itoudis to the head coaching staff and added star names such as Nemanja Bjelica and Nick Calathes, will do their last rehearsals before the President’s Cup.

Pınar Karşıyaka, one of our Basketball Champions League representatives, who renewed her contract with head coach Ufuk Sarıca and strengthened her staff with names such as Erick McCollum, will make final preparations before the leagues open.

Ukrainian team Prometey Slobozhanske, which completed the last season in the Basketball Champions League, will continue the season in 7DAYS EuroCup this season.

Pınar Karşıyaka, Büyükçekmece Basketball, Beşiktaş Emlakjet and Bosnia and Herzegovina team Igokea were the participants of Pınar Cup 2021, which was held last season. The winner of the four-team tournament was host Pınar Karşıyaka, with Igokea in the second place, Büyükçekmece Basketball in the third place and Beşiktaş Emlakjet in the last place.

Pınar Cup is very close to 2022! Here is the match schedule of the tournament 🗓️💚❤️ pic.twitter.com/TosteLykeR