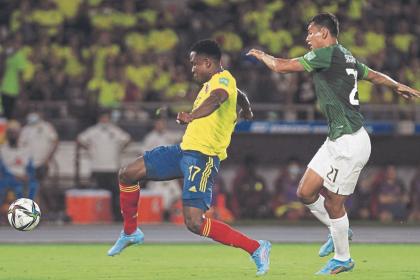 It was not difficult for Luis Fernando Sinisterra Lucumí to join the Premier League after his time at Feyenoord Rotterdam. The man from Cauca became a new Leeds United player amid the doubts of several close associates of the club who strongly criticized the team’s signings. They were branded as nobody, but little by little, the Colombian began to win over followers and journalists.

Unfortunately, once he arrived at Leeds, he suffered an injury in pre-season play in Australia. Upon recovery, Luis Sinisterra debuted with a goal in the Carabao Cup with a long-distance shot. And then he also celebrated in the Premier League in the draw against Everton and in the 5-2 loss against Brentford. His goals created a stir in the English league, and were nominated for best goals of the month of August.

Like Luis Díaz, joining the most competitive league was not difficult for Luis Sinisterra. His teammates shield him, as well as Jesse Marsch, and now he found allies in fans who dedicated a song to him, and former players like Noel Whelan who went through Leeds United. Whelan is currently engaged in the English media, being a commentator for the club.

Noel Whelan gave an interview to the Football Insider medium and praised Luis Sinisterra. His three goals, one in the Carabao Cup, and two in the Premier League have generated great comments from the press and Whelan maintained, “he has already scored against Barnsley, Everton and he has done it again with another fantastic finish. It’s another goal from outside the box. The start in the Cup gave him confidence and now he has become a big part of this team”. In turn, he concluded, “he’s showing confidence with his ability and it’s great to see.”