Kim is the essential of football, a courageous and correct soldier 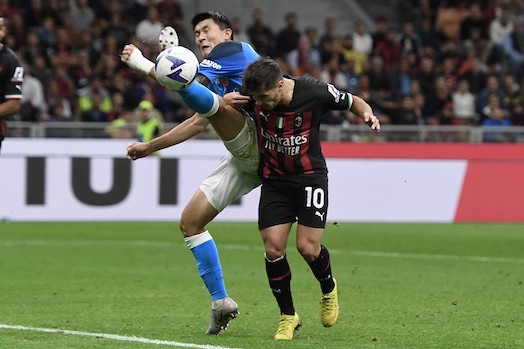 Avoid goals with nonchalance. Sweeps in lateral foul. He commits very few fouls (one in Milan). Don’t waste. Stoppa like in basketball. Comrades love it

Milan, San Siro stadium, Sunday 18 September. Kim Min-jae is the first Napoli player to touch the ball (after just six seconds from a long throw by Tomori) and the last to make a decisive intervention (at minute 96): with a stretched leg he closes the mirror of the door to Brahim Diaz with a head that hits with a sure blow and already anticipates the roar of the Meazza. But Kim sticks to him like a postage stamp. The of him is not a simple marking. It is an understatement to define it this way. Also because the distance between oneself and the opponent is never, never, greater than fifty centimeters. His is a basketball-style block. And rightly celebrates it as if it were a goal. Because so it is.

It’s the 59th touch of Kim Min-jae’s match. A defense museum performance. Mourinho once said that Bonucci and Chiellini should have taught “a university course at Harvard for how they defend. They are fantastic, absolutely fantastic ». Here is now that Chiellini is in fact retired, his chair at the faculty should be taken over by this one meter and ninety centimeters Marcantonio. Who – Napoli fans plug their ears – we can consider Chiellini’s Korean heir. Definitely less foul, we add.

Sunday night in Milan was yet another formidable performance by this 25-year-old central defender, almost 26, who made his debut in Napoli and Serie A just forty days ago and acts as if he has been playing for years. Player who in addition to having already scored two goals – is part of the ornament – embodies essentiality. It is very rare to come across Kim’s stylistic squiggle. Less than ever in a gamble. Interpret the game as if it were a mission: do not get dangerous balls to get to Meret’s side. Despite being gifted with a polite southpaw and excellent fundamentals. He is not technically rough at all. He is by no means a defender who goes into crisis with the ball at his feet, quite the contrary. Action can serenely start from him. But on the field in his eyes we can read the concentration of the soldier in battle. And as such he behaves. Furthermore, during the games he is the protagonist of a now archaic gesture in contemporary football: he throws the ball into a lateral foul. That gesture that once in the stadiums was summarized by the onomatopoeic bububum which is the equivalent of the animated drawing of a gentleman who throws away the danger and the ball. A technical gesture that is accompanied by olfactory reminiscences of Borghetti coffee. It’s a time machine.

There would be countless artistic references for Min-jae. From the overused Pulp Fiction cleaner, played by Harvey Keitel: “I’m Wolf, I solve problems.” To Bud Spencer who in the movies gets rid of his opponents almost nonchalantly. Marco Mengoni could have dedicated “The essential” to him.

In his analysis for the Napolista Alfonso Fasano wrote:

In those same minutes (from Simeone’s goal onwards), Kim Min-jae put the definitive counterpoint to a truly extraordinary performance. With the rescue we have already mentioned, but also with the last defensive events of the evening. His figures, in this sense, are monstrous: 3 tackles won, 4 shots rejected and even 11 balls swept away during Milan’s offensive actions. Plus a foul committed, which is part of the package. It is enough to do a simple division to realize that the South Korean has made a defensive intervention every five minutes of play. It is as if Milan, playing against him, were hit on a rubber wall every 300 seconds, a rubber wall capable of rejecting and spitting out every ball, every opponent. Any danger.

We Milan-Napoli have reviewed it. Just to enjoy Kim. If you had missed it on TV, the photograph we have chosen perfectly conveys the idea: the look and the body language of Anguissa who speaks to him at the end of the game, are typical of those who are congratulating. Of those who are offering their compliments mixed with thanks. As if to say: you saved our lives. 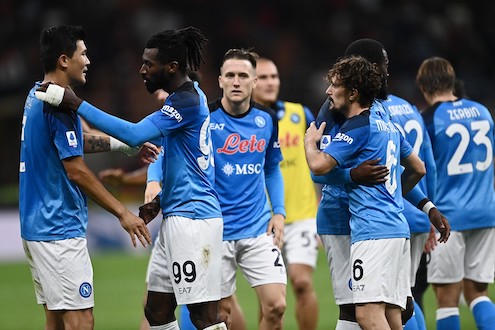 In the eyes, thanks above all to social media, the exultation of the South Korean obviously remains immediately after the decisive intervention: the block on Diaz. It is important to dwell on this gesture for a moment.

At 96 minutes the ball is at the edge of the area, moved to the left, on Bennacer’s feet. Which sees Brahim Diaz alone in the area almost at the height of the penalty spot. Kim has time to turn to his left and see Giroud standing outside, in the box, past Elmas. Brahim Diaz, on the other hand, is alone inside. Kim turns and in a nanosecond decides that the main danger is represented by the number 10 of Milan, Giroud can wait. And in fact it is Diaz that Bennacer serves with a ball that wants to imitate that of Mario Rui for Simeone. Bennacer crosses, Brahim Diaz gets greedy and goes to the ball ready to hit him. In his memory he is alone, he has no Napoli player around. He doesn’t imagine that Kim is coming in the meantime. The defender is late, he knows it. And then just as sprinters or athletes in general throw themselves with their chest on the woolen thread, he throws his usual straight leg. Which obviously has radar. And he intercepts the ball hit by the Spaniard with his head. Brahim Diaz probably strikes with his eyes closed. He expects the roar and instead hears another blow too soon. It’s Kim’s leg that intercepts the ball. Brahim puts his hands in his hair, he knows that he took away the goal. He is desperate.

Kim is the essential of football. It is for a defender what Pippo Inzaghi was for an attacker.

In 97 minutes Kim commits only one foul: in the 59th for pushing against Giroud. Then, he faces it with fairness. Many times anticipated, sometimes immediately as on the occasion of the goal (where he went to close on Theo Hernandez who drank Zerbin) or in the first half on the crossbar hit by the French thanks to Meret’s magnificent deviation. Cross hit at the end of an action born from a lost ball by Kvara, an episode that contributes decisively to the failure of the South Korean to reach the optimal position.

His game is impressive in terms of position and concentration. A chess player’s ability to concentrate. He is very wrong, we could almost never say. At the 16th a simple pass for Kvaratskhelia and at the 44th a back pass that forces Rrahmani to retreat to recover the ball. Only once, at the beginning of the game, he does not check with his thigh and puts it in the corner: only because his vision is obstructed and he does not see the ball coming out of him suddenly.

We do not go so far as to say that he takes them all. But he certainly intercepts many. Lots of them. Those rare times that the Frenchman manages to hit, it is inaccurate because Kim is always there a few centimeters, as if he were a mirror.

In videogames Kim would be represented by the image of a warrior who with his sword protects the fort and strikes and frightens anyone who takes the risk of approaching.

After only eight minutes of play, he slipped on Saelemaekers in an area terribly on the border between the penalty area and its limit. Very risky surgery. He takes the ball clean and off.

Eight minutes later, he intercepts a ball still destined for Saelemaekers and performs in the vintage number already described: advance and ball in lateral foul. The pass-to-me-pass-to-you we do it tomorrow. Come on another one.

The number is repeated on the 31st. Tonali wanders dangerously at the edge of the area, sees a corridor and serves Krunic who comes from the left – what they now call a holed up. It is a clear scoring opportunity. But Krunic does not deal with the giant that appears in front of him and stops once again, this time as in volleyball, and deflects sideways. Always with the leg. And he shows another attitude of him: with disarming simplicity he thwarts a potentially very dangerous opportunity. And maybe they don’t even notice from home. All he misses is the gesture that is usually done with the hands when getting rid of something that annoys. Like Bud Spencer at the end of a fight.

Undetected rescue is one of the house specialties. He also shows it in the 62nd when with apparent nonchalance he once again opposes his outstretched leg to the shot in the area of ​​Saelemaekers. A potentially very dangerous shot. Here, too, the intervention passes almost in silence. He hardly notices it but without her leg maybe that ball would end up in the goal.

As well as the 74th – it is 1-1 – uproots the ball from the feet of Messias. The Brazilian asks and gets a triangle from Giroud, starts to move forward but in the meantime ours leaves the French for a moment and takes the ball back. Like an adult with a child. Messias does not even realize what happened, he saw him a fraction of a second before near Giroud and immediately after taking the ball away from him.

Do you want to know how many times Kim anticipates Giroud? They are almost uncountable.
In the second minute he sweeps a ball served to the Frenchman in a lateral foul (a ridaje).
At the eleventh he anticipates him with a header in mid-field and Olivier remains there to ask for the foul.
At the 29th, always leading the Rossoneri relaunch
And again: the 49th, the 59th, the 67th, the 80th. At the 83rd it is not clear whether you push him away or the Frenchman by mistake. He also unravels in the 92nd, he was offside but you never know.

At the final whistle Kim is the first that Meret goes to hug. She goes out the door, runs after him. She looks for him. And not only cheers. She thanks him. If avoiding a goal is metaphorically equivalent to saving his life, Meret knows very well who was his guardian angel. 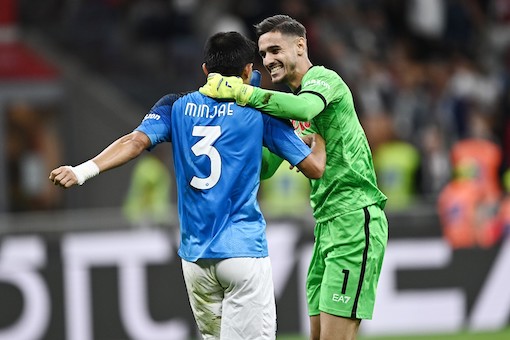