Freddy Guarín: what scandals could have led the footballer to the crisis? – People – Culture 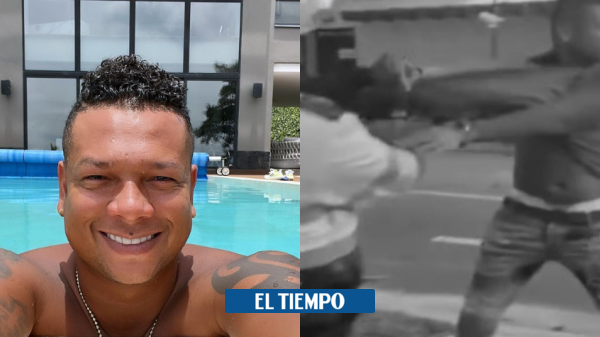 Passion and identity are two words that indisputably define Colombian football. However, the list can also be added to the debauchery, scandals and controversies that players with extensive professional careers have starred in. Fame always comes with a price, which is sometimes very expensive. This is well known by some athletes whose popularity has taken its toll.

The crowd erupts in cheers as, impassive and heroic, the soccer players enter the field to dispute another victory. For the fans they are more than professional athletes, they are living legends in whom they place all their faith and hope. However, both in life and on the courts, reality is not always rosy. In most cases, behind those footballing feats, there is a past in which vices, mistakes and ‘sins’ take precedence over triumphs.

And if there are still doubts about it, Freddy Guarín is the latent proof that not even achieving success exempts someone from hitting rock bottom. The Colombian soccer player has been involved in various media storms and not precisely because of his good performance on the pitch.

After his sudden departure from Millonarios in July 2021, the midfielder’s appearance on the sports radar has been almost nil. On the contrary, he has shown himself more than ever enjoying pleasant moments with Jacobo, the son of the relationship he had with the model and presenter Sara Uribe.

However, a recent publication on Instagram by the footballer has set off the alarms again. In the midst of tears and a photo in which he is seen with a bad face, Guarín confessed that he would not be having a good time in his life.

Given this situation, it would be worth remembering what scandals could have led the player from Boyacá to enter into a crisis.

While he was still part of the ambassador team, the Colombian soccer player starred in an unfortunate show in which, in an apparent state of drunkenness, he was arrested in Medellin for assaulting several of his relatives.

In an interview with national media, the then director of the National Police, Major Jorge Luis Vargas, gave more details of the event that took place in early April 2021.

(Of interest: Fredy Guarín: bonuses he received in Millonarios, according to the portal).

“When the agents arrived at the scene, they found a fight involving the son (Guarín) and some injuries inside a house. They acted very professionally, the parents asked for assistance and we are in contact with the Prosecutor’s Office to determine the steps to follow “, clarified the police authority.

The moment in which Guarín had to be forcibly removed by a policeman from his parents’ house was captured on video. Apparently the midfielder would have hit his father, so his relatives would have been forced to call the police to report a possible case of domestic violence.

After the controversial event, the boyacense player was transferred to a health center to evaluate his state of healthbut not before having a strong discussion with the uniformed men who were carrying out the mission of transferring him to a clinic in the neighboring town of Envigado.

There he behaved inappropriately and began to verbally and physically assault the police officers and the medical staff and nurses.

“There he behaved inappropriately and began to verbally and physically assault the police officers and the medical staff and nurses. He had to reduce it again through the legitimate use of force so that he would be treated ”assured the then commander of the Aburrá Valley Police, General Pablo Ruíz, to national media.

(We recommend: Scandal: Freddy Guarín stars in a violent fight).

A wave of criticism, rumors and speculation cast a shadow over Guarín’s football and personal future. However, there were many celebrities who did not hesitate to show their support for him. Among them, his ex-partner, Sara Uribe, with whom he had a controversial relationship.

“I will keep this image forever, because you are the father of my son and you will continue to be the ‘Guaro’ of the people. Strength, champion. You will be reborn as the phoenix. You were there to support me and here we are. Forever, panas”was the message with which Sara Uribe accompanied an image in which the soccer player kisses her on the forehead after the birth of her son Jacobo.

Millonarios also joined the chain of support for the midfielder and through an official statement sent a message in which he “sadly regretted” the events that occurred with the player who, at that time, was already in the eye of the hurricane for having missed one of his training sessions on March 29 prior to the incident.

“We will be by your side so that you receive the professional help that can get you out of this critical moment”, The Bogota club expressed on Twitter and added: “He has given a lot to Colombian football and we will always appreciate his love for Millonarios”.

Some time later it became known that Fredy Guarín ended all ties with the team that gave him so many wins at the professional level, Millonarios. After several months away from the courts, the boyacense player reappeared in October 2021 in an Instagram broadcast in which he made it clear that “he had not hung up his guayos”, but that he only needed to get in shape to return, better than never, to the courts.

(You may be interested: This is what the Millonarios players said about the Guarín situation).

“I can’t say I retired from football because now I’m healthy. It would be to lose a few pounds again and voila”, said the former 2014 world champion before the camera. However, that never happened and instead of accumulating triumphs, his career plummeted.

The scandals seem to have no end for the Colombian player who, just over a month after being arrested by the authorities for having a confrontation with his relatives in Antioquia, was once again involved in a controversy. This time, the party and the lack of control would be the cause of him being in trouble.

On Thursday, May 20, 2021, the newspaper ‘Entre Ceja y Ceja’, which is in charge of covering the most important events that affect the community of Rionegro, Antioquia, warned that several residents of the Hoyito sector in Llanogrande denounced a scandal in the farm of the former member of the Colombian National Team. Apparently, detonations of what appeared to be a firearm were heard inside the property.

(Also read: Guarín tells how he lost 14 kilos: a meme was his great motivation).

The strange sounds sowed fear in the community, so they decided to go to the authorities. Before the alarming call, the police quadrant entered the soccer player’s estate. However, they did not find traces of any artifact that could put the safety of the Antioquian inhabitants at risk. Apparently, they only turned down the music and the party continued until the next day.

Andreina Fiallo and Sara Uribe: two loves that did not prosper

Even in the most stable couples, infidelities, insecurities and problems make their way to end, little by little, the love that was believed indestructible. Andreina Fiallo and Freddy Guarín are no exception to this equation.

The couple, who had been in a relationship for more than 15 years, saw the end of their romance in 2017 when they officially announced their divorce. Immediately the rumors of an infidelity on the part of the soccer player began to overshadow the national and international media. It would be the Paisa model and presenter Sara Uribe who was accused of interfering in the relationship between the athlete and his wife.

With the end of the marriage came the officialization of the relationship between Uribe and Guarín, who wanted to lay the foundations for their love in China, a country where they settled for a while.

(Also: Sara Uribe says that the trip to China with Freddy Guarín was a mistake).

An accumulation of dreams behind her back and overflowing desires led the ex-protagonist of the 2012 soap opera to pack her bags and abandon her television career to seize a future with her new love. The difficult moments were not lacking, as were the criticisms of hundreds of followers who did not approve that Freddy had left his wife for an “affair” with the model from Antioquia.

Although both -Sara and Freddy- assured that their relationship began after the divorce with Andreina, the latter gave some statements that led fans to think otherwise. In an interview given to the television program ‘La Red’, the Venezuelan woman stated that: “Unfortunately there were many external factors for my marriage to end.” These words were immediately associated with Uribe and her romance with the former 2014 World Cup player.

Between goings and comings, Uribe and Guarín faced all the obstacles. Fruit of their love, Jacobo was born in 2019. Just a year later, at the beginning of 2020, the couple announced their separation without giving any explanation to their followers. Everything seems to indicate that they continue to have a good relationship for the well-being of their son, with whom Guarín has been seen sharing a lot lately.

However, it was not the same thing that happened with Andreina. In December 2018, the Venezuelan model announced on social networks that the player was preventing his children from leaving the country.. “An authority tells me in front of my children that they are prohibited from leaving the country, not because I have traveled illegally, even if they want to make it happen that way, but because they have left a note in the system,” he said at the time.

Even, on one occasion, the Brazilian press leaked some alleged lawsuit documents against the player by his ex-partner Andreina. Currently, there is no evidence that Fiallo and the midfielder have a bad relationship, on the contrary, they have been seen in photos sharing with his two children.

Guarin in crisis: ‘A man full of vices, errors and sins’

An image has worried the hundreds of followers of the football feat. With tears in his eyes and an obvious expression of sadness, the former Millonarios player reappeared this Thursday on his social networks to leave a message in which he reveals the difficult personal situation that he is currently experiencing.

From time to time my life is changing enormously. These tears that you see in the photo are from a man full of vices, mistakes, sins and many more things

“Today I want to show myself as I am, with an open heart. I’m not doing this to generate pity or generate followers. I do it with the intention that it will serve at least one person, ”said Guarín at the beginning of his message.

(You may be interested in: Sara Uribe, who is already all the rage on networks).

And he added: “From time to time my life is changing enormously. These tears that you see in the photo are from a man full of vices, mistakes, sins and many more things…”

Apparently the footballer is playing the most important game of his life, so he did not hesitate to call on Internet users to claim their guilt. “My people, we are in time to open the door to daddy God and let him be the one to guide our soul and heart. God has already forgiven me and I forgave myself, ”he continued his reflection.

Guarin concluded that: “If someone disagrees with this publication, I understand you. Do not stop dreaming, may forgiveness be with love and guided by God our Lord. God bless you today and always, much encouragement and strength, it is never too late”.

Byron Castillo: the latest that is known about the audience in Fifa

Did Matías Mier delete all the photos he had with Melissa Martínez?