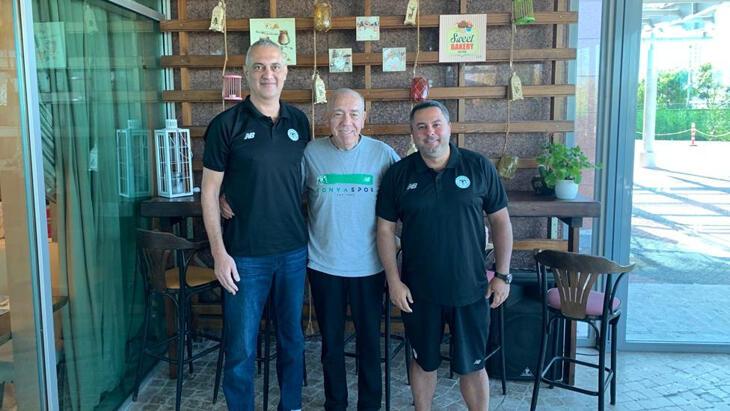 AYOS Konyaspor set its first goal as being stable in the league and then showing up in the European Cups. Making a very important move by appointing Basketball Federation Leagues Director Turgay Çataloluk to the position of Sporting Director, the Green-Whites rolled up their sleeves to make Konya a ‘traditional basketball city’.

Here are the opinions of the names who “guide” the basketball of Konya, the new team of the Basketball Super League, regarding the new season and the new formation:

– After a successful period at Banvit, you worked as a Leagues Director at TBF. What was it that pushed you back onto the field?

Turgay Çataloluk (SPORTS DIRECTOR) “After the Banvit period, I worked for the Basketball Federation for about a year. I was really happy there. I had a good period without having the slightest problem with my job. I missed the field and the adrenaline a little, both because I came from a professional athlete and later on as a professional manager at the club level. The process developed very quickly after Konyaspor was promoted to the Super League and they invited me to manage and support this organization. And I joined the Konyaspor family. Konyaspor is not a distant community or city for me anyway. I wore the Konyaspor jersey for 4 years during my acting period. We had very good days. After that, various structures were formed. In Konya, basketball culture has existed since the past, both on the basis of players and clubs.

However, it has not settled to a certain stability. Now our goal is to achieve this stability. We want to make it one of the traditional city clubs of basketball, which is assertive in basketball, permanent in the league. This was the first thing they told me when we first spoke to both our President and our managers. This also affected me a lot. ‘We look like a football club. But basketball is not our stepchild. Of course, budgets and possibilities are different. But we want to carry basketball to the place where football comes from, both in corporate and sportive terms.’ they said. When we look at it in terms of football, it is a very developed and strong club both in sporting and institutional terms. Frankly, when I saw it with my own eyes, I understood. With its stadium, club structure, administrative units and professional structure, an extremely professional structure has been created that is managed like a company. Creating the same structure in basketball will be our biggest goal. But of course, athletic success is a must for this job…

As Coach said, we will set out in a very tough league with 12 new players. Our job is not easy. In my opinion, I think this season will be a season where the lower group teams will have to fight much harder than the previous years. In general, all teams increased and strengthened their budgets. I don’t think anyone can say that I will win this match. At least it looks that way on paper. There have been some imbalances in recent years, but that won’t happen this season. We formed a staff accordingly and we continue our preparations accordingly. I hope it will be to our heart’s content and we will finish the season in a good place. Of course, our first goal is to be permanent in the league. But mainly we want to go as far as we can go.”

“The influence of the audience in sports, especially basketball, is undeniable. I think it has a 20-30 percent positive effect. Audience support is very important, especially for newly established teams like us that need some time. I think we will provide that. From the moment we provide it, we will fight this struggle as long as we are not injured. I can say that Konya will be a difficult road trip.”

– Where is your target in the Basketball Super League this season?

Engin Gençoğlu (HEAD COACH): “Realistically speaking, our goal will be to stay in the league in our first season. But according to the way things are going, what we really want is to finish the season in a place where we can get a European cup visa. Because after the success in football, the expectation of everyone, the whole Konya community and the fans in the sportive sense has grown a lot. So yes, our job is difficult. In other words, we are a newly established team that has made 12 new transfers. We have to adapt to the league, we have to make ourselves accepted. We need to be able to do that with both our organization and our game. Hopefully, we will try to make ourselves accepted first and be in a place where we can ensure our continuity in the league, and then we will strive to be a team that participates in the European Cup to the extent we can catch up.”

– Of course, building chemistry with 12 new players is hard work. It also takes some luck. What path will you follow to create this chemistry?

“Our biggest goal right now, our primary goal is to create chemistry in the best and shortest way possible. I think basketball comes second. The most important thing is compatibility. Time is what we need most in order to achieve harmony within the team. We are currently trying to determine this time period and get the desired efficiency in the field. It is not easy to adapt and achieve this with 12 new players, a new city, a new team, a new coach, a new system, local and foreign. We are working very well for this. But the harmony in the field and the harmony in the system are not the same thing, of course. The harmony of our players off the field is very good. I can tell the city that they warm to each other very quickly. But we need time to achieve harmony in basketball on the court. We are gradually implementing this. And I believe that we will make the best use of the adaptation process on the field as well as the league and enter the league ready.”

– How do you see basketball in Konya from your point of view?

“I came at the beginning of February last year. It was mid-season. There was incredible interest and relevance. They got me very quickly. Having a very good club structure as an organization, naturally, the road to success became easier for us. The 100th anniversary of the club also had an impact on this. First, there’s an amazing audience here. We filled the 3,500-4000-person hall with almost 6 thousand people. Everyone’s interest and interest in basketball in the city is very high. In terms of management, the interest in basketball is at a high level. We need to separate the Super League from the lower league. After last year’s championship, expectations in the public are naturally increasing… This is the hard part of the job. In a defeat, ‘do we fail?’ anxiety can arise sometimes. I’ve been in this for 25-26 years. Most of the time I was always the assistant coach. Now we have leveled up and our job has become even more difficult. Making 12 transfers, creating a permanent team. The reflection of chemistry on the field shows the value of the coach. When you can reflect this on the field, you are successful. Our advantages are that the audience, the city, the management, the organization are the driving force for the team. Their positive support is very important to us.”

‘WE AIM TO GIVE THE BEST’

There is something that Fatih (Özgöçken) President says every time he visits us, at every meeting: ‘Of course, there is winning and losing on the field. You fight, the rest will come. Konyaspor’s athlete must prove that he has fought very well for this city and gave his all on the field.’ Of course, this is something very important to us. We will reflect a characteristically warlike, struggling, never giving up structure on the field. Being a team that does not lose on the field is one of our most important goals.”

‘WE ARE VERY LUCKY FOR THE AUDIENCE’

“There is a great interest of university youth as well as an audience that knows basketball. We are very lucky in this respect. They give a very good energy to the hall and always make us play in front of full stands. Hopefully, we will meet them with the Tofaş game in the second week of the season and let them watch a good basketball.”

‘WE WILL BECOME A TEAM FLOWING ON THE FIELD’

We will watch a team that is 100 percent mobile and plays basketball fast. We made our transfer in that direction. We did not pursue a player transfer policy that plays in a single position. We were thinking of creating a flowing team, most of which could play both positions. We tried to keep the rotation a little deeper within ourselves. We aim to pass the half court quickly and reach the result with fast paced basketball.”- You are one of the first names that come to mind when it comes to basketball in Konya. How does it feel to be back in the Super League?

“I am very excited about the point that Konyaspor, which I have been working for for 20-30 years, has reached in basketball today. As someone who has also captained this team for a while, I am very pleased to work with our new Sporting Director, Turgay Çataloluk. I sincerely believe that he will add a lot of value to this formation with his experience and knowledge. He is a very experienced basketball man who does his job very well. The current structure in Konyaspor is a very good formation. Basketball Super League is a new excitement for all of us. This makes us very happy. I think we’ve caught our old vibe. Konyaspor has a very valuable chairman and management team like Fatih Özgökçen. Their support for us is also invaluable. When we put all these pluses side by side, I believe that we will give the best on the field and we will be successful this year.”

Matches today Monday, for the Qatar 2022 World Cup: who is playing, schedule and TV