Activities of the National Olympic Committee (Archery): The Ivorians champions of the West and Central Africa zone honored 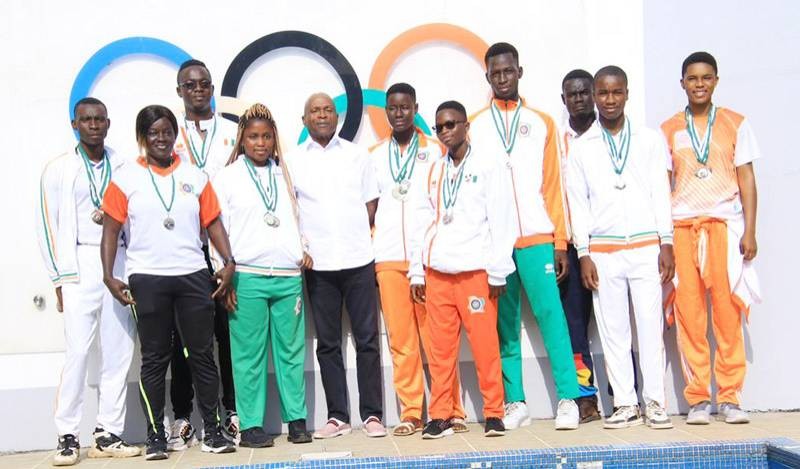 The Ivorian Archers who returned with 18 medals from the 12th edition of the international tournament for the West and Central African zones of Archery (Tizocata 2022), from September 7 to 10, in Cotonou (Benin) were at the honor on Thursday at the headquarters of the National Olympic Committee’s Executive Committee.

President Georges N’Goan, stuck to his choice of placing the athlete at the heart of the NOC’s projects, found the words and the way to say thank you, on behalf of the great Olympic family.

“It is always with great joy and pride that we receive all the athletes who bring honor to our country. We created this forum at the NOC, since we have been here, to tell you that wherever you go, whatever the playing surface on which you perform, you are not alone. We follow you and are always with you in heart. This platform, I say, is there to congratulate you and encourage you to go even further”, indicated the President of the NOC, Me Georges N’Goan, who was particularly delighted with the presence of several young girls among the medalists. He asked them not to give up and work harder for the next Olympics in Paris.

Fatou Gbané, an Ivorian archer, did not fail to salute the initiative of the new NOC Côte d’Ivoire team. “When you come back from such an expedition and you are received, as was the case this Thursday at the NOC, it goes straight to your heart. It is a sign that the country is watching us. Thank you to the NOC who recognizes our merit. Indeed, we gave ourselves a challenge in Cotonou and we managed to obtain an average of 9.5 out of 10. It was great! “, rejoiced Miss Gbané.

This Tizocata brought together 60 archers at General Mathieu Kérékou’s stadium in Cotonou and the Ivorians did not tremble. Having received state-of-the-art equipment, and well supervised, they relegated the host country, Benin, to second place, with 16 medals. Guinea finished 3rd, with 7 medals.

Enough to encourage the leaders of the Ivorian Archery Federation. “In Cotonou, above all, we demonstrated our leadership throughout the West and Central African region. For nearly 12 years, we’ve been the best. This is rather reassuring about the Paris Olympics in 2024,” said Yo Elien Tagro, vice-president of Fivta.